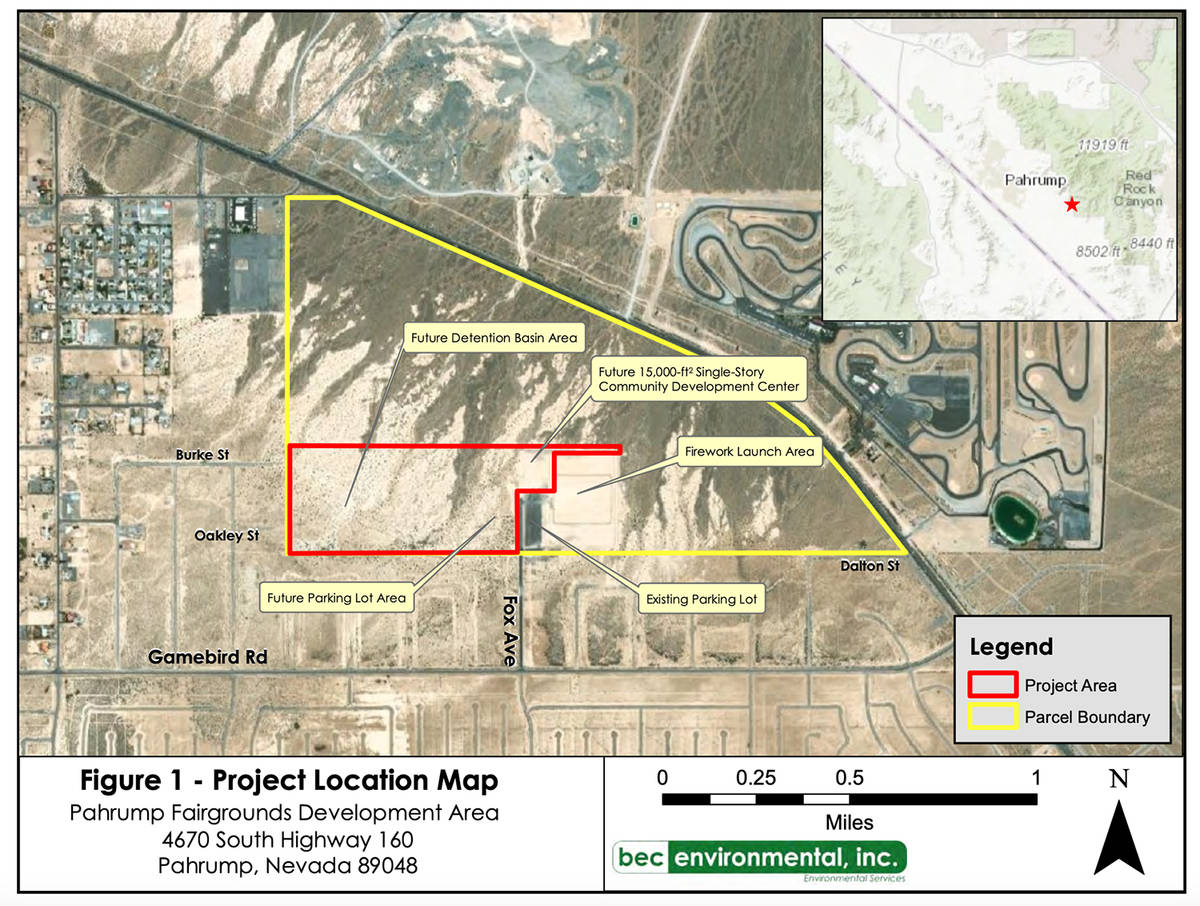 Special to the Pahrump Valley Times This photo shows a project location map provided in documents relating to the development of the Pahrump Fairgrounds and shows where the detention basin will be located. 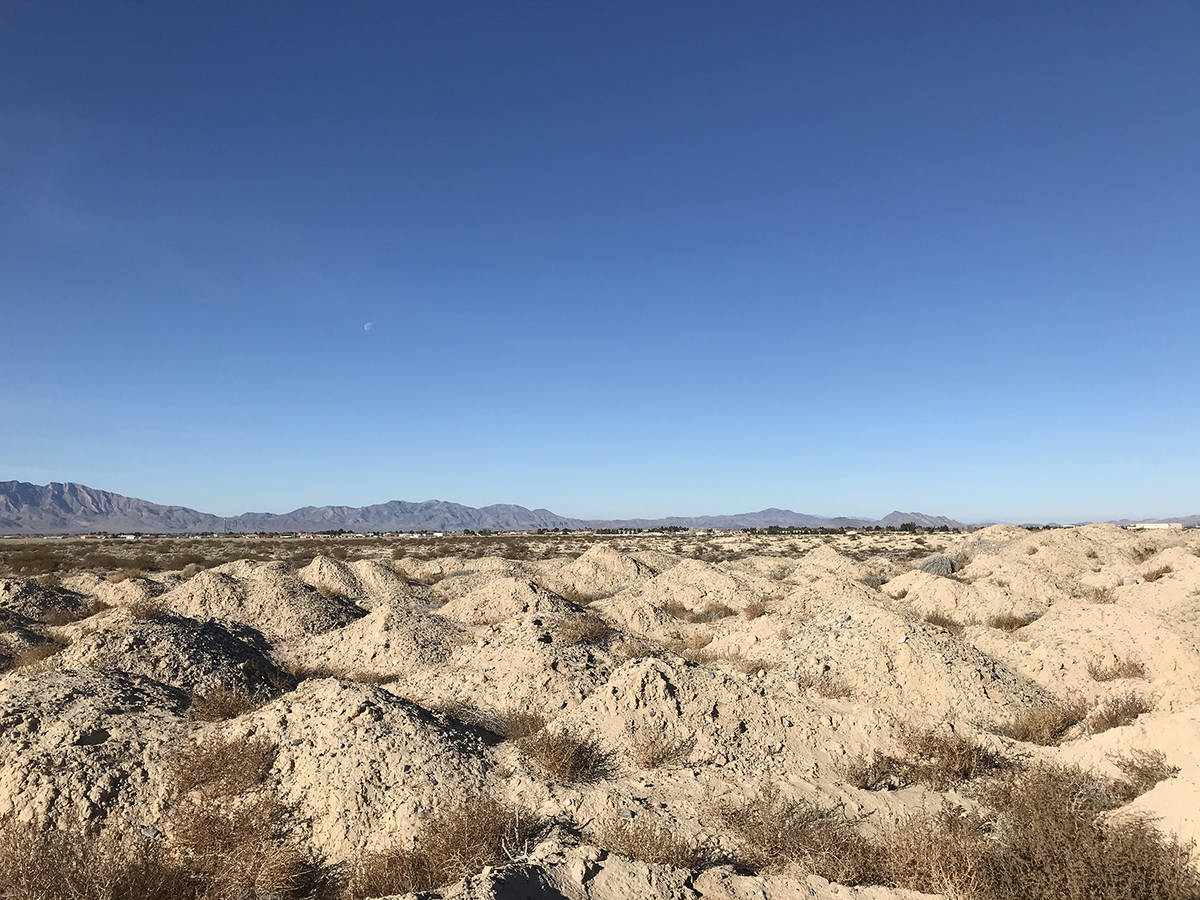 Robin Hebrock/Pahrump Valley Times The view of the Pahrump Fairgrounds to the west of the Pahrump Fireworks Shoot Site, where a detention basin is set to be constructed.

Construction crews will be heading out to the Pahrump Fairgrounds sometime in the near future to undertake the next step in development at the site, with a detention basin and drainage ditches to set the stage for what is envisioned to one day become a major recreational destination in the valley.

The detention basin project is one part of the multi-phase development plans for the Pahrump Fairgrounds, which consist of 427 acres of land running southeast from Highway 160 and E. Dandelion Street to Gamebird Road.

Currently, the site contains an access road, parking lot and the Pahrump Shooter Site, where residents and visitors can go on select days throughout the year to safely and legally launch aerial fireworks.

The fairgrounds is expected to eventually include fields for sports activities, a rodeo arena and exhibit halls, with plenty of room for even more possibilities in the future.

The fairgrounds has been given some major financial help along the way with Community Development Block Grant funding. To date, over $1 million in such grants have been awarded to the county for the development of the fairgrounds and the detention basin project will utilize just over $333,000 of that funding.

The construction contract for the detention basin project was recently awarded by the Nye County Commission, which addressed an agenda item regarding the contract at its Oct. 6 meeting.

Nye County Commissioner Leo Blundo made the motion to award the contract to Patriot Contractors LLC, noting, “I’m happy to see that we’re moving forward on the Pahrump Fairgrounds. I think the board has pretty well articulated that that is a priority and we’re trying to build it up. And coming out of COVID, I can’t wait to see the fairgrounds in full bloom, that’s going to be a beautiful thing.”

Nye County Commissioner Donna Cox then kicked off the discussion on the agenda item, stating, “I understand that Patriot is the cheaper of the two, but they are out of North Las Vegas and there is only a difference here of about $62,000 and I think it would be of benefit for the county to take a big consideration of that fact and award this to Wulfenstein Construction, because God only knows, we need work out here and we need the money circulating out here.”

Commission chairman John Koenig jumped in to explain that though he would agree with the idea of keeping the contract local, Nevada Revised Statute is specific on this situation and the law simply would not allow the commission to do as Cox was recommending. There had been three bids submitted, one from Patriot Contractors for $333,421 and another from Wulfenstein Construction at $395,968 while the third bidder, Aggregate Industries, came in at $689,000.

“NRS 338.1389 requires the county choose the best bid. The best bid must not be greater than 5% of the lowest bid, so that puts everyone else out of the running,” Koenig stated.

Nye County Purchasing and Contracts Administrator Danielle McKee confirmed that was correct and noted that the granting agency had also reviewed and given their stamp of approval to the county’s selection of Patriot Contractors.

Cox then turned to the possibility of change orders, work that may not be part of the original scope of the contract and might be added on as the project proceeds. This, however, was not likely, McKee informed, as the scope of work had been created by an engineering firm and was highly detailed. “We don’t do change orders for something that a contractor says, ‘I didn’t bid that’ even though it was in the scope of work,” McKee stated. “If we ask for anything in addition to the initial scope of work, that’s the only time we’d process a change order.”

Several meeting attendees chimed in during public comment to add their support for choosing Wulfenstein Construction as well, but representatives for the local construction company itself said while they were thankful for all of the support shown that morning, they understood why the county could not award the contract to them.

The motion to award to Patriot Contractors passed 4-1 with Cox the sole voice against.

“Nye County is developing drainage infrastructure to accommodate future growth in the development of the Pahrump Fairgrounds. The plans provided by Dyer Engineering reflect the design of a network of drainage ditches and a detention basin that will control stormwater runoff,” information outlining the purpose of the project explains. “The basin will consist of a controlled outlet structure including concrete weir and pipe. The outlet structure will discharge into a channel that will openly discharge into the existing roadway cross-section of James Avenue, leading down to the existing channel running parallel to Gamebird Avenue. Future development of the roadway and neighborhood will later encompass a confined system to convey water from the detention basin to Gamebird Avenue.”

As detailed by the cost breakdown included with the bid submitted by Patriot Contractors, mobilization and demobilization for the project will cost $23,000. Clearing and grubbing the land comes at a cost of just over $9,000 and excavation of the detention basin itself, as well as accompanying ditches, represents the largest expense at $149,322.

The contract calls for a performance period of 60 calendar days from the date of the notice to proceed . The notice to proceed has not yet been submitted to Patriot Contractors but McKee told the Pahrump Valley Times that the county is anticipating a start date of Nov. 2.