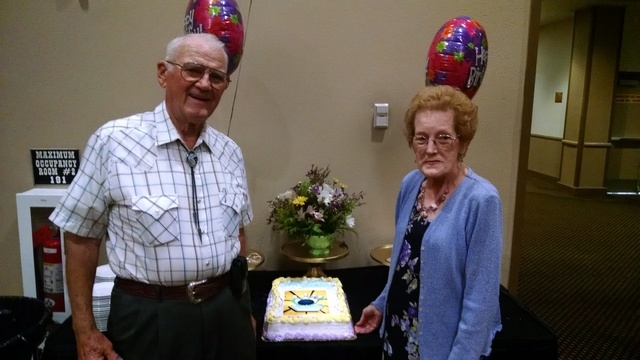 The business of dealing with death can be tough for those involved, so it takes a special someone that can stomach tragedy on a daily basis.

Mildred Janssen, owner of Pahrump Family Mortuary, bought the business in 1996, after she saw a lack of compassion by the previous owners when her husband passed away. She worked for them as a secretary for two years before buying the place off them.

The mortuary was originally located on Calvada Boulevard, but moved it to its current location in 2001 after needing more room. Families come from all over Nye County from Beatty, and Tonopah to Amargosa Valley and Goldfield in Esmeralda County.

Tim Wilmeth, executive director of the mortuary, explained the business is involved in the entire process of taking care of someone who passed away from visiting the site where the person died and picking up the body, helping those in charge of the body with the paperwork and arranging the final wishes for the deceased whether it be burial or cremation.

“We are here in service of the families, that what we do,” said Wilmeth, who re-joined the business five years ago after previously working with Janssen in 1997.

Wilmeth help organize a community-wide birthday party for Janssen’s 80th, which was held Sunday at the Pahrump Nugget Hotel and Casino.

Running the mortuary encompasses a vast array of job duties, as one second they could be handling customer service or paperwork and the next they could be prepping a body for a funeral. As much as any other task they perform, acting as a counselor to the family members of someone who recently passed is something Wilmeth said they carry out as much as any other aspect of the job.

“Sitting down with families when they come in, and it isn’t just deciding when and where they want to have the service, it’s also sitting down with them to make this process as painless and seamless as possible,” he said.

With people passing away in a variety of ways, Wilmeth said they have to treat each family differently, as some families are more distraught than others.

“So there is a lot of counseling involved, we have to gauge our interaction with people,” he said. “When someone comes through the door, you have to start reading them right away. Are they really upset, or were they expecting this and knew this was coming? Are they OK, are they going to get through this fine?

In addition, Wilmeth explained that they also handle the prepping of the bodies, which most people would rather keep a blind eye too.

“Of course we do the back of the house stuff too, which everyone would rather not know what goes on back there,” he said. “Somebody has to get everybody dressed, get their makeup done and get them in caskets for casketed funerals.”

Wilmeth said that the recession didn’t hurt their volume as in most industries, but it did increase one way to handle a corpse.

“We saw a departure from casketed burials,” he said. “We’re seeing a huge decline in full body burials and a great increase in cremations. Economically, cremation is significantly less expensive than full burial.”

A major reason behind that besides the recession effect is that one of the more popular denominations like the Catholic Church began to allow cremation as an acceptable option.

If a family isn’t in the best financial standing, the mortuary will work with them to figure out the least expensive way.

For more information of the services Pahrump Family Mortuary has to offer contact them at 775-727-4099, or visit them 5441 Vicki Ann Road.