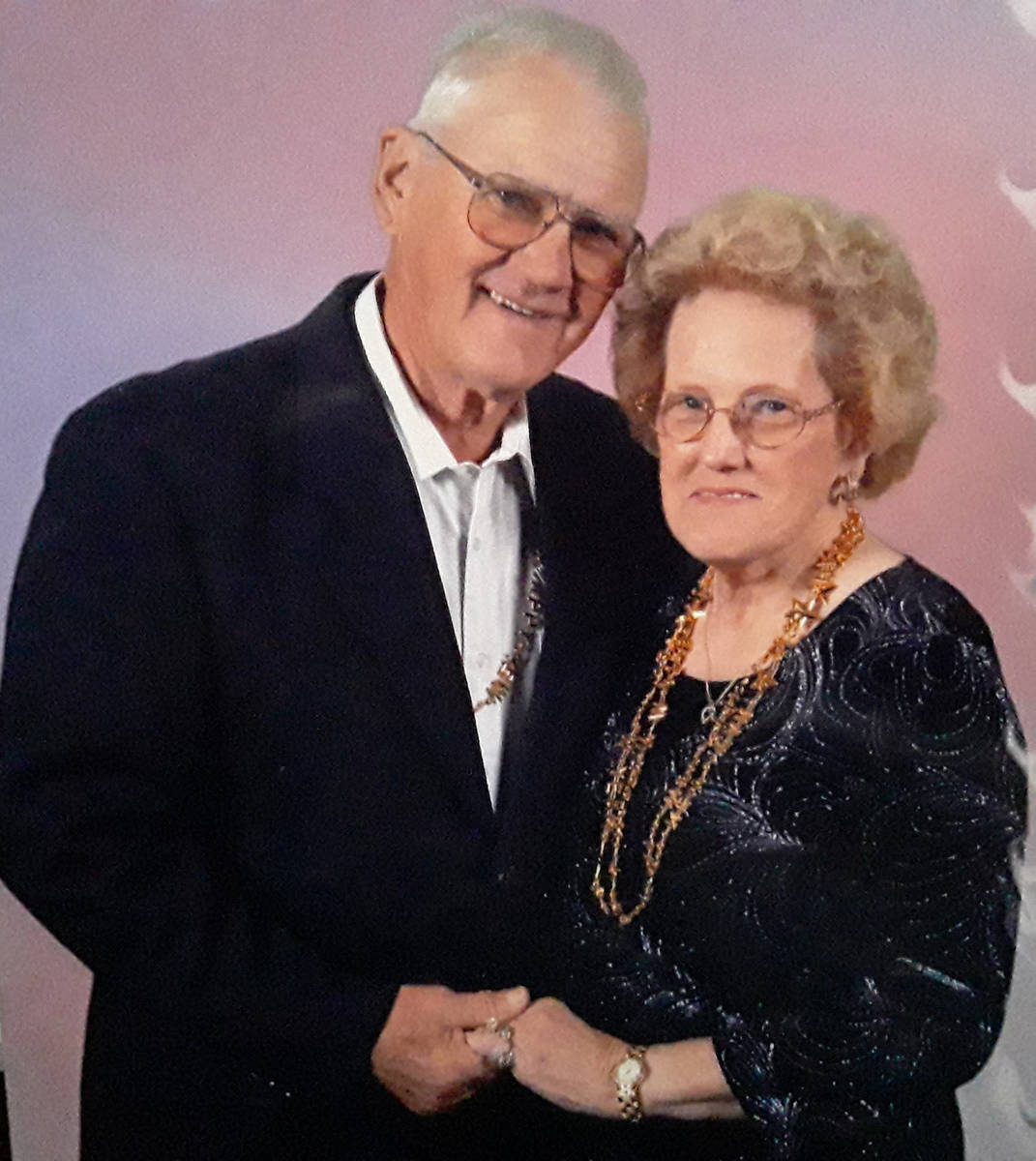 Special to the Pahrump Valley Times Pahrump Valley Mortuary owners Emil and Mildred Janssen share a tender moment together back n 2008. Mildred passed away on Nov. 27th, following a lengthy illness at the age of 85.

Janssen, who was born in Virginia, eventually made her way out West where she met her husband and eventual co-owner of the mortuary, Emil Janssen.

They purchased the mortuary in 1999, remodeled it and opened in 2001. Pahrump Family Mortuary is located 5441. S. Vicki Ann Road.

“Her first husband had died, and my first wife had just passed away in hospice in Henderson at the time. They asked me where I wanted her to go, and I told them Pahrump. At the time, Pahrump Family Mortuary was a fledgling business and Mildred came in just to answer the phones and that’s how she got involved with it. When we had the funeral for my first wife there, the building itself was substandard.”

Emil also recalled the event which led to their marriage.

“I invited her out to a meal and that’s how it all started,” Emil recalled. “We have been married for 22 years.”

After fixing up the property, Emil spoke about his wife’s request to create a special section in the cemetery, exclusively for children.

His late wife’s heart and generosity was another topic of discussion.

“She said we needed a ‘babyland,’ which is a burial place for babies, and small children only, so there’s a section set aside for babies and small children,” he said. “If some people lost their babies and they didn’t have any money for the services, Mildred would donate our services and a gravesite for people who could not afford it. She would do the arrangements, and I would take care of the cemetery plots, and the rest of the arrangements in the cemetery. The whole premise behind the cemetery was that we wanted to have a decent place for Pahrump residents to bury their loved ones, and her main objective was we had to have a babyland.”

As the name of the business suggests, Pahrump Family Mortuary is a family-run enterprise.

As such, Mildred’s daughter and Managing Director Starla Wolters provided her thoughts regarding the preparation of funeral arrangements for her own mother.

“I can get very emotionally involved with all of our clients, but most especially, and in my mom’s case, it’s very hard,” she said. “It’s extremely hard, but I’m going to make sure that it is done right and it’s going to be beautiful. I just want this community to know that my mom came from very humble beginnings in Virginia’s coal country. She lived in a home that we would call a shack that had dirt floors. From those very humble beginnings, my mom learned, and as she learned, she learned this business, and it was her heart for babies that brought her to this location. We are so incredibly proud of her, that from nothing, we have this.”

Mildred’s stepdaughter Carmen Murzyn also provided her thoughts on the passing of her stepmother.

“She was just a beautiful, warm woman and she had the most warm heart there was,” Murzyn said. “She did care a lot about babies out here and she would go out of her way just to make sure the families and babies were taken care of. She was just a generous woman and very caring and loving.”

Along with her love for babies and young children, Emil noted that his wife took special care of all families, regardless of their religious affiliation.

“She was a very thoughtful and caring person who never disrespected anybody, and never looked down her nose at anybody,” he said. “We have Orthodox people, we have people here who are from different countries and also different traditions. When she made arrangements, she would ask what their special needs were, how they wanted it done, and what kind of chapel service they would like to have.”

Emil also spoke about the events that led up to his wife’s death.

“About four years ago Mildred had a triple bypass and she recovered from that pretty well,” he said. “In June of this year, we went to eat at Saddle West and after we came out, she tripped on one of the concrete parking stops and hit her head very hard. She got bruised really bad and had to be patched up. She was bleeding and the doctor told her at the time that she might have problems. Slowly, it went on, and then she started to have dementia, mainly because of the fall, and she just started going downhill, little by little.”

Mildred Louise Janssen is survived by her children Robert, Deborah, Starla and William, as well as her stepdaughters Janet and Carmen.

Her surviving siblings include Carol, David, Lewis and Elmer.

She was preceded in death by her parents, her son Thomas, along with sisters Yvonne, Beatrice, and Lovetta.

A private funeral service was held Wednesday, Dec. 2, at the mortuary’s Grandview Cemetery, where a special plot was reserved for Mildred, just adjacent to babyland.