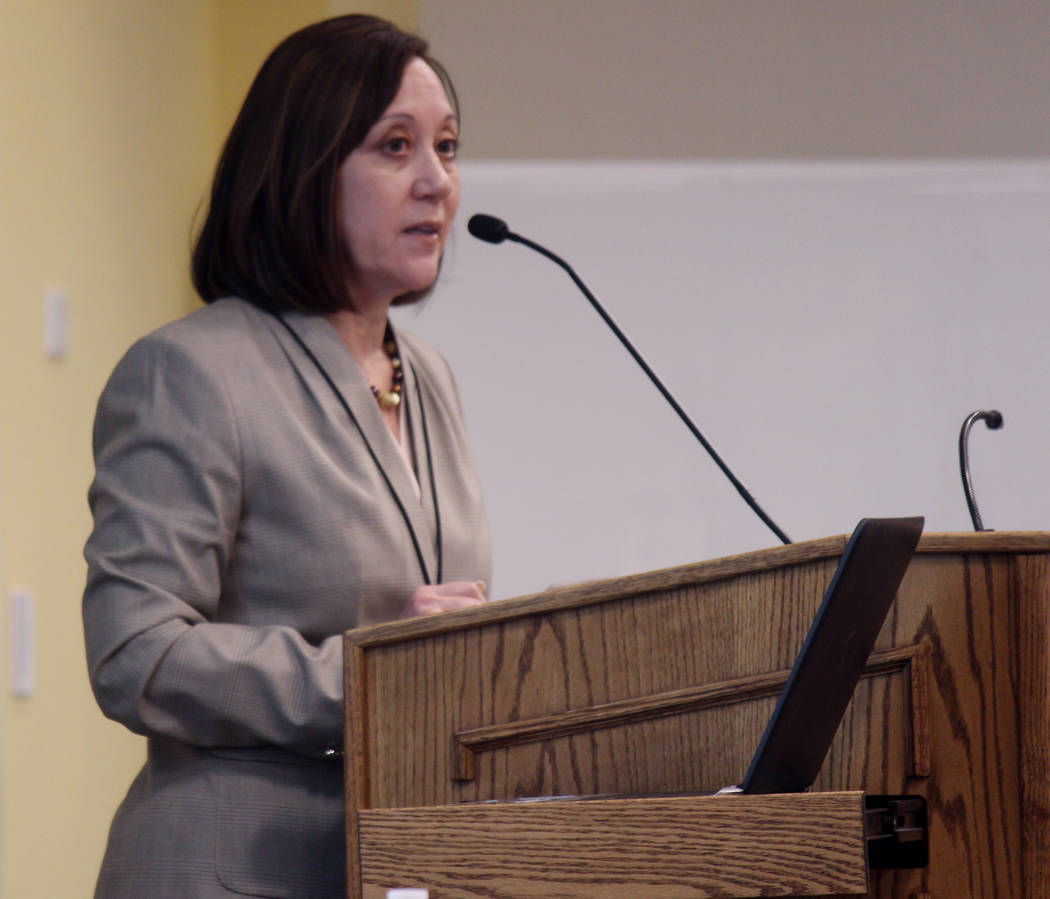 Jeffrey Meehan/Pahrump Valley Times Angela Evans, CEO of Valley Electric Association, speaks at an ambassador's meeting on Sept. 6, 2018 at Valley's conference center. Evans spoke about the co-op's support of the ballot initiative (Question 3) that would lead to, upon passage in the 2018 election cycle, a restructuring of the state's energy market. 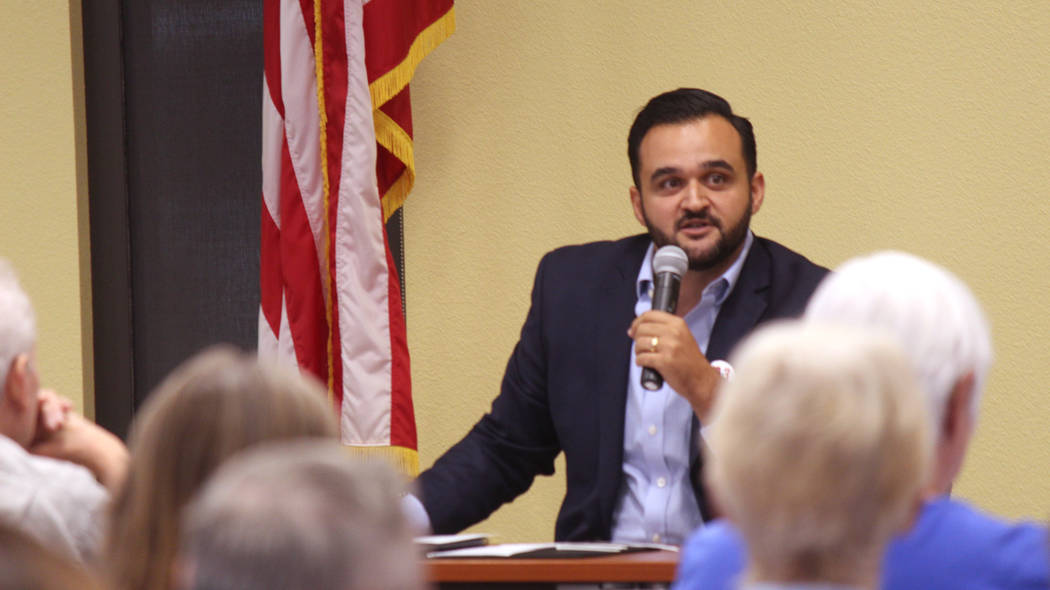 Jeffrey Meehan/Pahrump Valley Times Devlin Daneshforouz, outreach director for the Coalition to Defeat Question 3, speaks at Valley Electric Association's conference center at 800 E. Highway 372 on Sept. 6, 2018. Daneshforouz was one of three panelists that spoke on Question 3 during a forum on what the energy market would look like in Nevada if the ballot measure were to pass.

Note: This is Part 1 of 2 in the coverage of the energy choice forum.

A forum packed with information and arguments on a measure that would bring energy choice to Nevada occurred at the Valley Electric Association’s conference center. Valley Electric has long supported the passage of the measure.

Dozens filled the chairs at the conference center on Sept. 6 to listen to a panel of representatives, one being in favor of a yes vote on Question 3, with another panelist calling for a no vote.

A representative from Guinn Center, which is neutral on the topic, was also there to speak on different aspects of what it means to electricity customers of the co-op and across the state if what’s known as the Energy Choice Initiative (Question 3) were to successfully be passed in the November general election.

Angela Evans, CEO of Valley Electric, iterated the cooperative’s support for the initiative’s passage before the panel discussion, which lasted more than an hour, got underway at the co-op’s conference center at 800 E. Highway 372.

“Valley supports this initiative because it began with our members in 2016, who overwhelmingly voted for the initiative at that time,” Evans said. “We believe that our consumers want this choice and that it’s a choice for technology that also will be brought to the marketplace.”

Evans also stated that the initiative’s passage will provide consumers with the ability to choose what type of power their getting, who that power comes from and the price of that power.

The passage of Question 3 could open up opportunities for the co-op.

“Valley Electric doesn’t see that the energy choice initiative would take business away from the cooperative, but we see it as an opportunity for us to provide energy beyond our service territory,” Evans said during a question-and-answer session at the end of the forum.

The panelists were Devlin Daneshforouz, outreach director for the Coalition to Defeat Question 3; Dave Chase, executive director of the Nevadans for Affordable, Clean Energy; and Meredith Levine, director of economic policy for the Kenny Guinn Center for Policy Priorities.

Michael Hengel, executive vice president of communications and regulatory affairs for Valley Electric, was the moderator of the panel.

The forum was part of the third-quarter ambassador meeting for Valley. Questions presented were formed by Valley’s Ambassador Legislative Committee. Valley Electric is in support of the ballot initiative’s passage. The co-op sponsored the forum.

The panelists tried to answer the many questions that were posed, including those involving energy rates and those questions surrounding any supply issues, along with answering inquiries, such as whether there would be an increase in solar and other renewable energies in the state if the measure would go through.

Question 3 passed in the 2016 election cycle when 66 percent of Nye County voters helped push the measure through. At the state level, more than 72 percent voted in favor of the initiative. This is the second and final time the initiative has to get past the state’s voters, a requirement for constitutional amendments, which Question 3 calls for.

Levine, who represents the Guinn Center, which is neutral on the measure, explained what voters passed in the 2016 election cycle.

She stated what Question 3 is asking “is whether Nevadans should restructure the electricity market.”

If passed, an amendment will be made to Article 1 in the Nevada Constitution.

The passage will add “a new section requiring the Nevada Legislature to provide by law for an open, competitive retail electric energy market no later than July 1, 2023,” according to a financial impact statement for Question 3 on the secretary of state’s website.

The initiative also prohibits “the grant of monopolies and exclusive franchises for the generation of electricity” in the state, according to the document. NV Energy will no longer hold its monopoly in the state if the yes camp is successful.

Electricity customers will also get an option on what energy provider they want to use, according to Chase.

Millions have been raised on both sides of the energy choice initiative.

As of June, the Nevadans for Affordable, Clean Energy, a political action committee in support of Question 3’s passage, had collected over $19 million in contributions, including monies from Valley Electric Association and one of its subsidiaries.

As of June, over $12.3 million had been raised in support of the political action committee, the Coalition to Defeat Question 3.

Valley gave its support in dollars at the end of 2017. According to information on the Nevada secretary of state’s website, Valley Electric Association Inc. gave $50,000 to Nevadans for Affordable, Clean Energy Choices, a political action committee (PAC) in support of Question 3’s passage.

In December 2017, Valley Electric Transmission Association was noted on the Nevada secretary of state’s website as giving $50,000 to the Nevadans for Affordable, Clean Energy Choices.

Valley joins several organizations, including large groups such as Las Vegas Sands Corp. and Switch, which are in support of the effort of a yes vote.

The big contributor on the opposing side is NV Energy.

Several arguments and concerns were brought up during the forum as the discussion unfolded.

On the yes side of the argument, Chase pointed to an evolving electricity market as a reason the initiative needs to be passed.

“It made a lot of sense 50 to 60 years ago to have the monopoly model to make the long-term investments in things like coal plants and natural gas plants, things that were very difficult for a small group of folks to make that investment and give the energy we need,” Chase said.

But those times have changed in the past decade, he stated.

“The way we produce energy has changed dramatically and it just doesn’t make sense to maintain this same energy structure when you have the ability, this sort of dispersed energy grid, which frankly is more reliable, cheaper and it will provide us more clean energy,” Chase said.

For the no camp, one issue was that the initiative was to be delved out as a constitutional amendment. Daneshforouz, who was there for the no camp, also expressed concerns on the potential for electricity rates to rise, which was among one of several of his central concerns, if Question 3 were to pass.

During the forum, Levine answered to several arguments from both camps. She is the central author of a report focusing on Question 3: “Restructuring the Electricity Market in Nevada? Possibilities, Prospects and Pitfalls.”

Watch for upcoming coverage on this topic in Part 2 of this series on the energy choice forum.