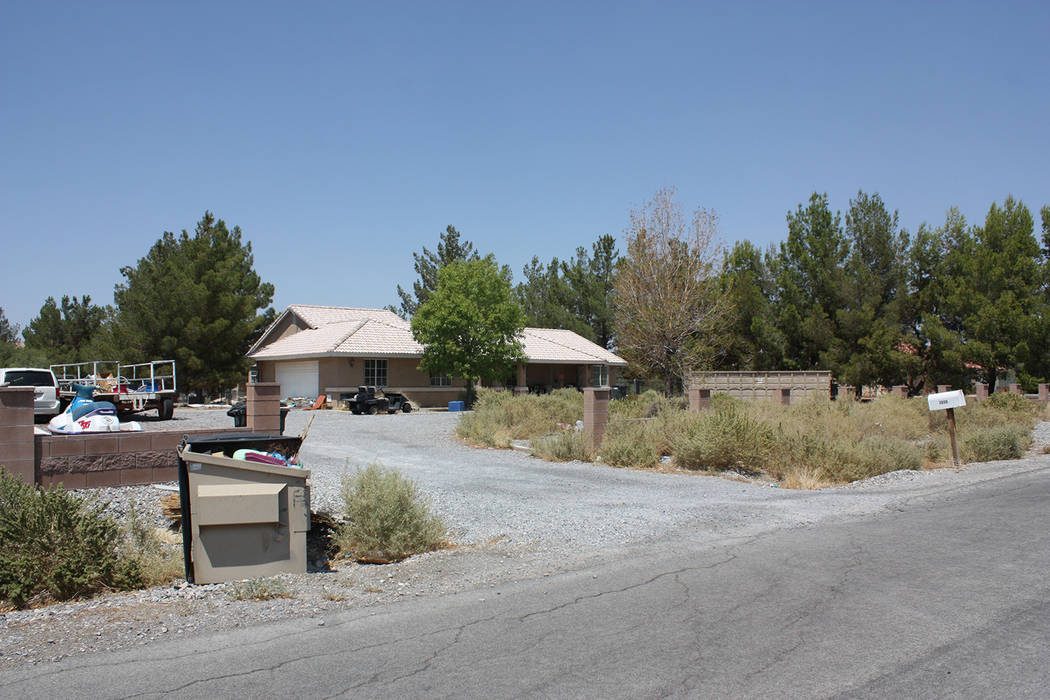 Robin Hebrock/Pahrump Valley Times A view of the home at 2650 River Plate Dr., which has been condemned by the county. 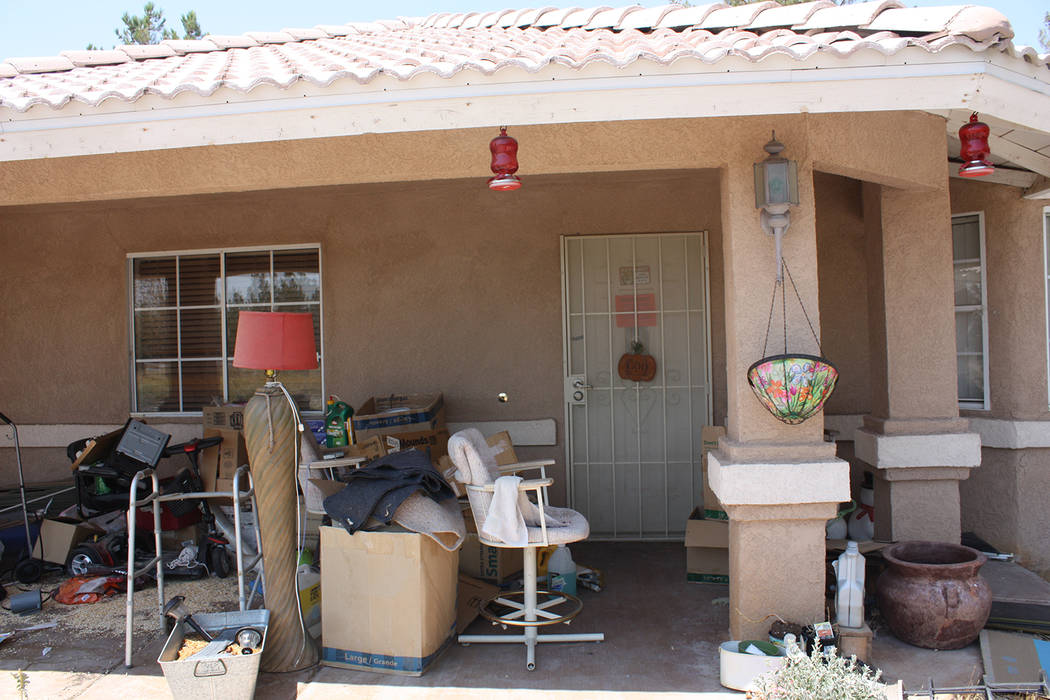 Robin Hebrock/Pahrump Valley Times This River Plate Drive home was declared a nuisance by the county, which cited unsafe and unhealthy conditions creating a hazard. Nye County is set to abate the nuisance within the next month. 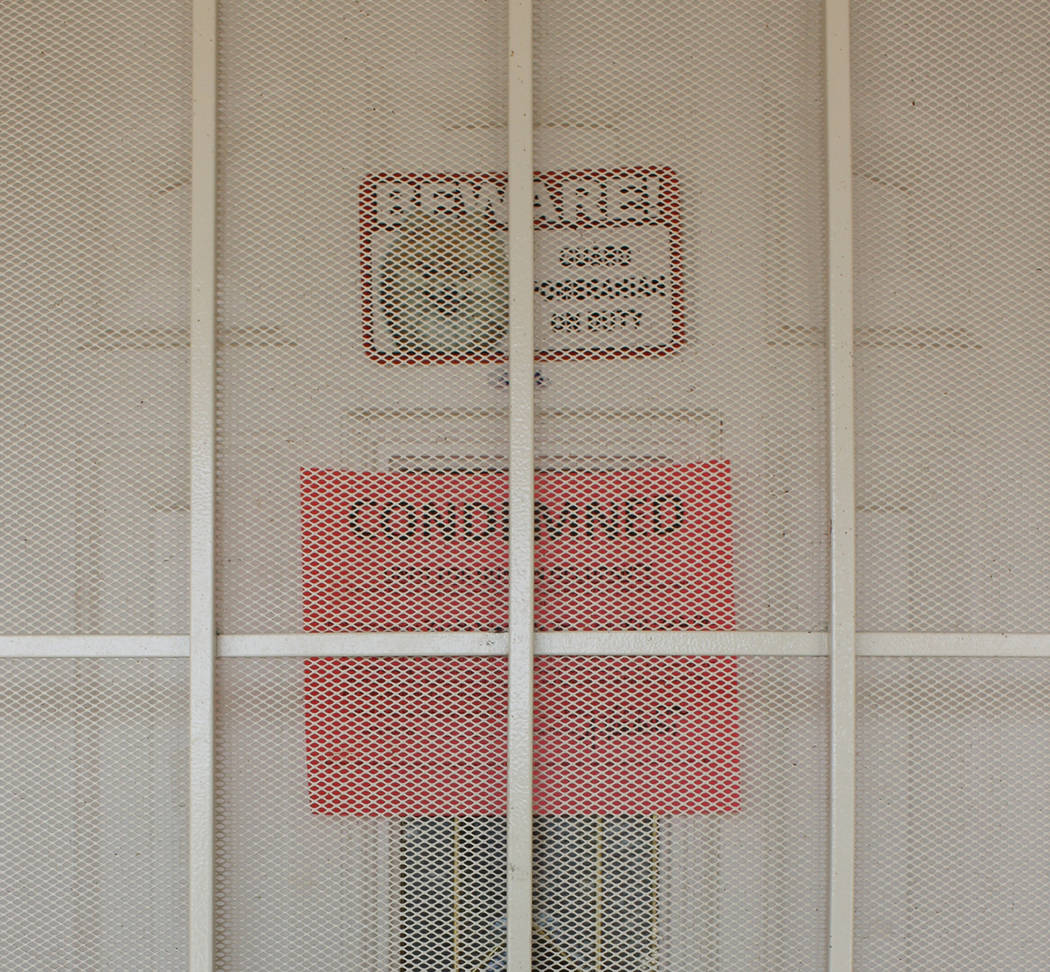 Robin Hebrock/Pahrump Valley Times A "condemned" sign was posted to this River Plate Drive residence in mid-July, giving the property owners notice that they were to vacate to residence within 24 hours and could not re-enter the home until the condemnation was lifted.

A Pahrump home on River Plate Drive has been condemned by Nye County Code Enforcement and was officially declared a public health and safety hazard. Due to the lack of action by the property owners, the county will now undertake the work necessary to eliminate the nuisance conditions with all expenses associated to be charged to the property owners.

The home in question is located at 2650 River Plate Drive and is owned by Harold Sandquist, with whom his daughter, Lynette, was residing. The residence has been the source of contention for three years, with neighbors feuding over the presence of the Sandquist’s many animals and the state in which they kept their property.

As tensions peaked, the Sandquist’s neighbors filed complaints against them and ultimately moved to have 26 homes in the neighborhood rezoned, an effort that eventually won through in mid-2017. The saga did not end there, however, with an arrest and the subsequent condemnation of the home taking place within the last two months.

According to information provided on the agenda item, a search warrant for the home was executed by the Nye County Sheriff’s Office on July 6 with the aim of determining whether elder abuse and unsanitary or unsafe living conditions existed. With evidence apparently before them, officers removed Lynette’s father and booked Lynette into the Nye County Detention Center on charges of elder abuse and those relating to animal abuse.

Following this incident, information regarding the situation was forwarded to the Nye County Code Compliance department, which initiated an investigation. On July 17, a “notice to abate an unhealthful condition” and a “notice of condemned property” were both sent to the Sandquists.

In the notice of condemnation, code enforcement officer Amanda VanHouten laid out the reasons for the action, asserting that the house was unfit for human habitation. She detailed the home being in a state of disrepair, causing a hazard to life, contamination of animal and human feces and urine and lack of operable sanitary facilities.

“You have seven days from receipt or 14 days from mailing of this letter to abate this condition,” the county’s notice to abate letter stated. Additionally, the notices detailed the August 7 public hearing at which the commission would make a final determination on the situation.

With the evidence before the commission, Nye County Commissioner Lorinda Wichman made a motion to find a nuisance and direct county staff to repair, abate or remove the nuisance within 30 days. The cost for the abatement would be assessed against Harold Sandquist, the property owner, via tax assessment roles, she specified. The Sandquists were then given the opportunity to speak.

“I feel this whole thing has been blown out of proportion,” Lynette told the commission during the public hearing. She said she was having trouble with her home insurance company following a plumbing problem in the home’s ceiling, which apparently caused the unhealthful and unsafe situation. For two years, she declared, she had been fighting to have repairs done but to no avail.

“With us being kicked out of my house and having the condemnation, it wasn’t right because I had water and I had electricity and my animals had water and food and everything else,” Lynette continued, remarking that she had been using water bottles to provide water to the bathrooms. “My house wasn’t as dirty as what they said it was… I am in the process of getting stuff done but I am waiting on the insurance and that to get things done. So it’s not my dad and I’s fault.”

Before the motion came to a vote, commissioner Donna Cox interjected to suggest the county give the Sandquists 60 days to attempt to remedy the situation themselves.

“I’ve seen this premises and I can understand why planning and zoning did what they did. But the structure itself is fine,” Cox said. She detailed that cleaning and plumbing repairs were necessary, describing the home’s flooring as atrocious. “The house at this point I feel is uninhabitable,” Cox admitted. “Nobody can live in it.”

Despite this, Cox said she felt the house was not a nuisance to the neighborhood but to those living in the home themselves. “I don’t have a problem with having to make sure this is followed through with,” Cox concluded. “I think 60 days would be more appropriate in this case, based on the fact that we have two handicapped people trying to do this themselves and we don’t have anything from the insurance company yet.”

Cox’s entreaty met with no concurrence during the meeting though and the commission voted 3-2 to declare the home a nuisance, with commissioners Wichman, Dan Schinhofen and John Koenig in favor and Cox and commissioner Butch Borasky against.