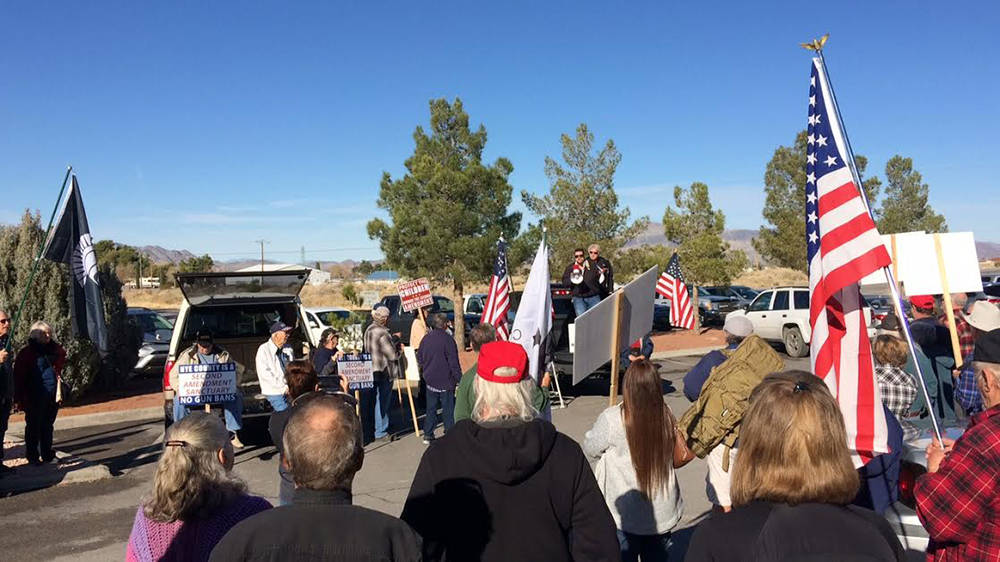 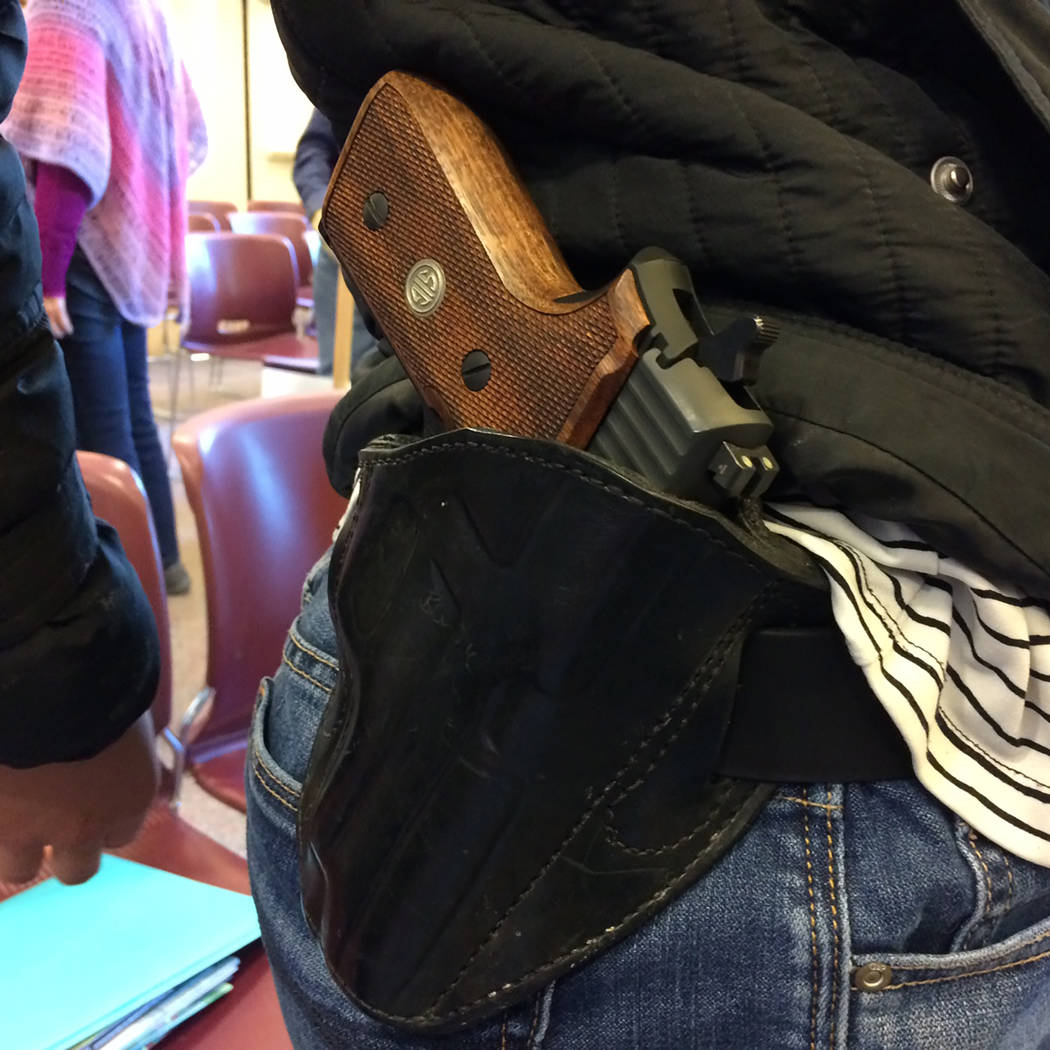 Robin Hebrock/Pahrump Valley Times Open-carry of a firearm was the subject of tense debate on Monday, Dec. 9 when the Pahrump Community Library Board of Trustees were set to address a proposal to ban guns in the story room. The agenda item was ultimately tabled. 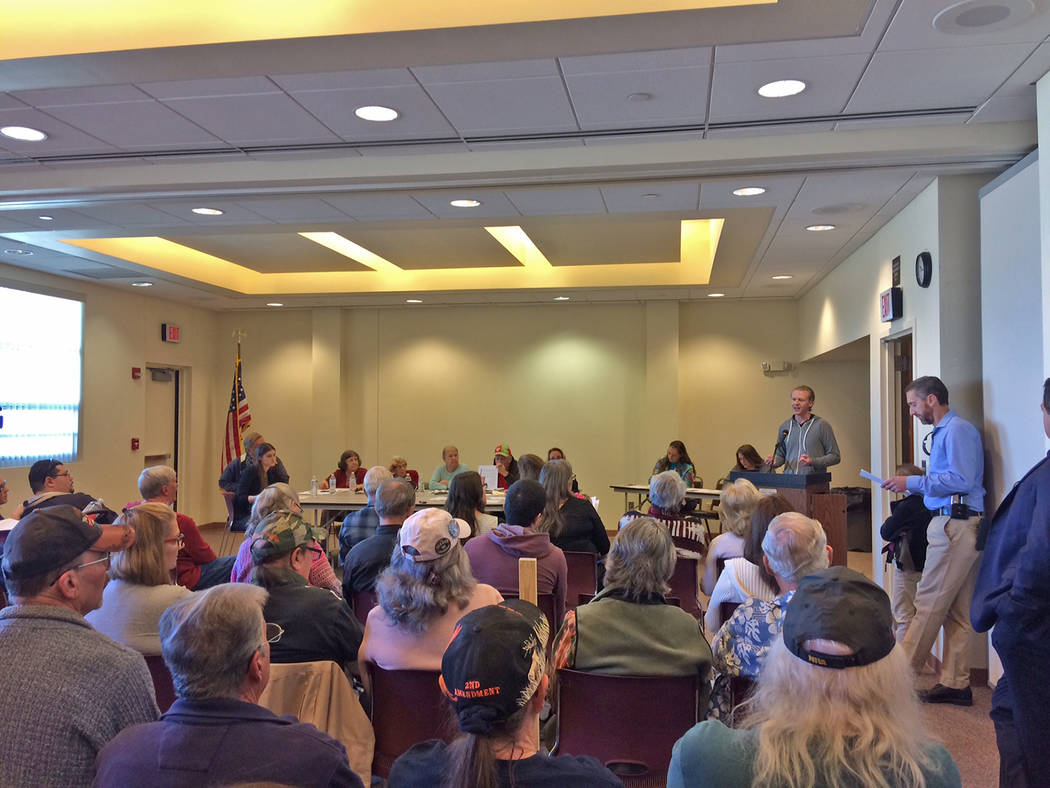 Robin Hebrock/Pahrump Valley Times The library board's meeting room was packed to capacity on Monday, Dec. 9. One young man is pictured expressing his opinion in favor of the idea to prohibit guns in the library's story room. 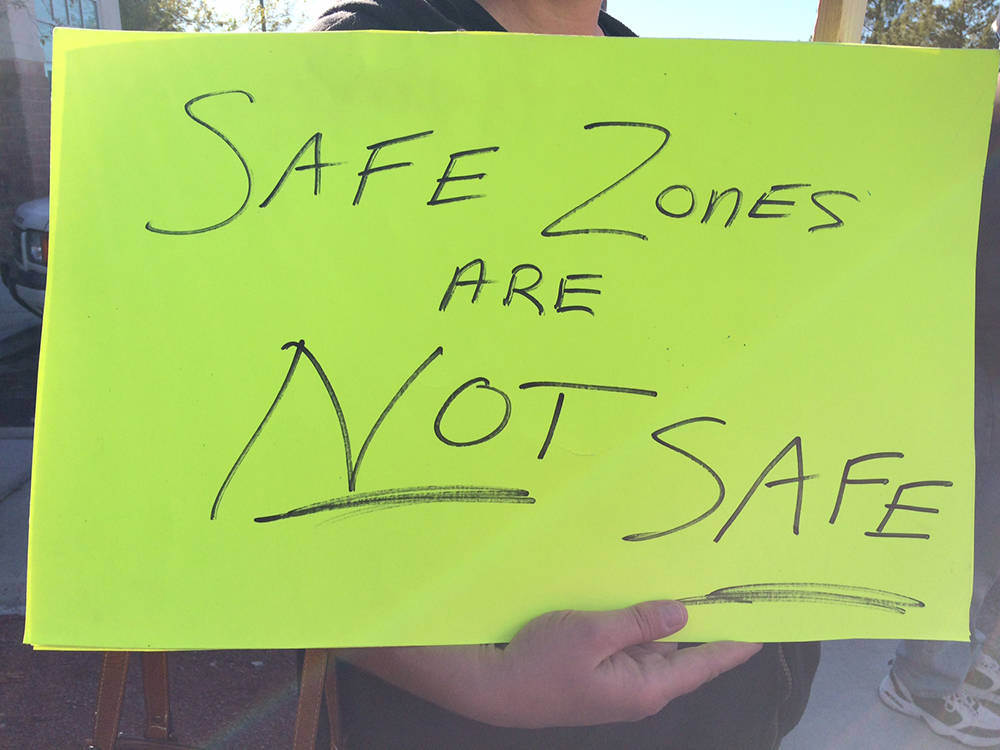 Robin Hebrock/Pahrump Valley Times One protester at the Second Amendment rally on Dec. 9 carried a sign bearing a belief that many who are against gun bans share.

The subject of a potential gun ban in the story room at the Pahrump Community Library has been tabled for the time being.

Library board members made the decision to pull the item from their Monday, Dec. 9 agenda after Nye County Commission Chairman John Koenig pointed out that discussing it could constitute a violation of Nevada’s Open Meeting Law, because the agenda item was not clear enough to allow the public to understand the precise nature of what would be up for consideration.

At the urging of the Nye County Republican Central Committee, around 100 area residents descended on the Pahrump Community Library the morning of the meeting to protest the proposal to ban guns in the story room, rallying in front of the public facility with picket signs and flags of all sorts hoisted into the air.

Nye County Republican Central Committee Chairman Joe Burdzinski was at the head of the rally, addressing the participants from the raised platform of a truck bed. With bullhorn in hand, Burdzinski implored the rally supporters to stand fast in their beliefs and refuse to bend whenever new restrictions on Second Amendment rights are proposed.

Also speaking to the crowd that morning were several well-known faces, including Nye County Commissioner Leo Blundo and Nye County Treasurer John Prudhont. Many other local officials were on site to protest as well, including Koenig and Commissioner Donna Cox.

However, the morning was not all one-sided, with several people attending the library board’s meeting to speak in favor of the action.

In fact, interest in the potential action was so high that Nye County Sheriff’s Office deputies had to conduct a headcount to ensure the meeting room, the largest in the library, was not overcapacity. With a maximum of 81 people allowed by fire code to occupy the space, some attendees were left to stand outside of the room and listen from the doorway.

A total of 30 speakers took their allotted public comment time to voice their position on the matter, many of whom were staunchly against the idea while some others spoke fervently in support of disallowing firearms in what is essentially a children’s area of the library.

Debate over gun control is certainly not new and plenty of the arguments put forth were the same as have been made repeatedly over recent years.

Those in favor asserted that no one was trying to take anyone else’s guns away, insisting the move was simply a common-sense action to help protect children.

Residents on the opposite side of the issue refuted those statements, declaring that a small step toward restricting constitutional rights would likely lead to a steady eroding of those rights, something they were fiercely disposed against.

Some said that given recent events in the nation, the sight of a gun on someone’s hip did not make them feel safe but others stated this very same sight actually gave them a sense of safety and comfort.

Certain residents argued that though many gun owners are responsible and would not cause a problem in the library, the chance that one person could attempt a violent act was enough to place them firmly on the side of the proposed gun ban.

Other residents proclaimed that gun-free zones pose a huge risk, as people intent on committing a crime would not heed a “no guns” sign and could even be more tempted to attack at a location where they know nobody will have a weapon with which to subdue them.

Several members of the Zimmerman family, one of whom was at the center of the controversy, attended the Dec. 9 meeting and spoke as well. Eighteen-year-old Savannah Zimmerman told the board and audience that the situation arose because she had been wearing a sidearm when she took her young sister to story time, which made a library official uncomfortable.

“As per state law, I am not legally allowed to concealed carry, I have to be 21 to do that so that is not an option for me,” Savannah stated. “For those thinking, ‘Well, then don’t carry,’… I am a single young lady and because of things like human trafficking, rape, kidnapping and assault, it is my responsibility to protect myself and those around me. My question… is, why now? Why is this a problem now? I have been carrying since March of this year and visit the library at least once a week… Why is this a problem now?”

After more than an hour of public comment, library board chairman Carlton McCaslin asked Koenig if he would be allowed to pull the item from the agenda, which Koenig confirmed.

“Then here under the ‘general rules of conduct policy,’… I’d like to pull that, it’s obviously ambiguous. And we really only have one more story time and after that we will be taking a three-month hiatus, so I would like to leave this ‘til later, if that is amenable,” McCaslin stated, with the board voting unanimously to take that action.