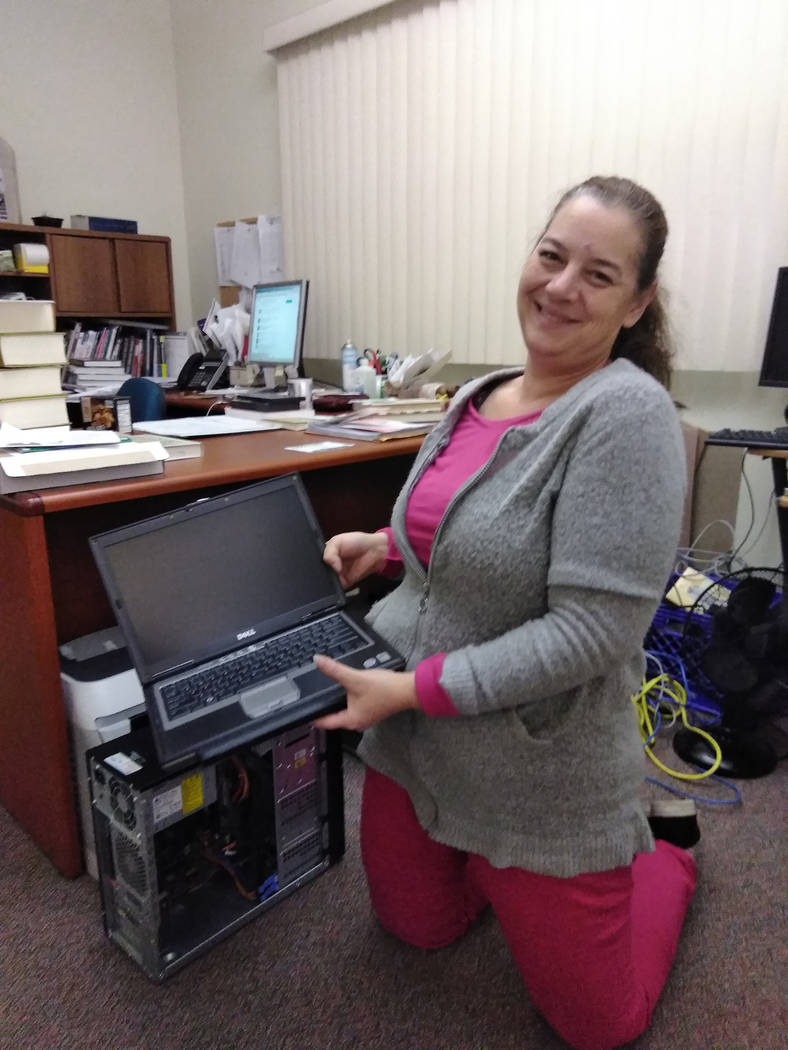 Selwyn Harris/Pahrump Valley Times Pahrump Community Library Reference Clerk Amy Bruno holds an old laptop computer destined to be recycled on Saturday Jan. 6. Officials from Nevada State Recycle are hosting the ‘E-Recycling event’ from 11 a.m. to 2 p.m. The library is located at 701 East St. Bruno urges anyone with old gadgets no longer in use to bring them to the event.

It would be safe to say that many Christmas gifts under the tree this year were of the electronic variety.

It would be safer to assert that the shiny new devices will most likely replace old, antiquated gear from year’s past.

As such, officials at the Pahrump Community Library are hosting an event where those older devices can be reprocessed, thus protecting the environment from the harmful elements and components contained in the gadgets, while lessening the impact to landfills throughout the Silver State.

On Saturday, the library will roll out its inaugural “E-Waste” recycling event from 11 a.m. to 2 p.m. at its 701 East St. location.

Reference Clerk Amy Bruno spoke about the importance of such an event, hosted by Nevada State Recycle.

“Sometimes these pieces of equipment get reused while other times they get broken down to extract particular parts and components within,” she explained. “The whole idea behind E-Recycling is that you take all of your electronics and peripheral equipment and simply turn them in for recycling.”

One important element of the recycling event speaks to the issue of privacy, as all devices store sensitive and private information such as Social Security numbers, bank statements and the like.

Bruno said those who do recycle their equipment need not worry about having their confidential information exposed and compromised.

“Nevada State Recycle takes these gadgets and completely erases all of the memory contained within,” she explained. “They perform that process a number of different times with the same device which is called a ‘total overwrite.’ This event is where those outdated pieces of equipment and gadgets belong. This is a government certified and licensed E-Recycle company. If your information is compromised or stolen, you know exactly who had it last.”

Retrieving valued components inside the electronic equipment is one of the main purposes of recycling older gadgets.

Bruno said most devices contain precious metals such as copper, silver, gold and even platinum.

She noted that attempting to mine those materials for personal gain, is akin to running a “fool’s errand.”

“In order to get 200 grams of gold, which is roughly what comprises a decent gold necklace, you would need roughly one ton of cell phones,” she said. “There are also very dangerous chemicals and elements in these electronic gadgets, including cadmium, and lead. Many of these electronic gadgets are completely reusable and recyclable, where they can get broken down and turned into new things.”

Additionally, Bruno made certain to mention items that will not be accepted at the recycling event.

“Those include paper products, cans and bottles,” she said. “Batteries, oil and hazardous materials or medical waste we do not accept,” she said. “I’ve already had several people ask me why we are not accepting recyclable paper. The truth is, there are recycling bins for those kinds of items located in several places around our town.”