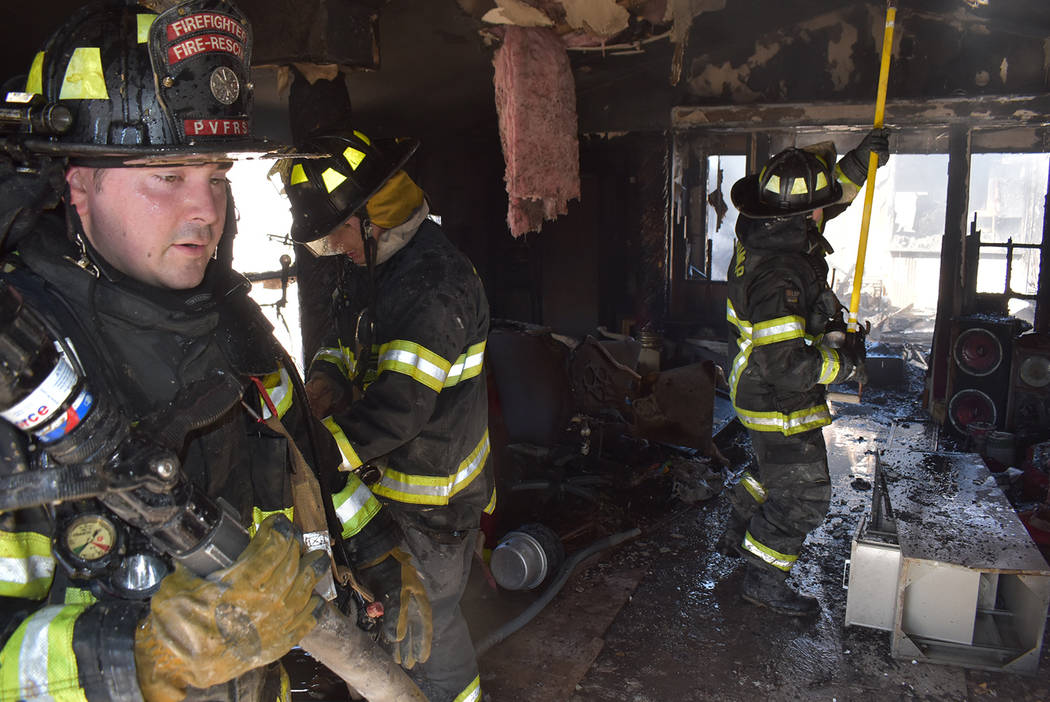 Special to the Pahrump Valley Times Pahrump Valley Fire and Rescue Services crews were dispatched to a structure fire along the 500 block of West Morgan Lane at approximately 10:51 a.m., on Monday Jan. 13. The sole occupant of the home was uninjured. 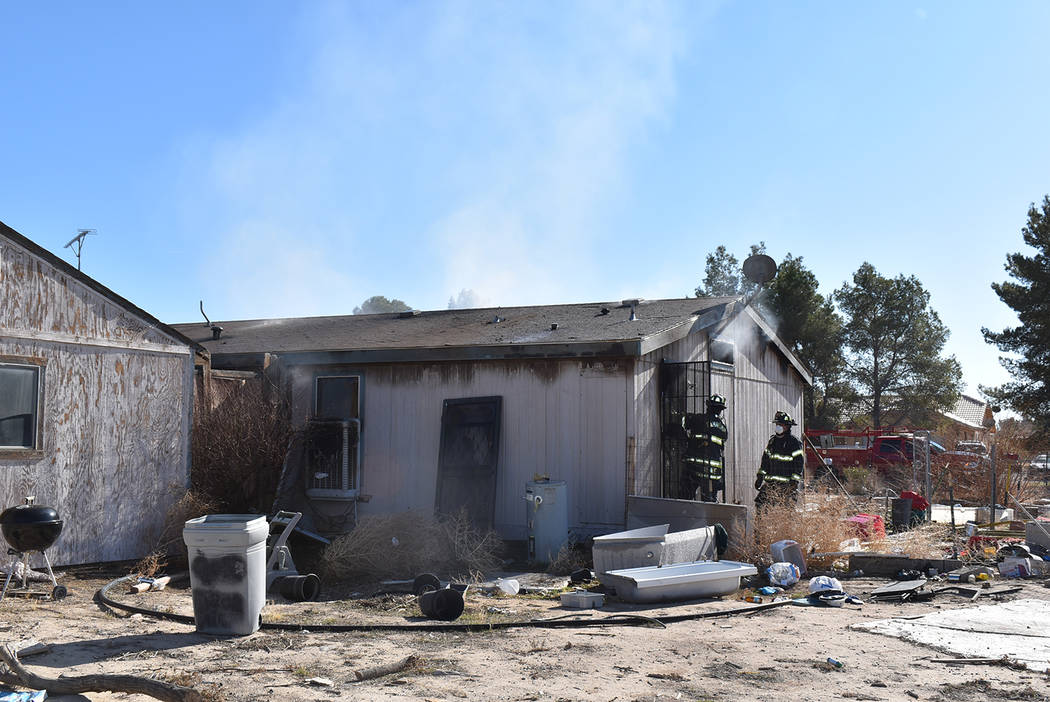 Special to the Pahrump Valley Times The stubborn Morgan Lane fire was controlled in under two hours after the dispatch. The cause of the fire is thought to be accidental in nature, related to the heating and ventilation system, according to Fire Chief Scott Lewis. 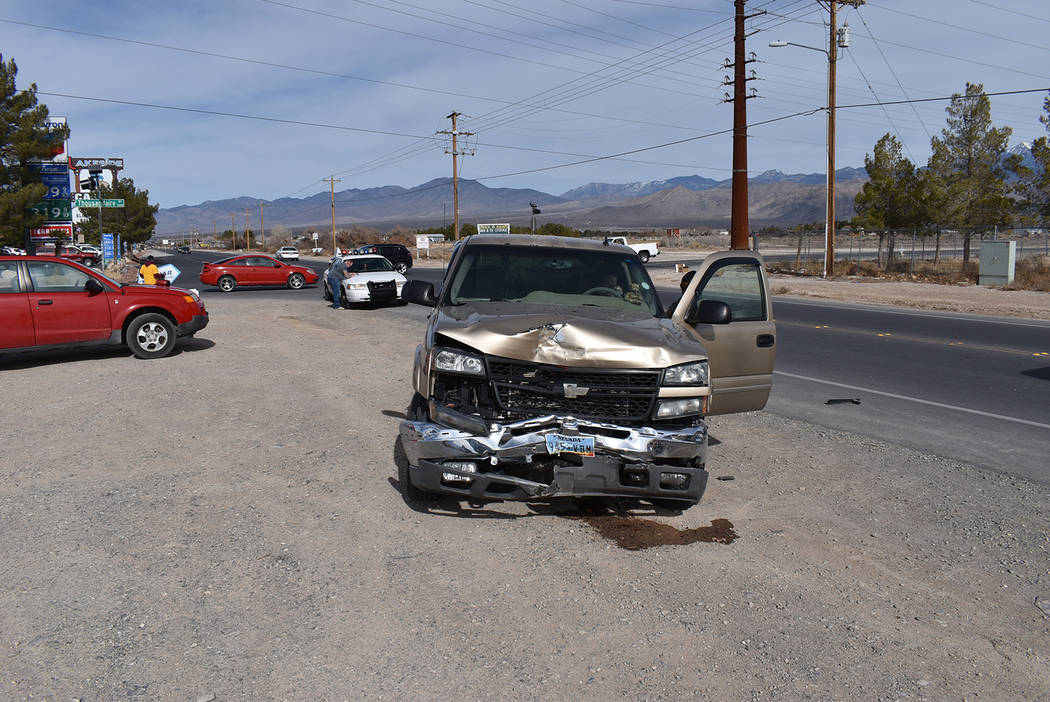 A Pahrump man is dead after his oxygen tank exploded while he was smoking a cigarette.

Pahrump Valley Fire and Rescue Services Chief Scott Lewis said the incident occurred on Wednesday, Jan. 22, at approximately 12:26 p.m., when crews were dispatched for a medical pendant alert along the 1000 block of South Jubilee Court.

“As crews were responding, we were notified that the victim had apparently ignited his oxygen, causing burns throughout multiple parts of his body, which then prompted the addition of an engine company,” he said. “Upon our arrival we found the incident as described. The victim sustained injuries throughout the upper parts of his body. That person met flight criteria, however, he declined to fly, and was transported to the local hospital and then subsequently there was an inter-facility transport to a Las Vegas-based hospital, where it’s our understanding he passed away from his injuries.”

“This was an off-road accident involving an off-road type vehicle that rolled multiple times,” Lewis said. “The rider was assessed and met trauma criteria. Mercy Air 21 was added to the assignment where a landing zone was established near East Mesquite Avenue. That patient was subsequently flown to Trauma.”

On Friday, Jan. 17, fire crews were dispatched to the area of Highway 160 and Betty Street for a two-vehicle collision and rescue assignment at approximately 6:11 p.m.

Lewis said crews arrived to find a T-bone type accident, with one person mechanically entrapped in their vehicle. That person was extricated without incident, and then declined medical transport.

On Thursday, Jan. 16, fire crews were dispatched to the 600 block of South Cynthia Street for a reported structure fire at 8:59 p.m.

“Crews arrived to find smoke showing from the interior of the dwelling,” Lewis said. “Their investigation revealed that improperly discarded materials from a fireplace were placed in a container not consistent with its application. The materials burned through the floor, causing fire damage. Crews quickly determined that there was no further extension, where they cooled the area down and released the scene.”

On Jan. 14, fire crews were dispatched approximately four miles east of the Death Valley Junction on Bell Vista Avenue for a single-vehicle rollover crash, with ejection just before 8 p.m.

“Upon arrival, crews found an SUV off the roadway with significant damage,” Lewis said. “There was no entrapment, however, there was one patient who had self-extricated. That patient met trauma criteria. Mercy Air 21 was added to the assignment where patient care was transferred to Mercy Air crews who flew the patient to Trauma.”

On Monday, Jan. 13, fire crews were dispatched to a structure fire along the 500 block of West Morgan Lane at approximately 10:51 a.m.

“As crews arrived on location, they found what appeared to be a manufactured dwelling with multiple additions and attachments along with multiple exposures,” Lewis noted. “There was smoke showing from the underside of the structure which quickly deteriorated and eventually went through the roof.”

Lewis went on to say that the sole occupant of the home was accounted for and was found to be uninjured, while a small pet dog was unaccounted for.

“Search teams went inside where one of the firefighters fell through the floor, but fortunately he was uninjured,” Lewis said. “The on duty captain changed his tactics from an interior objective to a defensive exterior objective and the fire was controlled in under two hours after the dispatch. It was a very stubborn fire and mostly contributed to the construction methodology. Because of that, the fire is thought to be accidental in nature, related to the heating and ventilation system.

Roughly 10 minutes later, fire crews were dispatched to a motor vehicle accident on West Highway 372 near Highway 178 in Inyo County as part of a mutual aid assignment for a one-vehicle rollover with ejection.

“Crews arrived to find the accident as described, where the patient sustained injuries consistent with trauma criteria,” Lewis said. “Mercy Air 21 was added to the assignment and that patient was subsequently flown to Trauma.”

On Sunday, Jan. 12, fire crews were summoned to the area of Bell Vista Avenue, just west of Blagg Road for a vehicle fire at approximately 12:20 p.m.

“Upon arrival, crews located a pickup truck and trailer with smoke showing from the firewall, separating the engine compartment from the passenger compartment,” Lewis said. “Crews quickly extinguished the fire with no extension and the vehicle was driven away by the owner.”