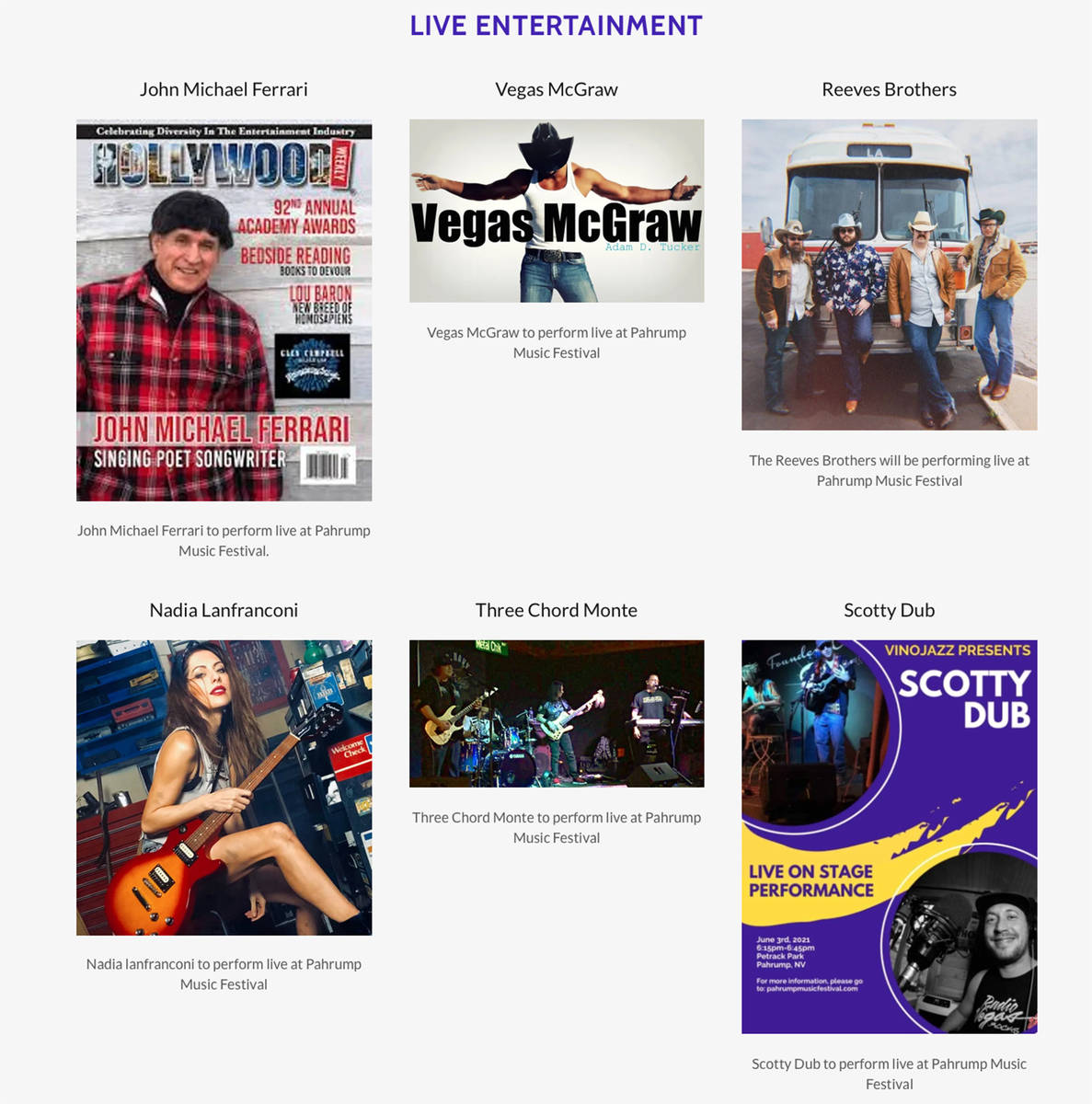 Screenshot This screenshot shows just a few of the notable musical entertainers that will take the stage during the Pahrump Music Festival, set for June 3 to June 6 at Petrack Park.

After many weeks of eager anticipation and building excitement, the Pahrump Music Festival is now right around the corner and the town is in store for a full four days of festive fun at Petrack Park.

Scheduled to kick off tomorrow, Thursday, June 3, the Pahrump Music Festival is set to include a huge array of entertainment and activities, with a little something for practically everybody to enjoy.

As detailed on the Pahrump Music Festival’s website, the stage will be a busy place from Thursday to Sunday, with the Pahrump Valley High School JROTC opening the event with the presentation of the colors at 3:30 p.m. on June 3. At 4 p.m. John Michael Ferrari, a Grammy-nominated artist, will hit the stage, followed by DJ Tiffani at 5 p.m. and Scotty Dub at 6:15 p.m. Rounding out the entertainers for Thursday will be Three Chord Monte at 7 p.m.

On Friday, June 4, the day’s entertainment will begin with the Pyro Surfers at 9 a.m., Valentin at 10 a.m. and Indy and the Jones at 11 a.m. There will then be a break from the musical performers, which will start back up at 2 p.m. with Suede Radio. Quing Illistry will take the stage at 2:45 p.m. and Ferrari will entertain once again at 4 p.m. followed by Rick Scanlan at 5 p.m. and the Reeves Brothers at 7 p.m.

There are several other performers mentioned on the Pahrump Music Festival’s website as well, although their performance times are not noted. These include Shelley Fisher, Gabe Huges, Kevin Prace, Lauren Davis and local youngster Avery Sampson, who will be singing the national anthem.

The Pahrump Music Festival may have entertainment at its heart, but the event is about a lot more than just tunes. Music is just one of the many forms that art can take and for VinoJazz founder Doug Dubin, highlighting the artistic talents of those in the local community is a key goal during the music festival. As such, there will be a plethora of art on display inside the Bob Ruud Community Center. Examples of the work of the valley’s creative minds can be seen in the Pahrump Elks Lodge #2796’s American Flag Art and Essay Contest, the winners of which will be announced on Sunday. Dubin also detailed that there will be art demonstrations taking place throughout the weekend as well.

In addition to all of this, there will be a talent contest in which contestants will be able to show off their skills, be they in the form of song, dance, comedy or any other display of creative pursuits. The talent show is set for Thursday, June 3 with the winners of first, second and third place to take home prizes. The cost to enter the talent contest is $25.

For the auto enthusiast, the art and beauty of chrome and rubber will be in the spotlight as well, with a car and truck show set for Saturday.

Those with a knack for tossing horseshoes can get in on a Nevada State Horseshoe Pitchers Association sanctioned horseshoe tournament.

The adrenaline-seeking set can get their blood pumping at the carnival that will be set up in the park, tickets for which are $35 for a day-pass.

Finally, there will be all sorts of vendors set up at the Pahrump Music Festival, offering attendees plenty of shopping opportunities and there will be no need to fear the setting in of hunger, as there will be several food trucks at the event too, selling delicious dishes for festival-goers to devour with delight.

The event is being put on by the VinoJazz Foundation, with major sponsorship from Pie Crust in honor of Silvermane.

Pie Crust, known by her real name Sharry Starbuck, was the life partner of the late Silvermane, whose real name was Glenn Ferry. The two had spent many years together in the Pahrump Gunfighters and Starbuck was delighted to be able to step up as a sponsor of the Pahrump Music Festival and utilize the opportunity as a method of honoring the memory of someone who truly loved Pahrump and the Old West lifestyle that the town offers.