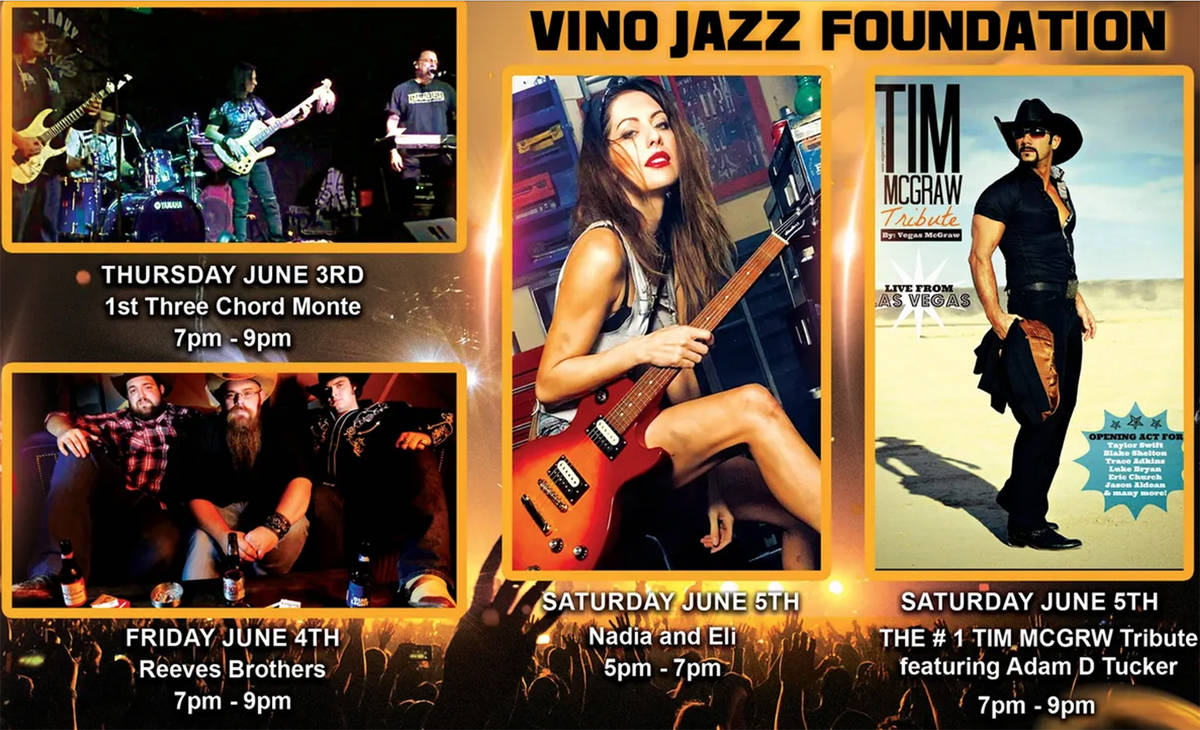 Special to the Pahrump Valley Times As detailed on a flyer for the event, there are several notable entertainers set to rock the stage during the Pahrump Music Festival. 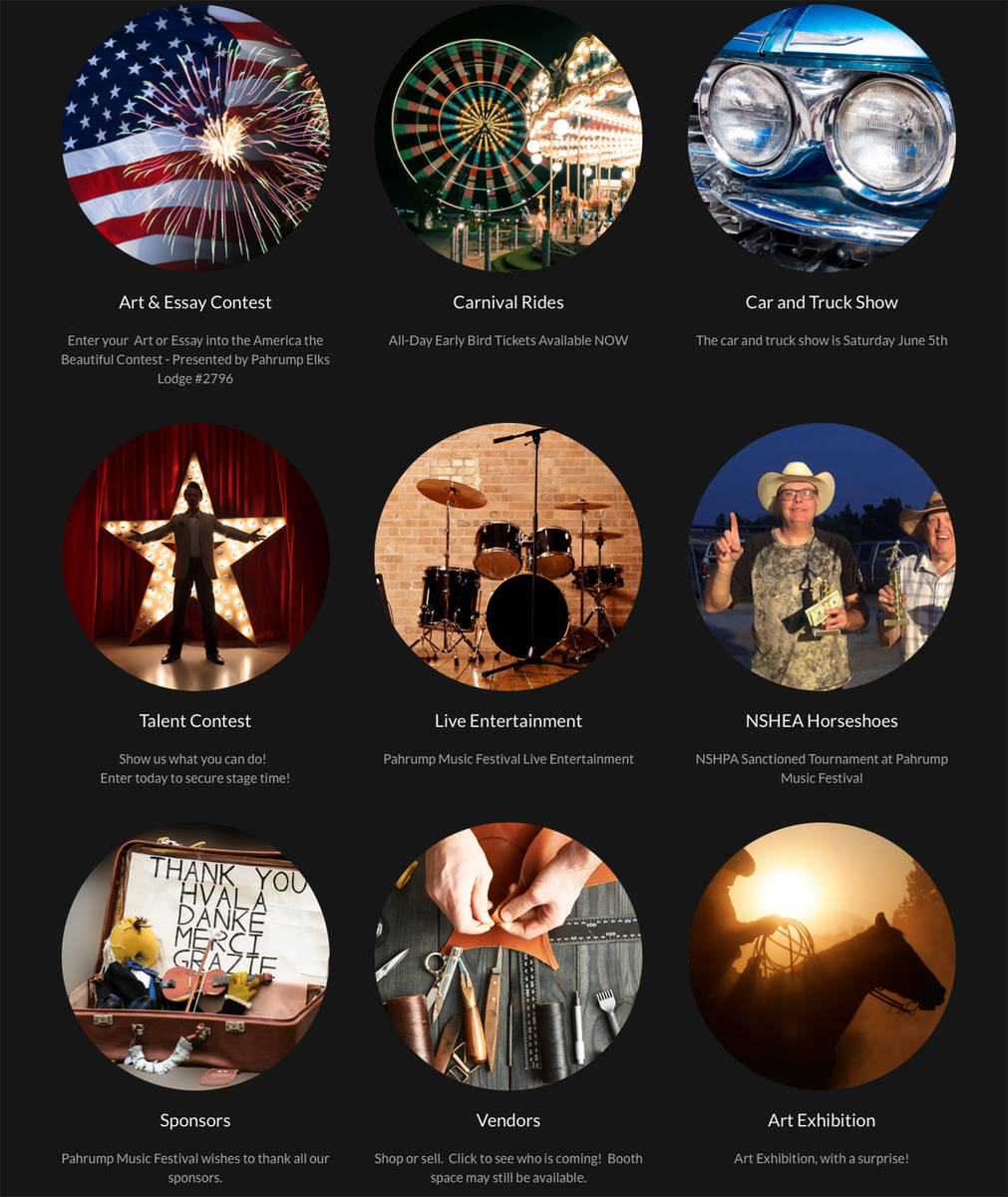 Screenshot This screenshot of the Pahrump Music Festival website gives readers an idea of the many activities and sources of entertainment that will be available at the event.

Set for Thursday, June 3 through Sunday, June 6, the Pahrump Music Festival is set to include a huge array of live entertainment, with a bevy of performers already scheduled to take to the stage throughout the event.

Those with a certain knack or flair can also show off their skills during the talent contest, and there will be an art exhibition displaying the works of many artists, both locals and out-of-towners.

There will be a car and truck show for auto enthusiasts to enjoy and for the kiddos and adrenaline junkies, there will be a carnival with all sorts of rides and games. The Nevada Horseshoe Pitchers Association has sanctioned a tournament to take place that weekend as well, and the local Elks Lodge #2796 is hosting an art and essay contest with the theme of “What does the American Flag mean to me?” which is open to all ages. Children who participate in the contest will also have the chance to win a bike.

As if all this is not enough, there will also be an auction, along with a variety of vendors on site, selling all sorts of merchandise, and a food truck court will be set up, giving attendees a whole host of choices in terms of the goodies they get to devour during the festival.

General admission to the event is free and attendees will be able to take pleasure in all of the entertainment and art at no cost. However, for those who want to hop on a few of those pulse-pounding carnival rides or take part in the talent show, there is a cost associated. Early-bird carnival tickets are on sale now at $25 for a one-day pass but that price will go up to $35 once the event is underway. For the talent contest, the entry fee is $25.

The Pahrump Music Festival is the brainchild of Doug Dubin, co-founder of the VinoJazz Foundation, and the event is is being presented with sponsorship by Pie Crust, in honor of Silvermane. For those who may be asking themselves, “Who are Pie Crust and Silvermane?”, the answer lies in one of the Pahrump Valley’s most beloved local groups, the Pahrump Gunfighters.

Dubin explained that Pie Crust, whose real name is Sharry Starbuck, and Silvermane, the late Glenn Ferry, were life partners and members of the Pahrump Gunfighters. Silvermane has since passed away and when Pie Crust, a member of the event committee putting the Pahrump Music Festival together, saw the opportunity to do something special in honor of Silvermane’s memory, she stepped up to become the presenting sponsor.

“Glenn was a successful businessman and the two of them loved the Old West lifestyle,” Dubin detailed.

As the event date draws ever closer, Dubin said the excitement is ramping up and everyone is looking forward to what is anticipated to be a wonderfully successful inaugural event.

“This event is getting lots of attention from all around Southern Nevada, Arizona, Utah and California. People are saying this is going to be the biggest and best event this year,” Dubin raved.

While there are already plenty of vendors and acts ready to take to the stage, Dubin said the chance to participate has not yet passed and event organizers are still accepting applications for vendors and sponsors, and inviting additional talent to show off their stuff, be it in the form of music, art, comedy, dance or other demonstrations of creativity and artistry.

To access vendor booth applications and sponsorship forms, as well as a list of those who have already signed up as vendors and sponsors, visit www.PahrumpMusicFestival.com

Additional information on how to sign up for the talent contest or as a performer, to purchase early-bird carnival tickets and more can also be found at the aforementioned website.

The Pahrump Music Festival Committee will also be meeting on Thursdays each week in the run up to the event. The group meets at the Pahrump Valley Museum, 401 E. Basin Avenue at 10 a.m.