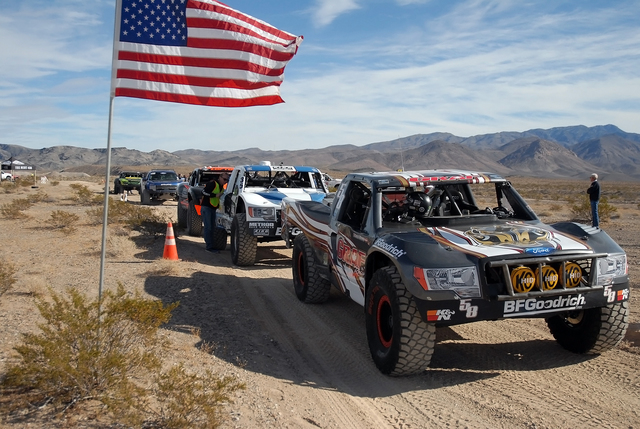 Trick trucks line up at the time trials on Thursday for the Pahrump Nugget 250. There will be nearly 150 racers for Saturday’s race, which starts in Johnnie at 8 a.m. There will be a 16-mile parade to the start line from the Nugget parking lot starting at 7:15 a.m. The race will end at the Pahrump Nugget parking lot. Horace Langford Jr./Pahrump Valley Times

The Pahrump Nugget 250 off-road race is returning to the area this weekend after a nine-year hiatus and with it a large economic impact.

Town of Pahrump Tourism Director Arlette Ledbetter said that the 250-mile race, which features 150 racers, will generate millions of dollars for the race area, with the majority of that going to the town.

“This event is so welcome here, I don’t even have the words,” Ledbetter said. “Its economic impact for this event is around $15 million.”

With the racers, crew, family and spectators coming to town, the 418 hotel rooms in Pahrump are sold out.

The sellout is a welcome surprise for Holiday Inn Express General Manager Jenny Bahler, who said she found out about the race less than a few months ago.

“We are, we might have three rooms left,” Bahler said.

With the high occupancy rate expected, Bahler said that they raised the room rate accordingly.

“For us, whenever we have increased demand, we have the ability to increase the rate,” she said. “It’s been really good financially for the hotel to have them come and it’s been a really good experience so far for us.”

Ledbetter said that selling out all the hotel rooms in town is fairly rare, with events like the Balloon Fest, Fall Festival and the Grape Stomp among those few occasions.

Having something of this magnitude, in a time that’s usually a slow period is big, according to Ledbetter.

“It’s just so incredibly great to have an event like this in December,” she said. “The fact that it returned to Pahrump makes it even more fantastic.”

In an attempt to draw as many people here as possible for the race, the town promoted the event over the hump, in high-traffic-volume areas.

“We did take it to digital billboards in Las Vegas, which garner about 15 million impressions per month,” she said. “We have had them up for the last two weeks and will run them through the end of the race on Sunday.”

Golden Casino Group’s General Manager Jeremy Jenson said that they were approached about returning the race to Pahrump, and that the decision was a no-brainer.

“They reached out to us a year-and-a-half ago, and they wanted to bring the race back to the area and it was something we knew was previously in town,” Jenson said. “It’s something that we came to an agreement on, to sponsor the race.

“It’s something that we’re definitely excited about.”

Jenson said that a three-year agreement is in place which will keep the race in town until 2019. After that Jenson hopes to work an agreement out to keep it here even further.

“So we’ll see how it goes and hopefully we can bring it back for another 10 years,” he said.

“It should be a home run.” he said. “Again, everything is sold out, and with the number of $10 to $15 million, it’s going to be pretty significant.”

After it’s all over, the monetary benefit created for the town will be like getting a holiday gift for Pahrump, according to Ledbetter.