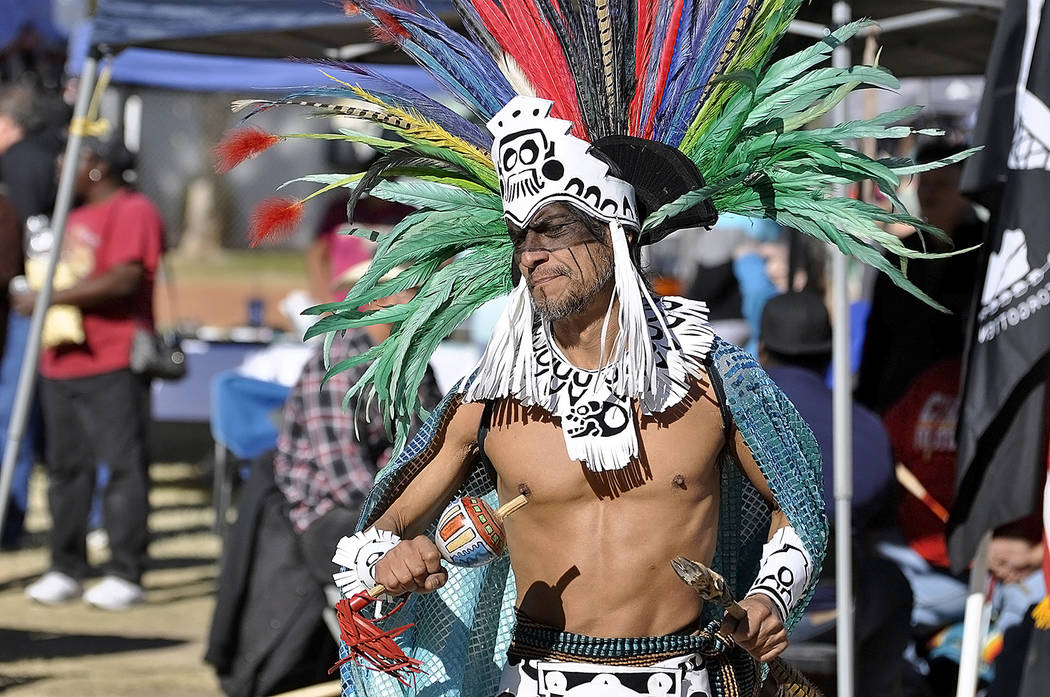 Horace Langford Jr./Pahrump Valley Times An Aztec dancer performs an ancient ritual dance during the Inter-tribal dance portion of the 2017 Pahrump Social Powwow on Saturday. Gourd dancers along with Northern and Southern Drum performers also took part in the popular, annual event over the past weekend. 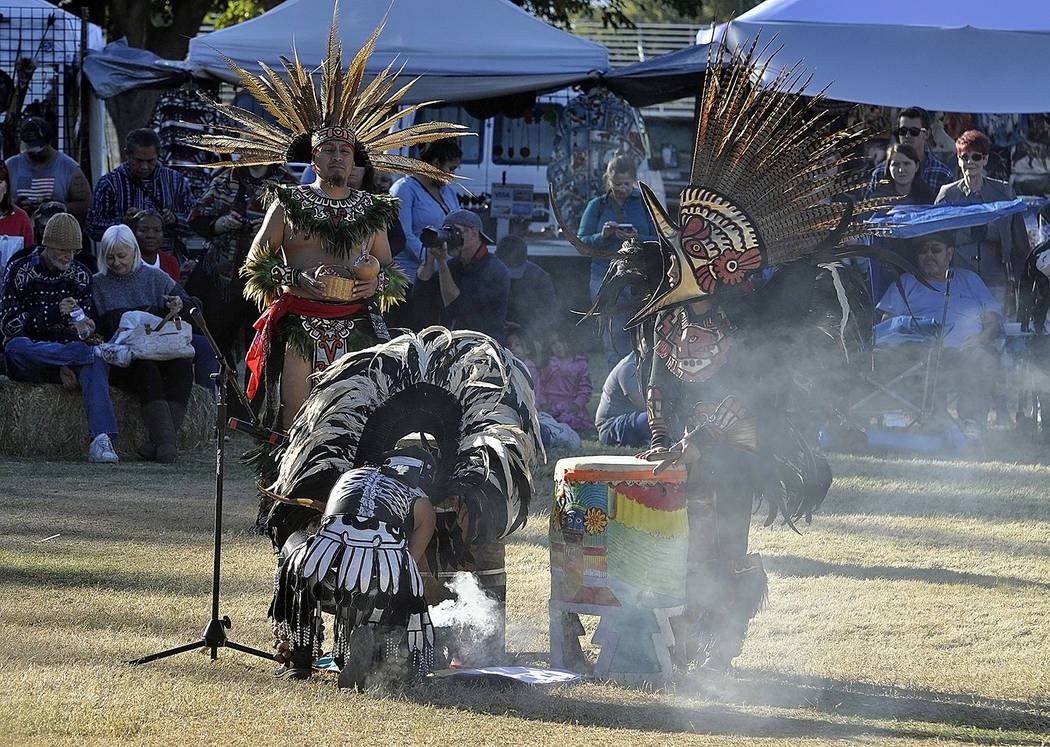 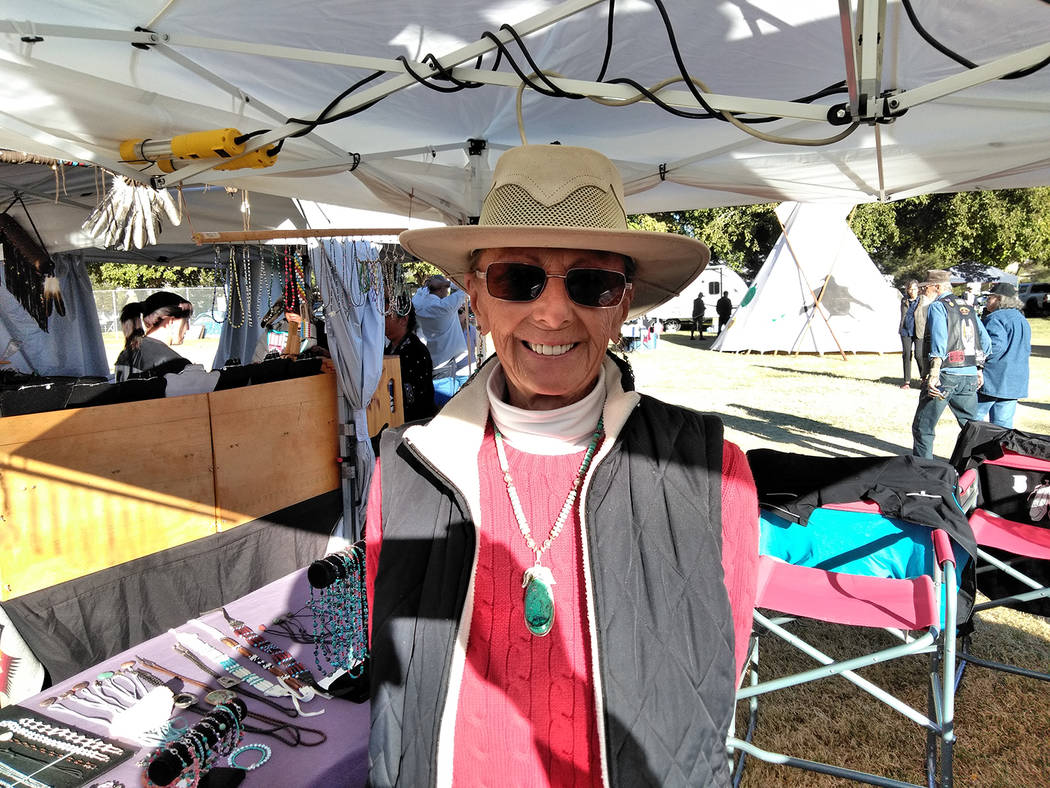 Selwyn Harris/Pahrump Valley Times Anna Redeye, owner of Redeye Enterprises, was one of more than a dozen vendors who setup shop during the annual Social Powwow at Petrack Park. Redeye specializes in Native American Jewelry. Redeye and her husband Marvin arrived in Pahrump from Camp Verde, Arizona. 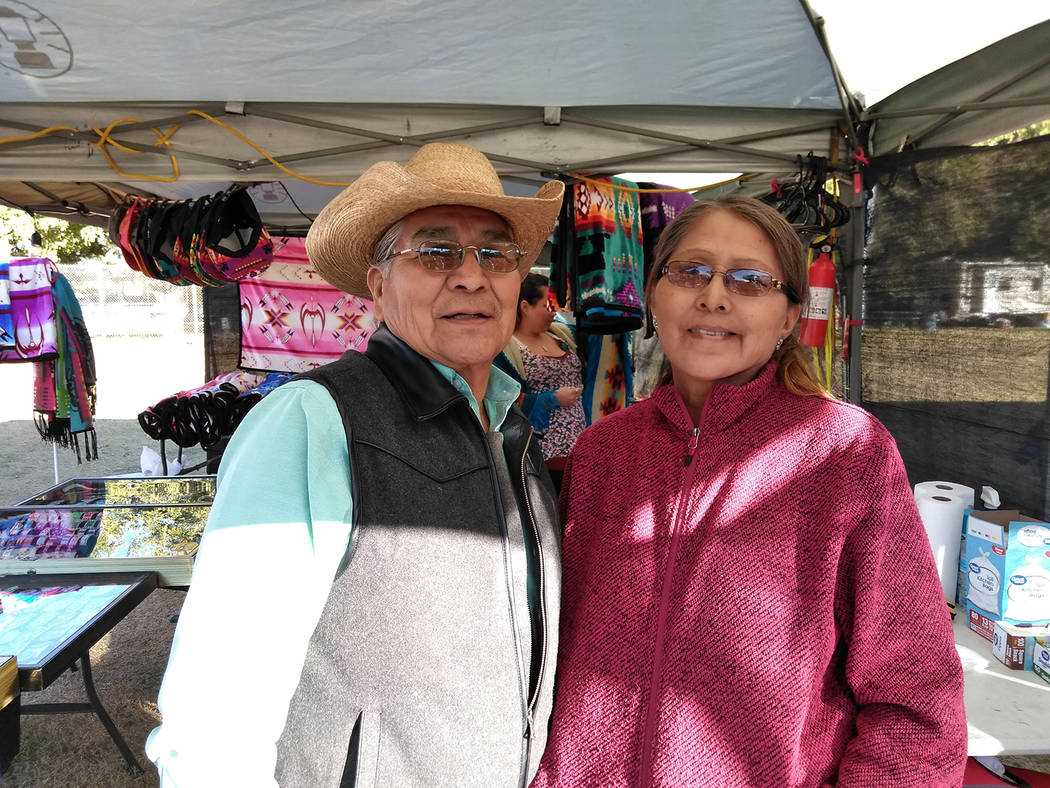 Selwyn Harris/Pahrump Valley Times Julius Claw and wife Darlene, are the owners of Claws Indian Jewelry, located in Cajon Mesa, Utah.where they sell Native American jewelry precious stones and beadwork. Claw is a U.S. Marine Corps Veteran, who served in Vietnam from 1970-to-1979.

Founded in 2003, the mission statement from officials associated with the Pahrump Inter-Tribal Social Powwow centers on “Creating a cultural and educational experience for all people through indigenous music, dance, crafts and storytelling.”

Each year, the annual event is hosted the weekend before Thanksgiving Day at Petrack Park.

This year was no different, as hundreds of local and out-of-state residents descended upon Petrack Park from Friday, Nov. 17 through Sunday afternoon, Nov. 19.

Those who attended the Powwow got an up-close visual of the vibrant colors, which adorned elaborate Native American regalia and received what amounted to a tutorial on the age-old traditions and culture of Native Americans.

Director Paula Elefante said the event normally attracts between 500 and 750 visitors each day.

The original definition of the word powwow or “pau wau” means a gathering of people coming together to trade.

The modern-day powwow evolved from what’s known as the “Grass Dance” societies, which formed in the early 19th century.

The dances, according to Elefante, were an opportunity for the warriors to re-enact their brave deeds for all the members of the tribe to witness.

Incidentally, the town of Pahrump is home to Western Shoshone and Paiute tribes.

Both the Saturday and Sunday portions of the powwow begin with what’s known as the “Grand Entry” at noon.

“The dancers line up and ahead of them will be the colors or flags,” she said. “All the while, the drums are singing and the tribes all come in and post the colors. Different tribes, clothed in their traditional regalia, shared their traditions and heritage through the art of dance. Each dance tells the story for that tribe. The powwow draws many local residents, as well as people from other areas, to learn of Native American heritages and traditions expressed through stories and dance.”

Julius Claw and wife Darlene, for the past 25 years, are the owners of Claw’s Indian Jewelry, where they sell Native American sterling silver jewelry, including turquoise, white shell, black onyx and other precious stones, beadwork and blankets.

Both arrived from Cajon Mesa, Utah, located in the Four Corners area of the Beehive State.

“We have been coming to Pahrump almost every year for the past five or six years,” Julius Claw said during a brief lull on Saturday afternoon. “This year’s powwow has been really good. There has been a lot of people who came out on Saturday. It is indeed worth making the trip to Pahrump, because we have made a lot of friends in the area here and we like to come back and visit with them, especially the veterans here in the community. Every evening I visit with my fellow comrades.”

A mere few steps away from the Claws’ booth was that of Anna Redeye, of Redeye Enterprises, also specializing in Native American Jewelry, including sterling silver string necklaces, and a variety of various stones and rings, as well as jewelry which was designed from the Vietnam War era.

Redeye and her husband Marvin arrived from Camp Verde, Arizona, which is right smack-dab in the middle of the state.

The couple has been in business for the past eight years.

“We have been coming to the Pahrump Social Powwow for the last five to seven years. We keep returning because we really like the people here,” Redeye said. “This is our second day of sales and so far things have been going just fantastic. The weather is wonderful, the people have been great and we are really having a good time here.”

Elefante, meanwhile, noted that each year, attendees are expected to abide by particular protocols during the three-day, family-friendly event, where alcohol is strictly forbidden during the powwow.

“Visitors should be respectful of the Native American traditions,” she said. “Attendees should not walk across the sacred dance circle because it has been blessed according to tradition. People also should not take photos of the dancers without their permission, and if a dancer loses a piece of their costume on the ground, you are advised not touch it. The powwow is a great cultural celebration, and should remain that way.”