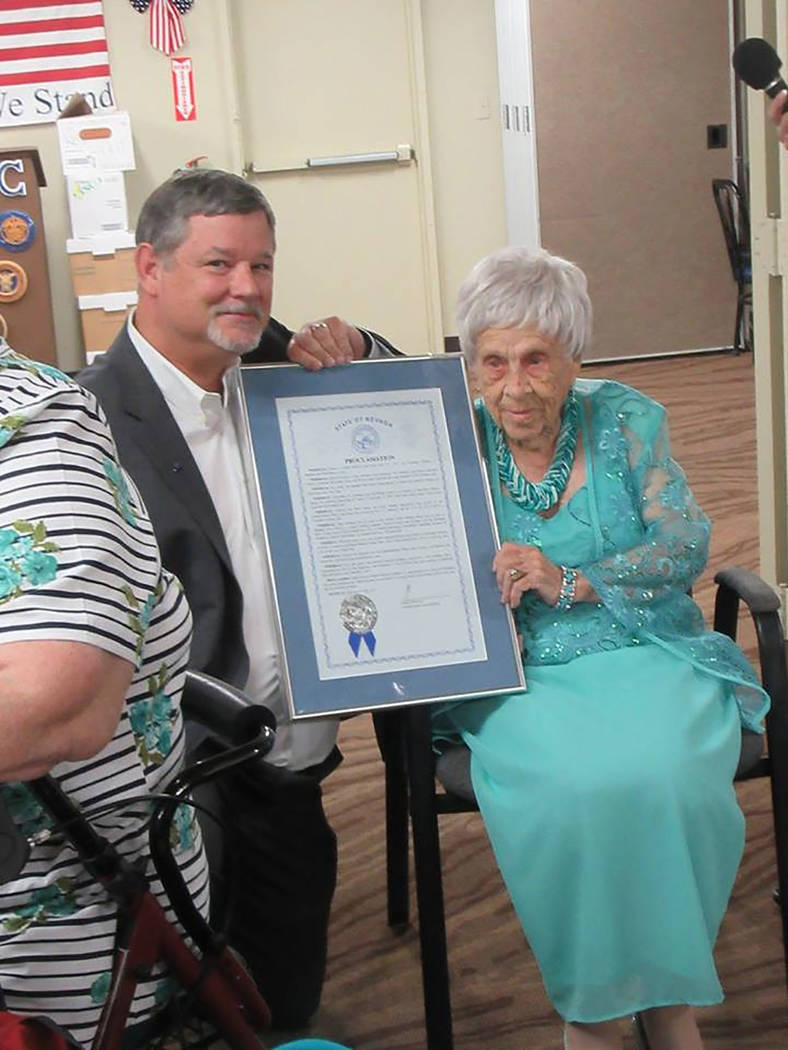 Special to the Pahrump Valley Times Nevada District 36 Assemblyman James Oscarson James Oscarson presents a proclamation to Geneva Dulaney during a 100th birthday celebration on July 24. Dulany was born July 23 1917, in Carthage, Illinois. She moved to Pahrump in 2016. 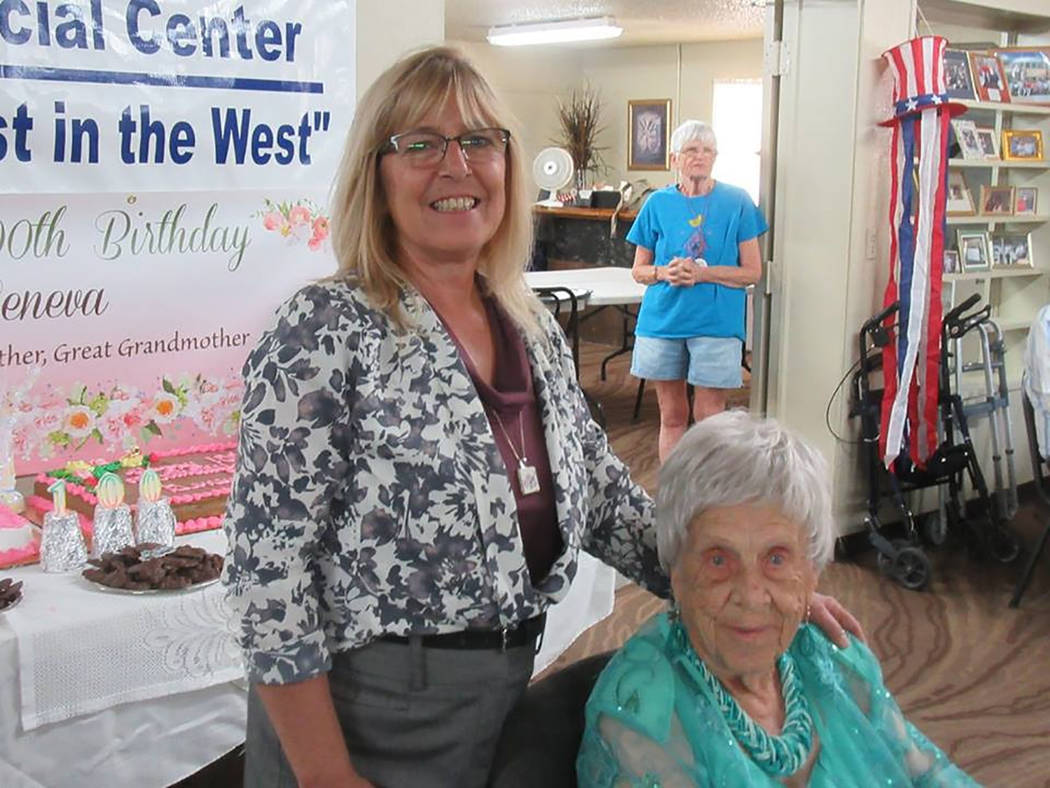 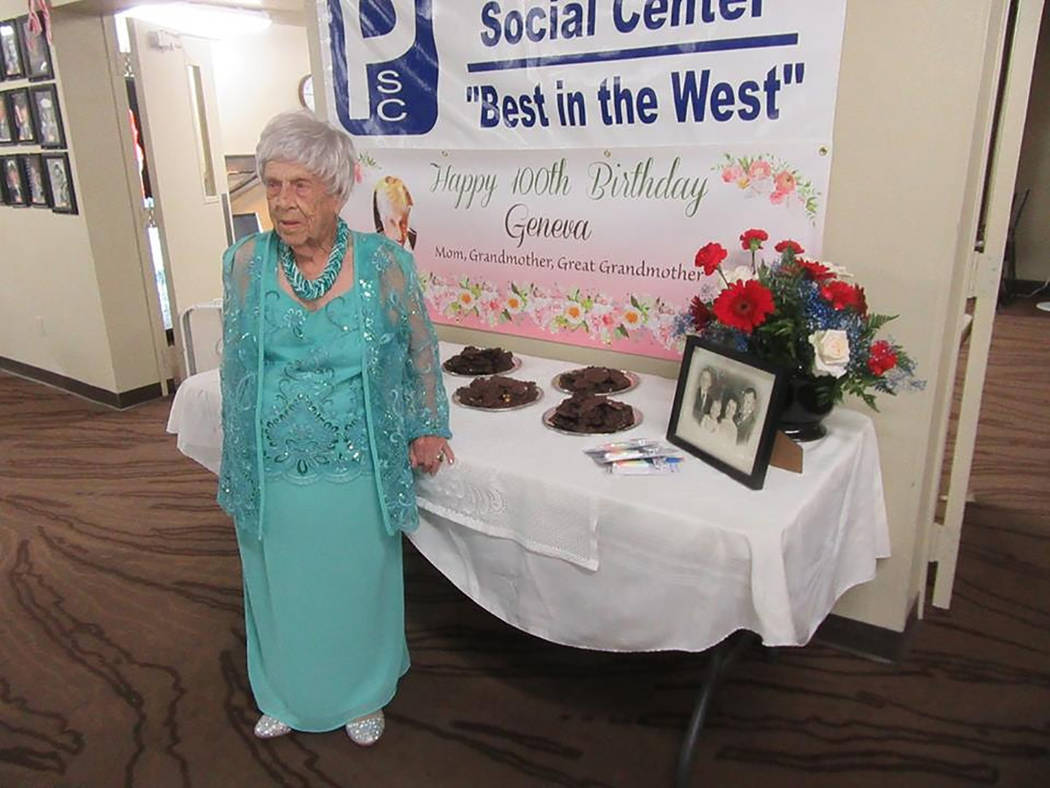 Special to the Pahrump Valley Times 100 year-old Pahrump resident Geneva Dulaney was the guest of honor during her 100th birthday party at the Pahrump Senior Center on July 24. Dulaney was born on July 23, during the Woodrow Wilson administration back in 1917.

It would be safe to say that 100-year-old Pahrump resident Geneva Dulaney is probably one of a handful of locals who can claim she was born not long after the June 19, 1917 solar eclipse occurred back when Woodrow Wilson was president of the United States.

In fact, Dulaney has lived through 18 American presidential administrations.

As such, a birthday party was hosted at the Pahrump Senior Center for Dulaney, who became a centenarian on July 23, 2017.

Dulaney was surrounded by family and many of her senior center friends during the celebration the following day on July 24.

“We had over 120 attend and several dignitaries, including Assemblyman James Oscarson and representatives from Senator Dean Heller’s and Congressman Ruben Kihuen’s office, along with Nye County Commissioner John Koenig and Nye County District Attorney Angela Bello,” said site manager Anne Blankenship-Harris. “They all presented Geneva with a proclamation honoring her 100th birthday. We were all very excited for her.”

As a result of her longevity, Dulaney, born Geneva Delliah Brown, is the last surviving member of her family.

She had three brothers named Ira, Millard and Eddie, along with four sisters, Deleina, Sarah Jane, Irma, and Freda.

Dulaney was married in 1936 to Robert (Bob) Leo Dulaney of Burnside, Illinois, after they met at a dance in Carthage, Illinois.

They were married for 67 years, before her husband contracted Legionnaires disease and passed away in 2005.

He retired as a Vietnam veteran.

Not long after, Dulaney retired, and the couple traveled throughout the United States in their travel trailer, where they became what’s known affectionately as “Snowbirds,” spending their winters in Apache Junction, Arizona, from Hamilton, Illinois.

Dulaney remained in Hamilton after her husband’s passing until her son moved her and her dog Missy, to Pahrump in 2016.

“She now lives here at the Sunset Mobile Home Park,” Blankenship-Harris said. “Her son Dale and his wife live in the Mountain Falls community and take care of all of her needs. Geneva has four grandchildren, Mike, Kim, Angela and Ronnie Dee, who sadly, is deceased. She also has nine great-grandchildren. Geneva’s favorite pastime was quilting and making birthday, anniversary and wedding cakes. She estimates that she made hundreds of cakes and over 60-plus quilts over the years.”

“Geneva told us a story about one of her neighbors named Brownie,” she said. “He took her trash out one day and when she saw him, she goes out and says ‘Brownie, would you marry me?’ She now says that it was a joke, and that she was just playing with him.”

Dulaney was offered to cut the first piece of her birthday cake at the party, where many well wishes were given by those in attendance.

“The sparkling cider was donated by Nathan Adelson Hospice and we toasted her and sang Happy Birthday,” Blankenship-Harris said.

“Her son Dale and his wife Donna Dulaney donated a quilted tapestry, which was quilted by her daughter-in-law. There was also a beautiful plaque to go with it, and it’s now hanging in Geneva’s name at the Pahrump Senior Center. We want to thank everyone for attending and helping us celebrate this wonderful lady on her special day. It was beautiful and Geneva was overwhelmed.”