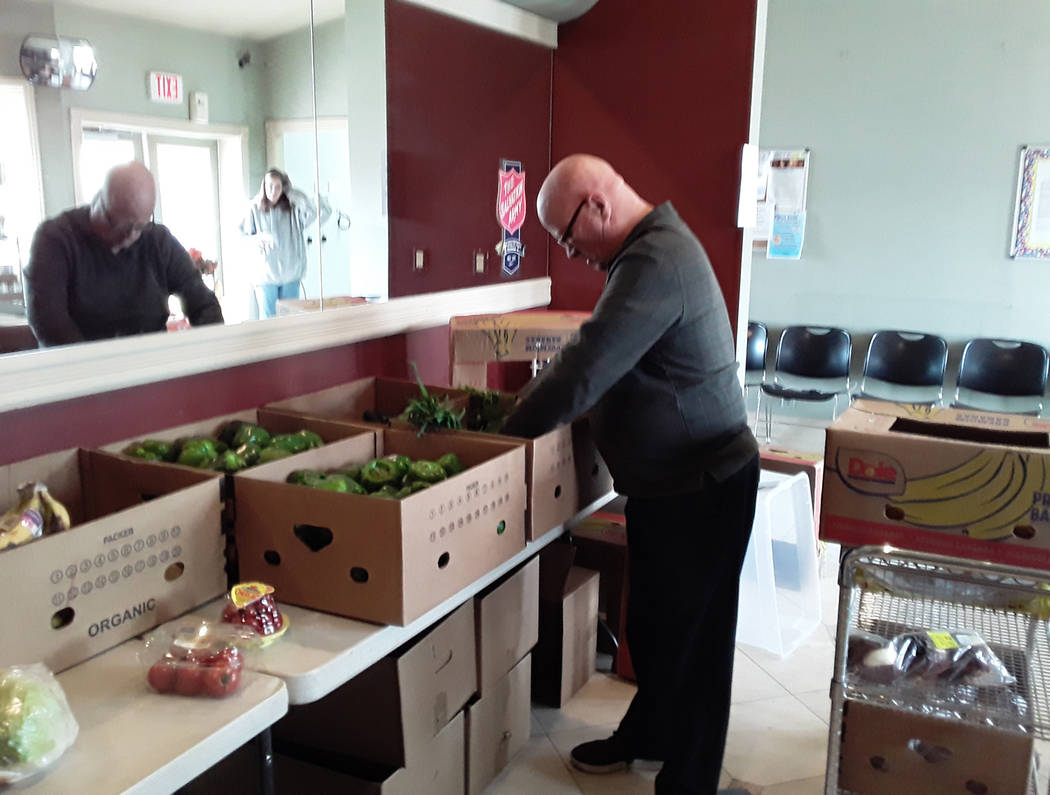 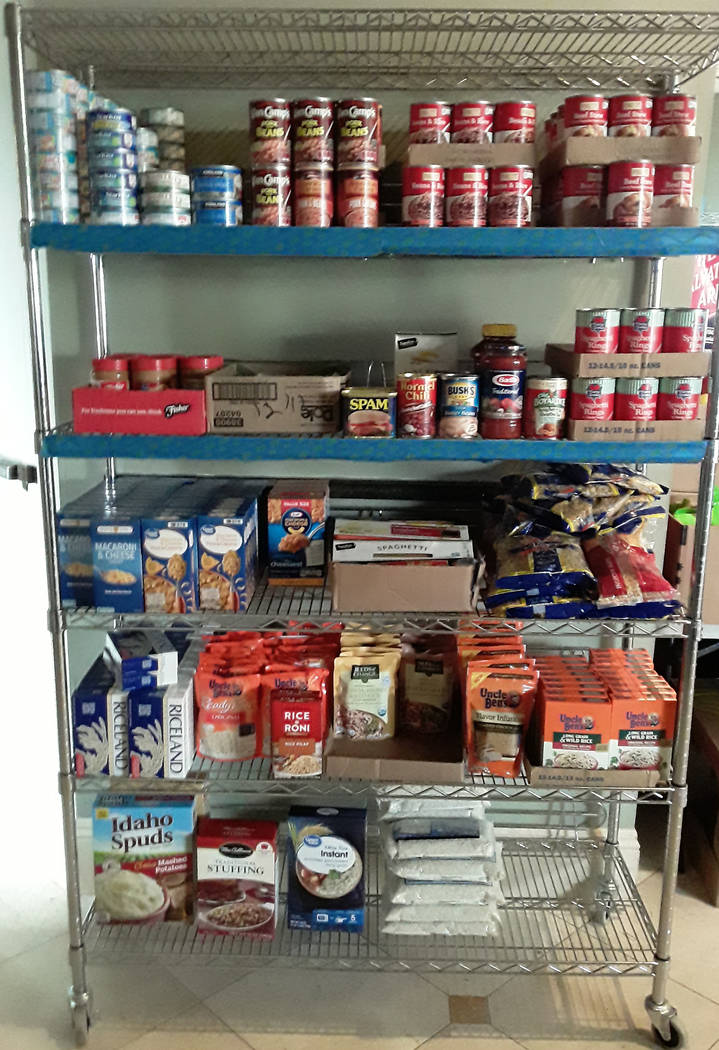 Selwyn Harris/Pahrump Valley Times Pastor Watt also noted that those who sign up for the Golden Groceries program still qualify for other food assistance needs the Salvation Army offers. 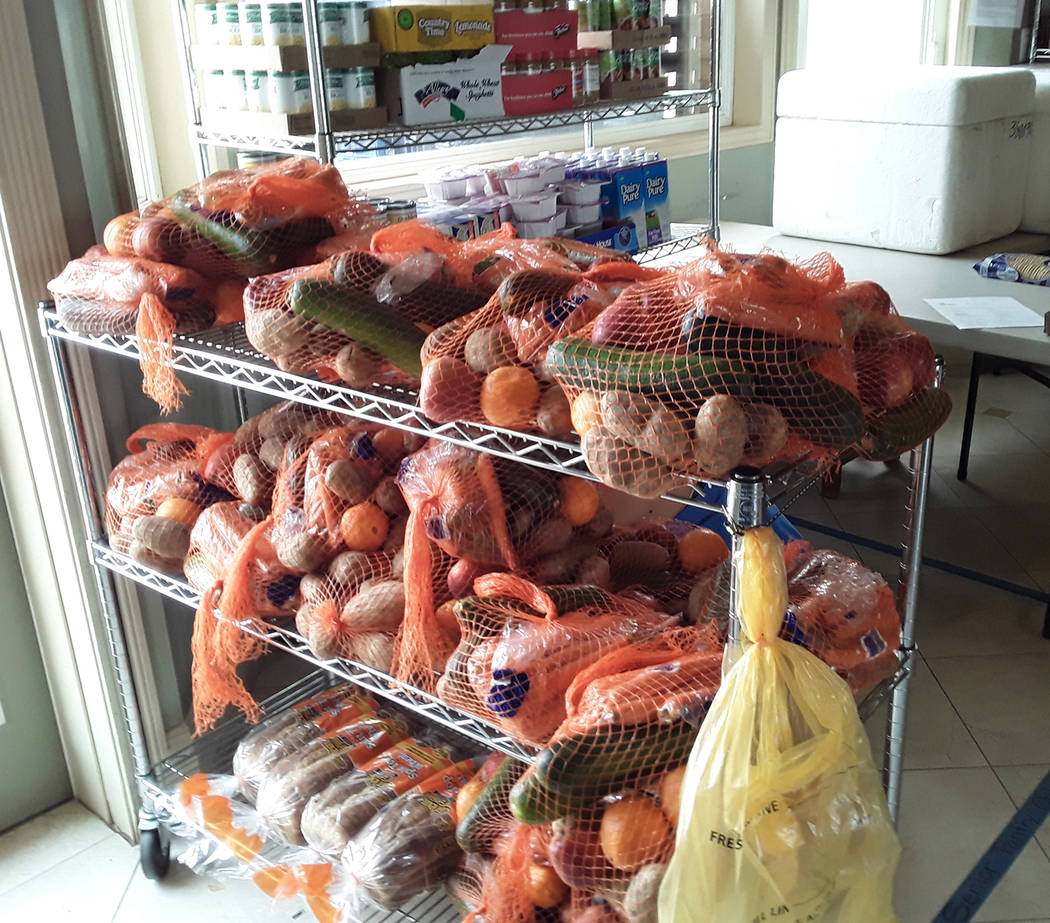 Selwyn Harris/Pahrump Valley Times Recipients for the Golden Groceries food program must be at least 60 years of age, where they can receive a loaf of bread, a 10 pound bag of vegetables and a can of Ensure. The seniors can also select 10 additional food items, twice a month.

“Basically, it’s additional food twice a month for seniors,” Watt said. “I do happen to have people coming in and telling me that seniors are 55 and over, but I don’t write the program rules.”

The only qualification for the Golden Groceries program for residents in Pahrump and several surrounding communities is that they must be age 60 or over.

Three Square, which designated the Pahrump Salvation Army center as its venue for Golden Groceries earlier this year, is Southern Nevada’s only food bank providing assistance to residents of Lincoln, Nye, Esmeralda and Clark counties, according to the organization’s website.

The new program was pegged to get underway on Nov. 1, 2019, according to Pahrump Salvation Army’s social media page.

“Qualified individuals come in to the center in Pahrump, and they will receive a loaf of bread, along with a 10-pound bag of vegetables and a can of Ensure,” Watt said. “These individuals also get 10 other food items that they can select. There are a couple of doctors here in town that write what they call a food prescription, so if someone has kidney issues or diabetes, it’s foods that are designed for those with health conditions.”

As the program started late last year, Watt said word is certainly getting around about Golden Groceries.

“November was our first month and we had a lot of people coming in the door,” he noted. “On a low day, we were serving 70 clients and on high days, we had in excess of a hundred clients.

“That is from the number tags that we handed out. The recipients didn’t all seem to hit the computer and some people got tired of waiting, because we still had the requirement of logging them into the computer which takes time to put in their information, but once they are in the system, it’s a real quick process.”

Watt also said the program is set up to dissuade some individuals from gaming the system.

“It prevents people from coming in and saying that they haven’t been here before, and we had a couple of people who were caught,” he said. “We do get some people who try to work the system, but the majority of people don’t do that. We want to help people get what they need and be able to move on, and not keep them waiting. This is not a one-time thing. This is a continuing program.”

Additionally Watt noted that those who sign up for the Golden Groceries program can still qualify for other food assistance the Salvation Army offers.

“They are also still able to get the regular food bank program which we have, which is once every 30 days,” he said. “We say 30 days, but we can actually go down to 25 days. Basically, the standard food pantry program is set up for those with low income or no income, which could be for the homeless, the low income, those who are on disability, veterans and senior citizens.”

The only other requirement Watt said is individuals must live in the agency’s service area.

That would be of course Pahrump, Shoshone, Beatty, Indian Springs, Tecopa, Charleston View, and Sandy Valley,” he said. “Sometimes I get one or two people a month coming in from outside of Pahrump, but it’s really Pahrump taking care of Pahrump, and that’s where the holiday bell ringing comes in because the money raised through the bell ringing, stays in Pahrump, taking care of people in Pahrump.”

The Pahrump Salvation Army is located at 721 S. Buol Lane.