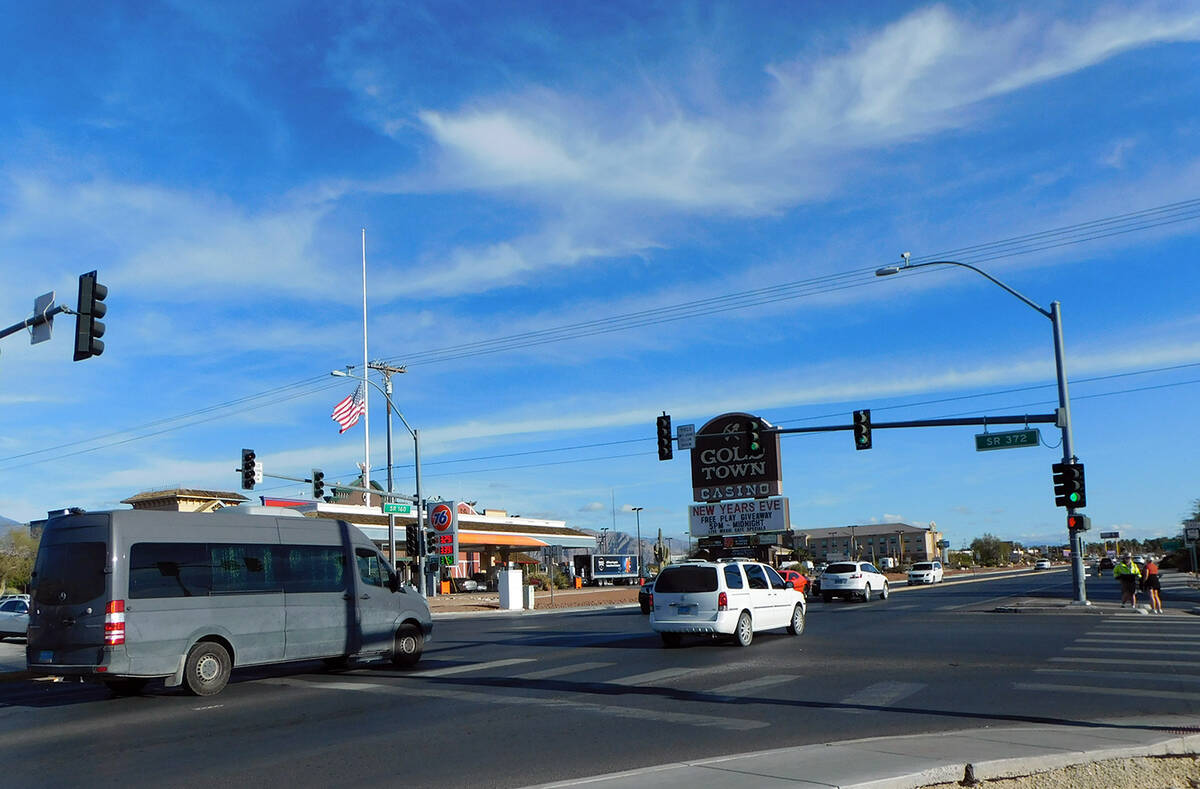 Robin Hebrock/Pahrump Valley Times Crews with Mc4 Construction will be undertaking signal maintenance in Pahrump next week, beginning Monday, Dec. 13 and and concluding by Friday, Dec. 17. 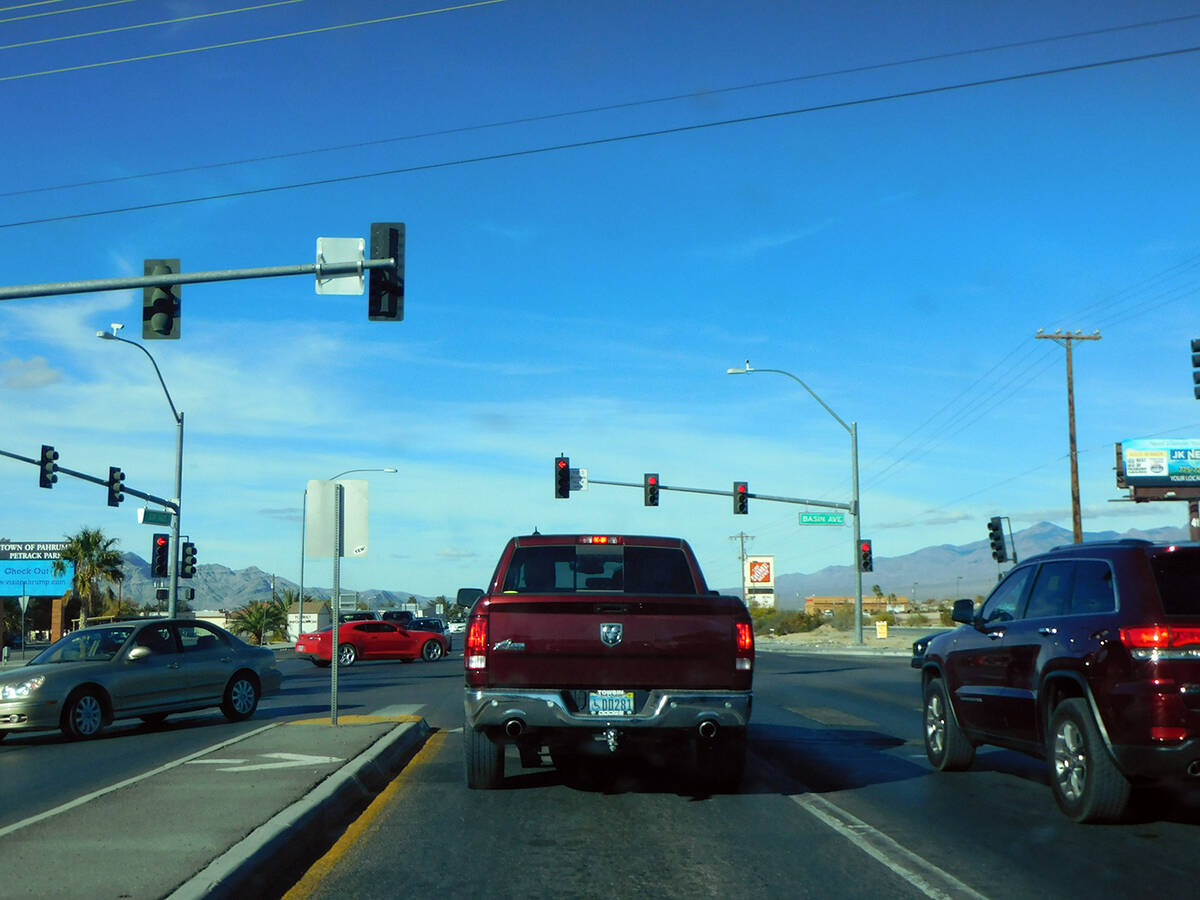 Robin Hebrock/Pahrump Valley Times All three of the valley's signalized intersections, including Highway 160 and Highway 372, shown, will see light maintenance in the coming week. 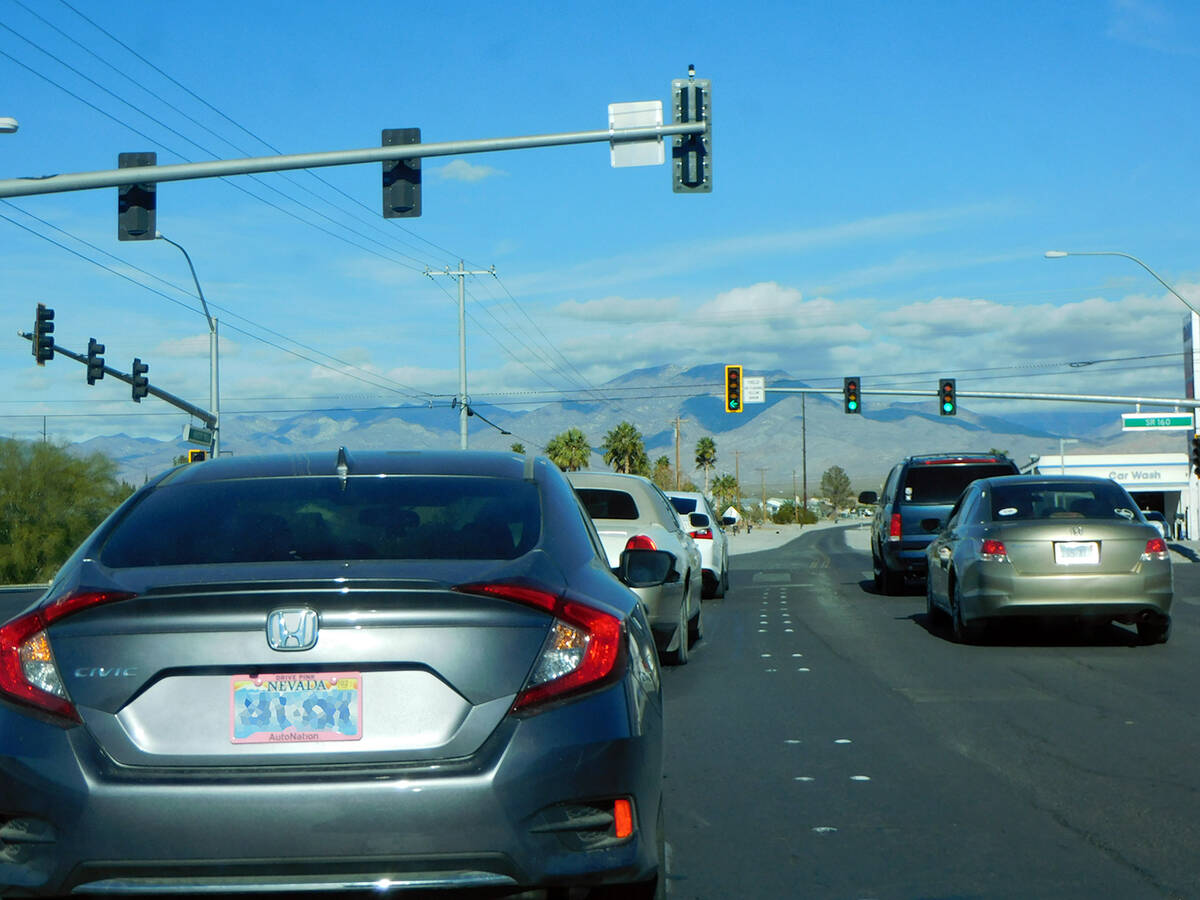 Robin Hebrock/Pahrump Valley Times The intersection of Homestead Road and Highway 160, seen here, will have its traffic lights checked along with the valley's other two signalized intersections.

Drivers in the Pahrump Valley have undoubtedly noticed lately that the traffic signals along Highway 160 haven’t been functioning optimally. Motorists sometimes have to wait to execute their left-hand turns onto and off of the highway regardless of the presence of pedestrians, and those sitting at red lights are often waiting for the green light to allow them to make their way through the intersection despite a lack of cross traffic. It’s a situation that has not gone unnoticed by the county either, and as a result, Nye County Public Works has now contracted with a company to perform maintenance on the area’s three traffic lights.

Mc4 Construction LLC, a Las Vegas-based contractor with expertise in traffic signals, has been selected to perform the work, which will commence on Monday, Dec. 13. As Nye County Public Works officials emphasized, the project is not an extensive one and should not last more than a few days, with the expected wrap-up date pegged at Friday, Dec. 17. Throughout the week, crews with Mc4 Construction will be inspecting the lights and providing updates where needed but they will be doing what they can to lessen the effect of their undertaking on those who utilize Highway 160.

“They (Mc4 Construction) will be starting Monday, they will be doing all of the signal maintenance on all the stoplights in the Pahrump Valley, the three stoplight intersections that we have. Hopefully everyone gives them a little latitude,” Bolling told commissioners that morning.

Nye County Commissioner Frank Carbone interjected to ask why Bolling had made such a remark about “latitude”, to which Bolling explained that as with all road projects, there will be impacts to motorists while the signal maintenance is underway. However, the work schedule was drafted to help mitigate those impacts to the greatest extent possible and as such, he wanted the community to show patience and understanding as the work commences.

“There’s going to be traffic control, I don’t want people to be upset because they (Mc4) are out there doing the maintenance. It’ll help with the stopping and timing of the stoplights themselves, because right now, I think two of our lights are in default, where they let pedestrians go when there are no pedestrians present… So instead of letting the pedestrians go when there are none, they will just go ahead and let the cars go, with turn signals and all of that,” Bolling explained.

Nye County Public Works Director Tim Dahl then chimed in, remarking, “There shouldn’t be any shutting down of the lights. They are going to check every single light throughout all three intersections and every traffic cabinet to make sure everything is up to date, every piece of software is up to date. Anything that is in default mode will be put back to where it is operated either by the cameras or by the sensors on the ground.”

Bolling added that Mc4 Construction will have to shut down lanes on occasion while conducting the maintenance but noted that lane closures will only be for a very brief period of time.

“It’s going to be such a quick delay,” Dahl assured, adding that the county is not going to allow contractor to perform work during the high-commute hours of the day, such as 8 a.m., the lunch hour or the later afternoon. “So they will be trying to operate their equipment in those lanes with a minimal amount of disturbance to flow of traffic,” Dahl said, while Bolling noted that Mc4 is expected to be done with the project by Friday of next week.