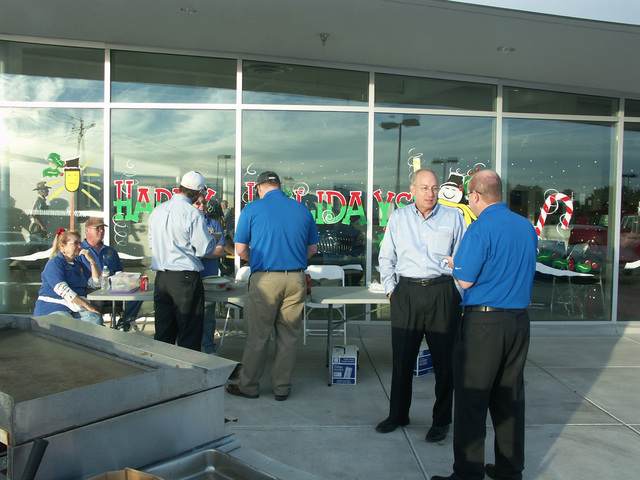 Feddy said the facelift was approved by General Motors’ corporate hierarchy and last Tuesday he invited the community to view the finished project.

“We have been open for about nine years and General Motors along with our owner Greg Heinrich decided to invest in the community and our dealership. It was completely refurbished and our owner has been in the southern Nevada area since 1969. He wanted to double down on his investment in Pahrump to keep bringing in first class cars to the community. We just wanted to have a grand reopening and celebrate the occasion,” he said.

Over the years, the facility has been involved in numerous car washes benefiting athletic and cheer-leading teams at the high school.

The “Grand Reopening” was just the latest outreach effort.

“We are again giving some money to charity. There will be about $5,000 split between the Lions Club, No To Abuse, Food for Thought and the Pahrump Disability Outreach Program,” he said.

“Out of the 31 deals we made from our most recent tent sale, each of those customers got $100 in ‘charity gaming chips’ and they could choose to split amongst the charities. Other people who came to the event got $5 to give to the charity of their choice so the charities will not leave empty-handed. There are no losers in charity. Everybody wins. In fact, if there are not enough people to give all the chips away, I will evenly split the chips out. We are going to give away that money, one way or another,” he said.

Feddy had a humorous description of the grand reopening, which included a free barbecue, entertainment and giveaways.

“This kind of an event is more about sales prevention than sales because we are busy and tied up. There’s a lot of distractions and we don’t sell a lot of cars during these kinds of events. Maybe somebody will remember we did this kind of event and later on down the road it generates a sale,” he said.

Feddy mentioned another special event coming up later this week.

The Lions Club’s annual Breakfast with Santa is the next event sponsored by the dealership.

The event coincides with the club’s “Letters to Santa” campaign.

Lions Club member Larry Bai said any child who writes to Santa will receive a gift.

The program has been going for more than 10 years.

“Every child that writes does get something aside from getting the letter back. It is generally hand-delivered. So far we got about a dozen letters and the program is now in full swing,” he said.

Bai said the entire community is invited to join in on the holiday celebration.

“We also hope that individuals and businesses in the area will donate to the Pahrump Valley Lions Club for Santa so we can keep the program going. We can’t survive without support from the community. My wife Sue, who is the chief shopper, does 99.9 percent of the shopping in Pahrump so the money stays here. We both feel very strongly that the money, which comes from the local community, should be spent in the community,” he said.

Breakfast with Santa will run from 8 a.m. to 10 a.m. at Pahrump Valley Auto Plaza this Saturday.