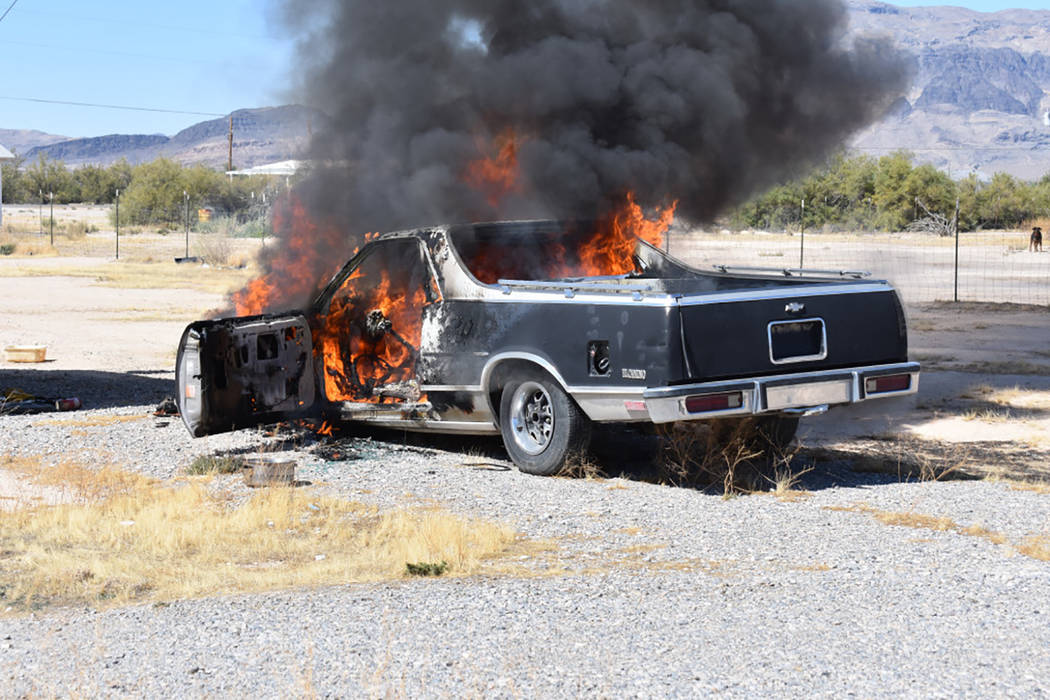 Special to the Pahrump Valley Times Pahrump fire crews were dispatched to an early afternoon vehicle fire along the 2300 block of North Linda Street, just on Wednesday Sept. 27. The fire was quickly controlled with no extensions to a nearby residence. Fire Chief Scott Lewis said the cause appeared to be a mechanical failure within the engine compartment. 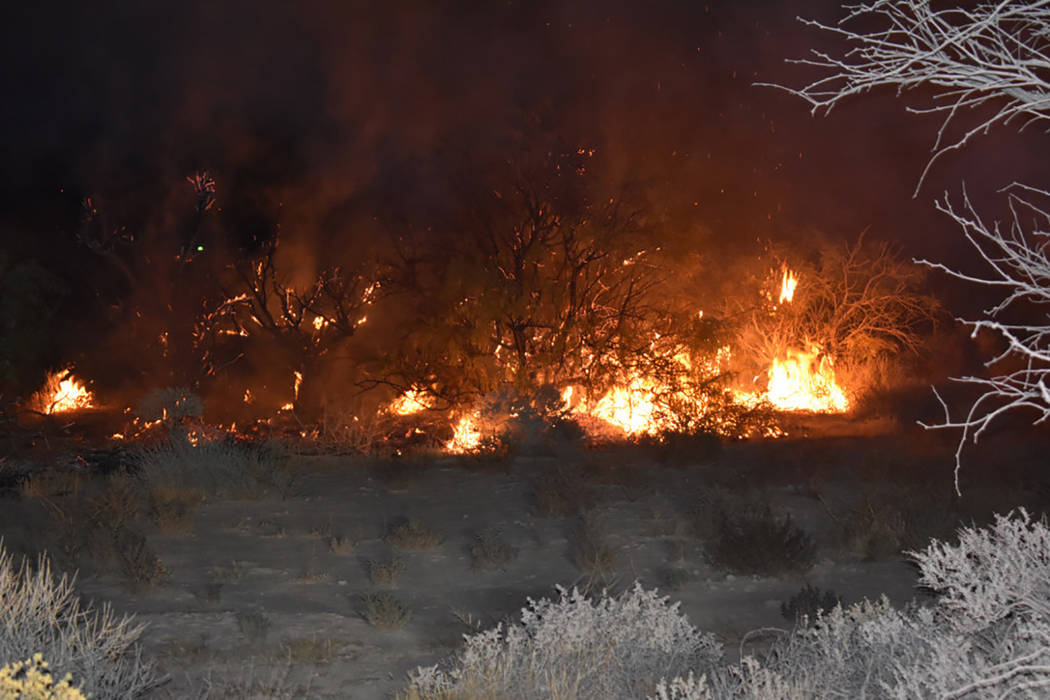 Special to the Pahrump Valley Times Fireworks is believed to be the cause of a 10 p.m. brush fire along the 600 block of Marie Street on Friday Sept. 29. Pahrump crews extinguished the fire without incident. No injuries were reported. 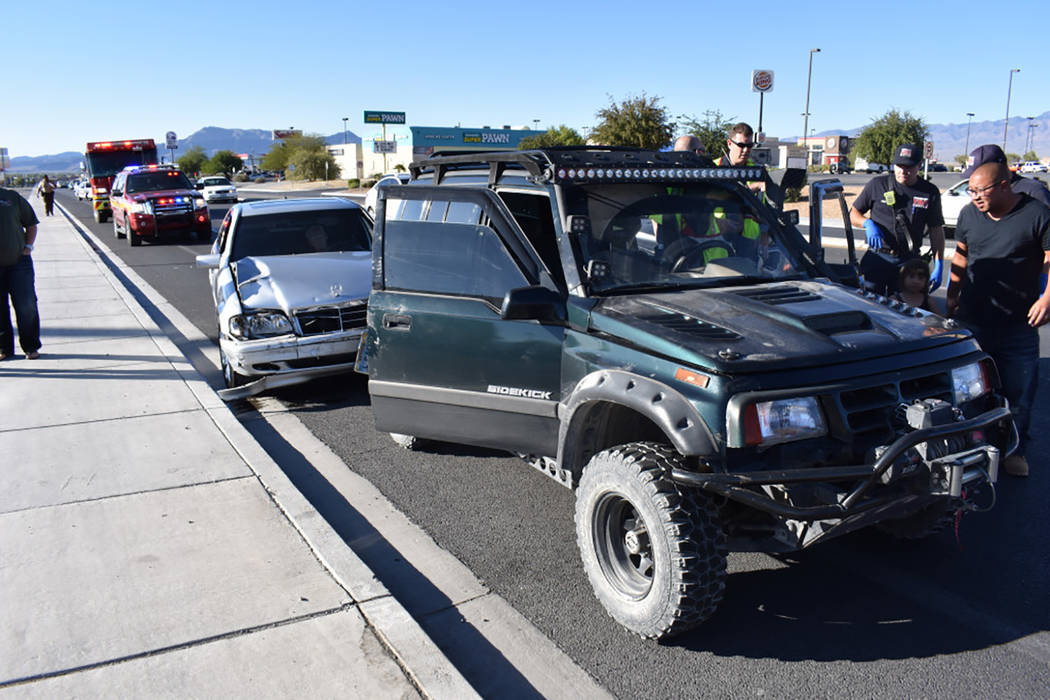 Special to the Pahrump Valley Times No serious injuries resulted from a two-vehicle collision along Highway 160 just north of Highway 372, last Friday Sept. 29. Both vehicles sustained substantial damage. The exact cause of the collision is under investigation.

Brush and vehicle fires dominated the service calls for local fire crews as of late.

Pahrump Valley Fire and Rescue Services Chief Scott Lewis said crews were dispatched to a vehicle fire on the 2300 block of North Linda Street, just before 12:30 p.m., on Wednesday, Sept. 27.

“Upon arrival, crews found a well-involved passenger vehicle fire in close proximity to the primary doublewide manufactured dwelling,” Lewis said. “That fire was quickly controlled with no extensions to the dwelling and there were no injuries reported. The investigation revealed a mechanical failure within the engine compartment.”

The following day, fire crews were dispatched for a second vehicle fire on the 1800 block of East Calvada Boulevard, just after 6 p.m.

“Upon arrival, we found a mostly-extinguished engine compartment fire that was extending to the passenger compartment next to an apartment building,” Lewis noted. “The fire was quickly controlled with no further extension and there were no injuries.”

At roughly the same time, fire crews responded to a two-vehicle collision at Dandelion and Calvada, roughly 50 feet from the vehicle fire.

Crews assessed the scene and found no injuries.

On Friday, Sept. 29, fire crews were summoned to another collision at Highway 160 and Bell Vista Road, just before 3:30 p.m.

“Upon arrival, crews found a two-vehicle accident with one patient mechanically entrapped inside the vehicle,” Lewis said. “The patient’s injuries met criteria for flight, and that patient was transported from the accident scene to Mercy Air Base 21 where they were subsequently flown to UMC Trauma in Las Vegas.”

Several hours later, fire crews were dispatched to an explosion and fire of unknown origin on the 600 block of West Marie Street at 10 p.m.

“While responding, crews were notified that the fire was possibly a structure fire with people trapped inside,” Lewis said. “However, upon arrival, we found a large brush fire next to a primary dwelling. The explosion that had occurred setting off the fire was actually found to be fireworks that were placed on the street. Crews extinguished the fire without incident and there were no extensions to the dwelling. No injuries were reported.”

“None of our resources were requested, mainly because it would have taken too long to arrive on scene,” he noted. “It was such a dynamic, fast-moving incident where those people were being transported by cabs, personalvehicles and ambulances. Again, there was such a rush to get people out of the area.”

Regarding the safety of first responders during such an incident, Lewis said emergency personnel are trained to properly respond to any kind circumstance and situation.

“Actually, from our perspective, it’s through preparedness,” Lewis said. “It’s important to remain calm and try to identify where the shooter is located. That was one of the most difficult scenarios because they did not know where the shooter was, thus they didn’t know where to start sending people. We saw that in a lot of the video footage.”

“Many people were fleeing the immediate area where they were observing the concert,” he said. “They were not necessarily always headed in the right direction and they were redirected by the resources on the ground, including Las Vegas Metro officers, whom I think did a really good job.”