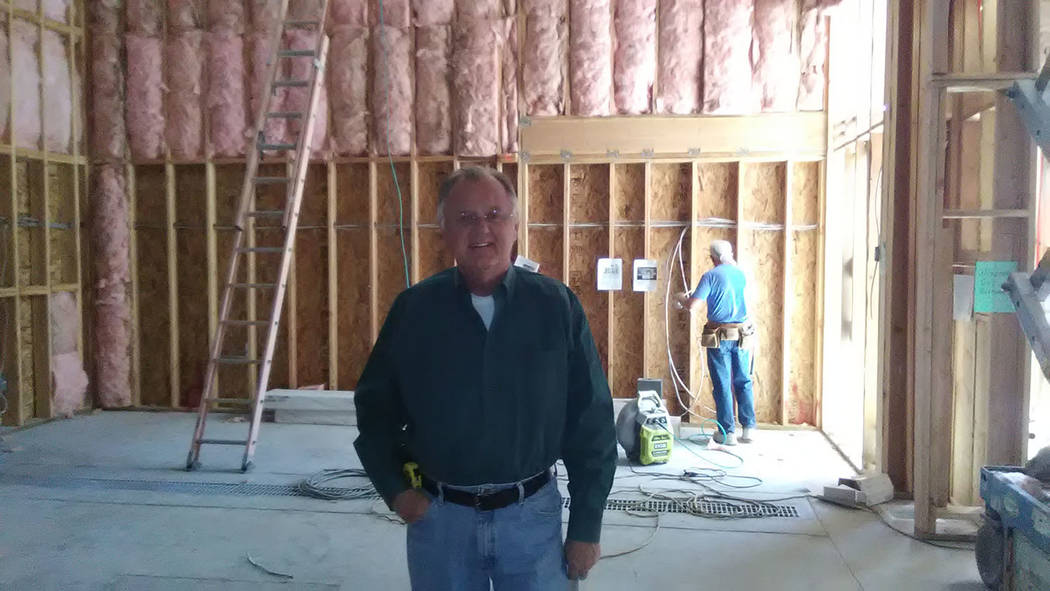 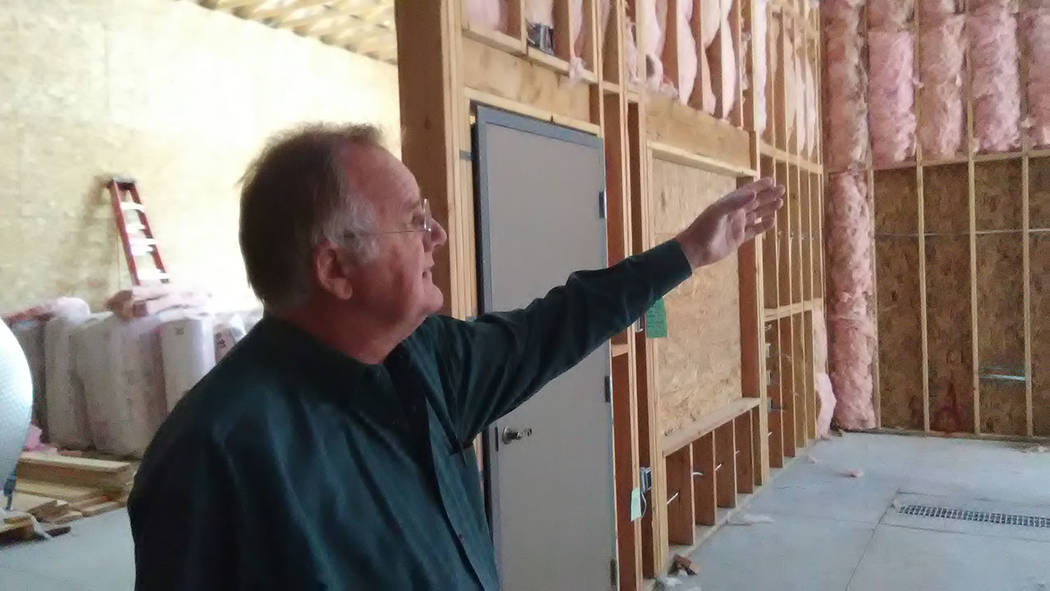 Selwyn Harris/Pahrump Valley Times In January 2003, Loken and his wife Gretchen took control of the winery and began the long and much needed process of upgrading and renovating the entire property. The upgrades included a brand new, fully functional wine production cellar along with a bottling line, grape crushing, and pressing equipment. 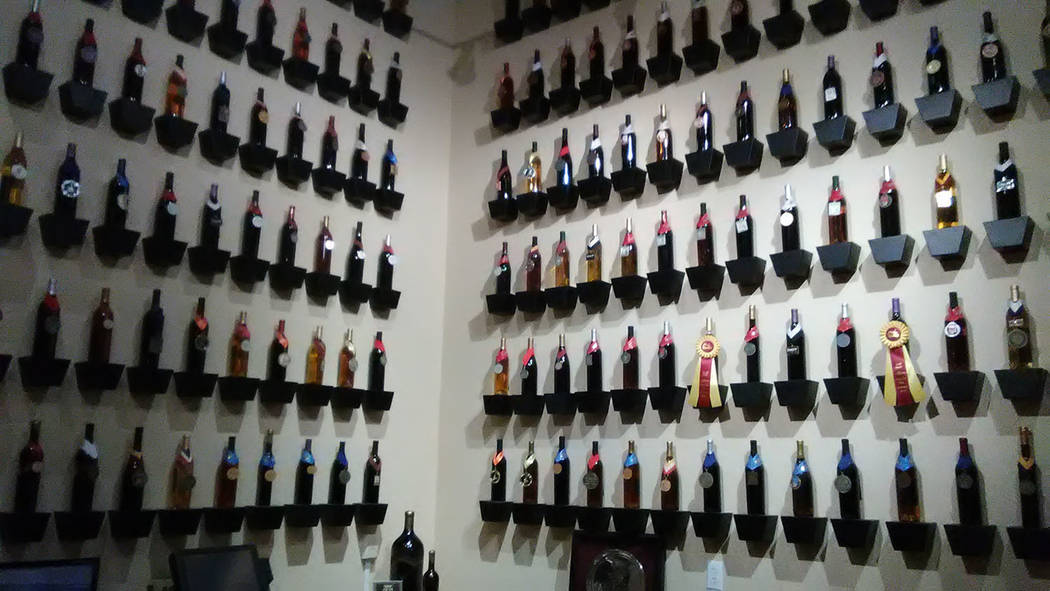 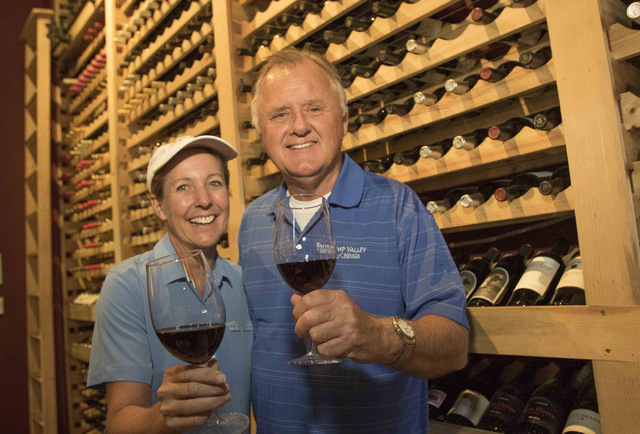 Pahrump Valley Winery owners Bill and Gretchen Loken continue to enjoy the fruits of their labor.

Fresh off the heels of the winery’s annual Grape Stomp this month, the couple is forging ahead with plans to expand the facility at 3810 Winery Road.

“From the equipment to the tanks, to the way the room is finished out, along with the cooling equipment, everything we are doing is absolutely top of the line,” Bill Loken said. “It will be a small, but a very state-of-the-art facility for here or anyplace.”

The new edition, Loken said, is roughly 7,000 square feet, with all new equipment from top to bottom, including the tanks, the bottling line, and the pressing equipment.

“There’s nothing like this in the entire state of Nevada right now,” he noted.

The completion date for the expansion is expected sometime next year.

The Pahrump Valley Winery opened its doors in 1990, where the first grape vines were planted.

Not long afterward, herds of wild horses in the area captured the first harvest.

Prior to a second planting, a fence was installed to protect the young grapevines.

Roughly 12 years later, the Lokens discovered the winery, where they felt it could have a bright future.

“In January 2003, we took control of the winery and began the long and much-needed process of upgrading and renovating the entire property,” Loken said. “We installed a brand new, fully functional wine production cellar, including new stainless steel fermentation tanks, a bottling line, grape crushing and pressing equipment.”

Additionally, refrigeration and cooling systems, along with a new oak barrel room for aging the wine rounded out the fixup.

“We added an all new tasting room and expansion, with a guest lounge and substantial new vineyard plantings,” Loken said. “We also upgraded the landscaped grounds. This complete and total renovation of the winery also included a new state-of-the-art kitchen and complete remodel for our restaurant, Symphony’s.”

Loken also said the winery initially had a small estate vineyard planted in the early 1990’s, but aside from the wild horses, those vines had never been harvested.

More than a decade later the Lokens successfully harvested the first one and a half tons of Zinfandel grapes.

“This resulted in our release of Nevada’s first-ever commercial red wine, which was our 2005 Zinfandel,” Loken noted. “The wine was a medium-bodied red wine with hints of cherry and cola. What is more surprising is that Zinfandel wine won “gold” at the Pacific Rim International Wine Competition, making it Nevada’s first gold medal winner for a homegrown wine. We also released the state’s first commercial ‘inter-specific,’ or hybrid wine in 2009, which was our award-winning 2008 Frontenac.”

At the time, Loken quipped, “We are bringing gold to the Silver State.”

Over time, Loken said he and his wife worked with various startup growers to help shape Nevada’s grape-growing industry.

“Not surprisingly, that was met with many challenges and the results had been mixed at times,” he recalled. “We began making great strides with several Nevada vineyards. We harvest over 10 acres of Nevada grapevines spread over four vineyards. Our Nevada-grown harvest for 2016, exceeded 35 tons of Nevada-grown grapes. Don’t think grapes can grow in the desert? Well, think again.”

On the issue of what his favorite wine is, Loken said it always varies.

“You can ask me about every two weeks and it will change,” he said. “I drive my wife crazy because I’ll eat the same thing every day, if I can, until I get sick of it and then I’ll get another favorite. On any given day, I have a different favorite wine.

“Right now, my favorite wine is a Nevada one called Mourvèdre, and it’s a French grape,” Loken said. “We love it. It is bigger than a Pinot Noir, but not as big as a Cabernet Sauvignon or a Zinfandel, because it’s kind of in between. We like to refer to it as Nevada’s Pinot Noir because it’s fruity and light. It’s a widely grown grape, but not very well known.”

Additionally, Loken spoke about a wine blended with a familiar flavor.

“We also have some chocolate-infused wine,” he said. “We would love to take 100 percent credit for that but we don’t. It’s the one wine we have where we actually work with our winemaker from out of state. They start it and we finish it. We loved it and thought we could really do some damage with this. We worked with him to kind of develop our own blend. It is working. Most big red wines pair beautifully with chocolate.”

As a result of their hard work and determination, the Loken’s efforts have not gone unnoticed over the years, as they’ve received scores of awards for their winemaking.

“We just got our 100th national wine award for Nevada wines,” he said. “We are no longer at 99 anymore. We are at an even 100 and that happened just a few weeks ago. About 70 percent of our awards are gold or silver medals. We now have 20 gold medals and roughly 51 silver medals and the balance are bronze medals for our Nevada wines.”

Loken noted the importance of the awards, as the tastings were performed ‘blind.’

“We would love to be there in the room and see the look on the faces of the judges when they give us a gold medal and they give a Napa winery a silver medal. They must look at each other in complete and total disbelief, but it is what it is,” he said.

“I think if the judges knew who made the wine going in, I don’t think we would do as well. That’s one of the reasons why we enter into the blind competitions because we want professional judges to judge and our wine with no preconceived notions of who we are, or what we are. That way we can get their honest opinion.”

Interestingly, Loken said wineries in Napa Valley, California have developed a great interest in Pahrump wines, due to all of the awards the winery has received over the years.

“In fact, one of my last trips to Napa Valley was at a very large winery there,” he recalled. “They insisted that I bring a couple of our bottles up there so that the winemaker, the assistant winemaker, and the CEO can sample it. We were all tasting the wine when the winemaker and the CEO said ‘damn, I can sell this wine. This is very good wine.’ They were very surprised. We released the state of Nevada’s first commercial red wine eight years ago, while Napa has been at it before Botox was invented. They’ve had a lot of time and experience.”

In fact, Loken said he’s actually invited Napa Valley winemakers to Pahrump, for a tour of the facility.

“We asked them why don’t they come out here and help us develop a wine industry,” he said. “When they try our wines and they come out and visit our place, they said ‘wow, maybe Nevada is a place that we should look at expanding into.’ We would love to see a bunch of wineries come into Pahrump. It’s called healthy competition because a rising tide lifts all boats.”

Also within the winery is the upscale restaurant, aptly named Symphony’s where Loken said guests can ‘dine by the vines.’

“Our upscale casual restaurant, Symphony’s, is named after our gold medal winning wine of the same name,” he noted. “While we are a white linen restaurant, we want you to dine lavishly yet dress comfortably.”