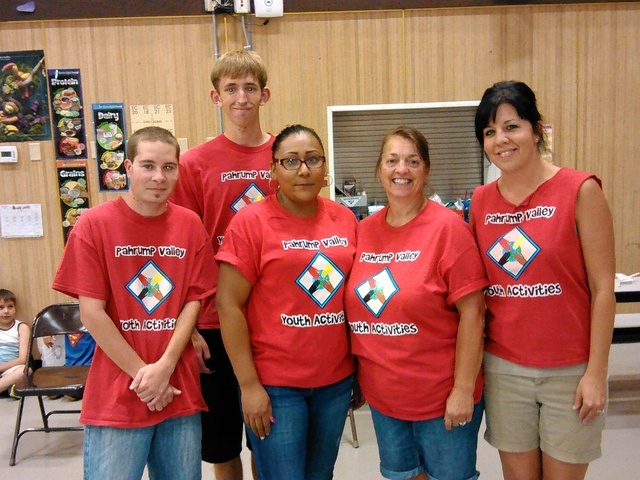 Many local parents and children are welcoming the return of the Pahrump Valley Youth Activities Summer Program, which provides summertime education and recreation for Pahrump’s youth.

The program started Monday, and is already at capacity after roughly 170 kids signed up since last week.

Nye County Chief Juvenile Probation Officer Tom Metscher said the organization may create a waiting list if additional parents have an interest in enrolling their kids.

“I think we’re going to serve close to 170 kids this year,” he said. “There is not a waiting list just yet, but if we get a bunch more parents that want to come in at the last minute, then we will have to create a waiting list. So far everyone that has shown interest in participating are doing it.”

The program is partnered with NyE Communities Coalition where trained staff operates daily activities for the program at J.G. Johnson Elementary.

Metscher said the program is more than just fun and games, as there are different rooms with different themes such as arts and crafts and a media room.

“The kids are rotated so they can experience each room,” he said “There are some education aspects to it as well. They have some visual arts as well as such activities as karaoke. There is also a reading program that they’ve incorporated, where it’s just like a reading challenge.”

Metscher also said that from time to time, the program receives support from local businesses.

“I believe last year Spring Mountain Motorsports Ranch brought a car in for the kids to check out,” he said. “The Nevada Silver Tappers performed an event with the kids and local businessman Tom Saitta likes to come in from time to time and play some music and sing for the kids. There’s just a wealth of different programs and activities for the kids to do.”

Parents, Metscher said, need not worry about the well-being of their kids as all of the program’s staff is trained and suited to handle the needs of the kids.

“Through the coalition, there are four AmeriCorps employees, which is a huge bonus for the program because it saves money on staffing and it involves people who are already interested in working with kids,” he said. “There are four this year and we only had one last year. The coalition is a huge part of making that program work and continuing.”

Nutrition is also included in the program.

The kids are provided with breakfast, lunch and an afternoon snack courtesy of the school district.

“Other than the afternoon snack, the breakfast and lunch is through the Nye County School District’s summer food program,” Metscher said. “That is the one thing that allows us to keep the program cost so low because if you’re going to have kids all day long, there is no way you can feed them at that particular cost. Without it, the program would probably be four times more than what we are charging now.”

At present, the age range for the program is kindergarten up through the end of the sixth grade, but Metscher said there is an element of flexibility.

“We are pretty much taking kids five and a half to kids that are just entering the seventh grade so the age range is roughly 6-to-12,” he said. “We do have some flexibility with kids who are a little younger than six and a little older than 12. There are times when kids have too much time on their hands during the summer months which explains why we are so busy here at juvenile probation.”

The program essentially replaced the Pahrump Boys and Girls Club after it shut its doors more than five years ago.

Metscher said the program fills a huge need for a lot of parents who are working during the day, as the doors open just before 8 o’clock in the morning.

“They couldn’t pay for a week of babysitting for what this summer program cost so it definitely meets a huge need and it’s really popular with the kids,” he said. “There have been very, very, very few problems with the kids over the past five years because the staff does such an awesome job and the kids love them.”

The program receives support from local businesses as well as private donations and corporate sponsorships.

Metscher also credited NyE Communities Coalition and the school district for their ongoing assistance and support.

“They are the unsung heroes with what they provide and their overall support of the program,” he said. “They provide all kinds of resources and the coalition manages all of the oversight with the employees, paperwork and all of the tracking. They’re doing all of that management right now because PVYA is not yet a 501c3 but we’re working on it.”

Parents who want to learn more about the program and information on the waiting list can logon to www.pvya.net.