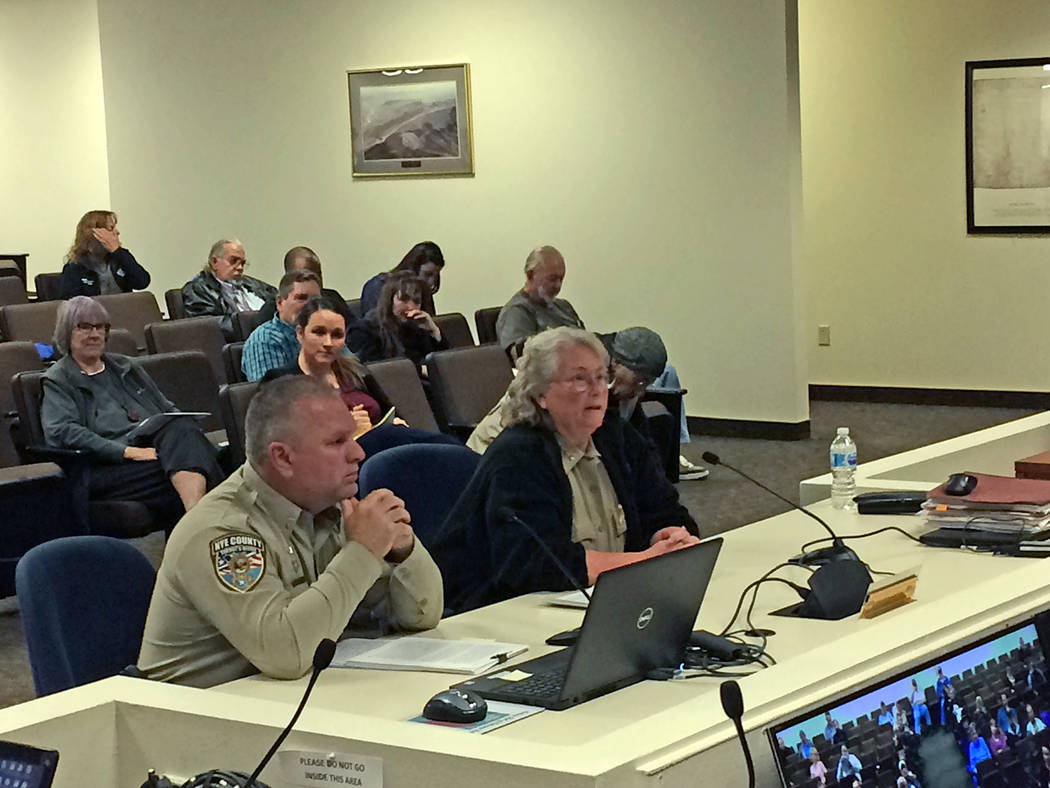 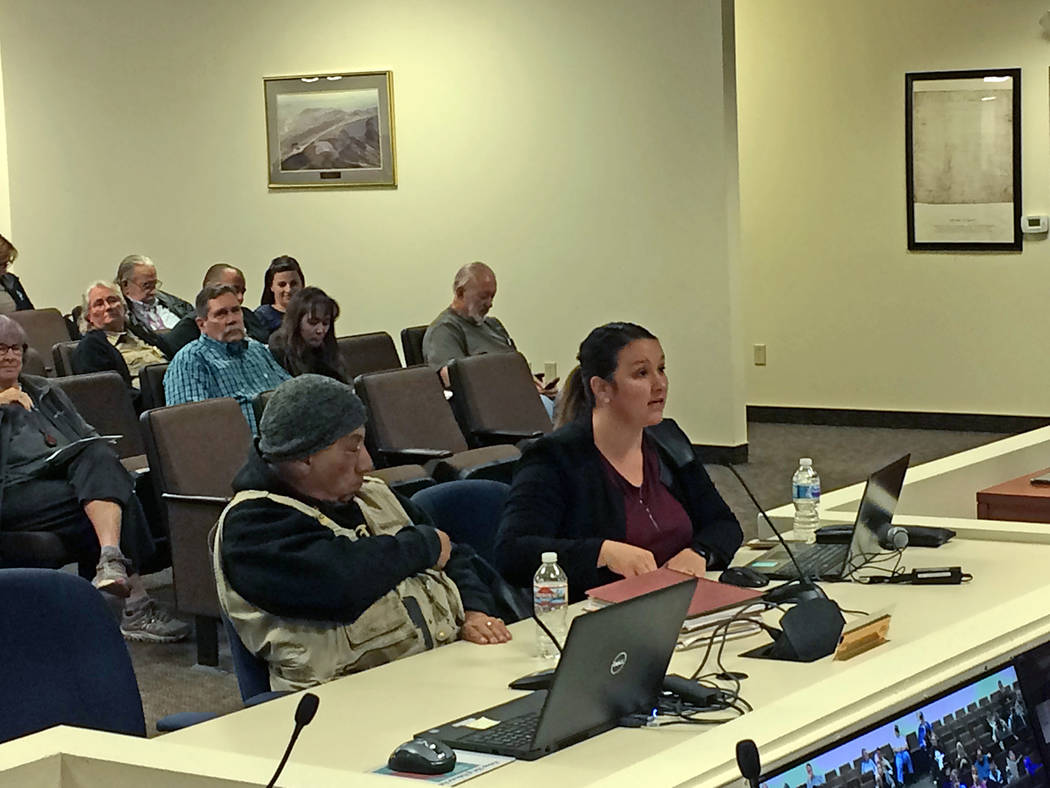 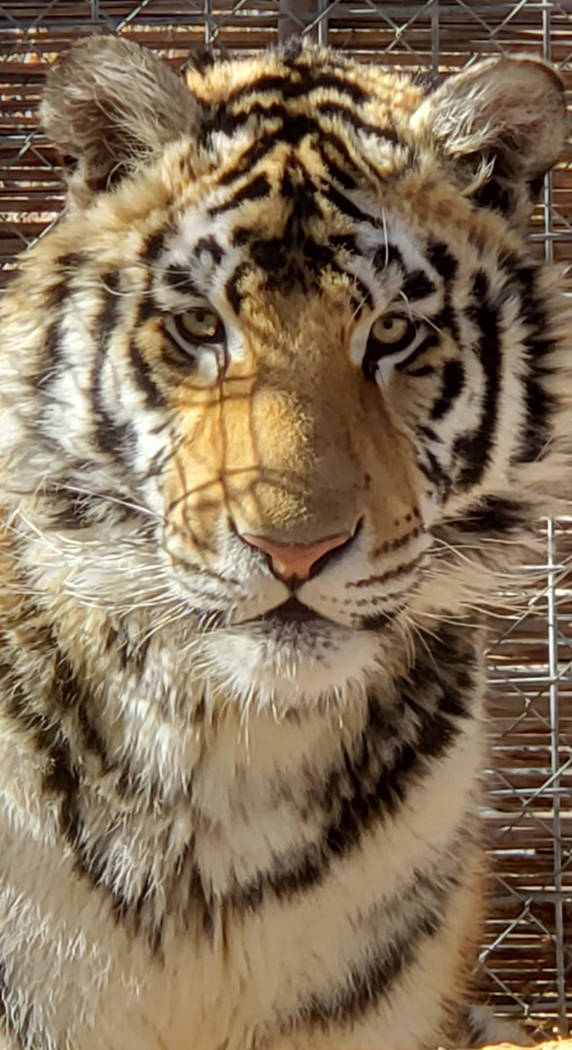 Special to the Pahrump Valley Times Taken by Kayla Mitchell, this photo shows a tiger named Abraham, one of the 10 tigers owned by Kayla and Karl Mitchell.

A longstanding battle over tigers in the Pahrump Valley has finally reached a conclusion, with the Nye County Commission voting to grant local tiger owner Karl Mitchell’s appeal and reverse the denial of a Special Conditions Animal Permit.

Mitchell is now allowed to legally keep his 10 exotic cats at his valley home, located on Woodchips Road near the northwest edge of town. Special conditions were attached to that action however. Mitchell is restricted from exhibiting the tigers or transporting them for any reason other than medical care or in the event of an emergency.

In addition, when transporting them, Mitchell is required to provide Nye County Animal Control with 24 hours prior notice.

The appeal hearing was held during the Nye County Commission’s Tuesday, Feb. 19 meeting and included more than two hours of intense debate between Mitchell’s legal representation and members of the Nye County Sheriff’s Office, which operates animal control.

There are two permits needed for someone to keep animals such as tigers in Pahrump. First is a Conditional Use Permit. The second is a Special Conditions Animal Permit.

Both of these permits for the tigers in question had originally been held by Kayla Mitchell, Karl’s attorney Arlette Newvine explained. However, Newvine added that delays involving inspections necessary for the renewal of Kayla’s permits in 2017 prompted Karl to apply for entirely new permits in his own name, with the intention of ensuring they remained in compliance.

Karl had successfully obtained a Conditional Use Permit for the tigers in Feb. 2018. At the same time, he applied for the second permit, the Special Conditions Animal Permit, Newvine explained.

The Nye County Sheriff’s Office then denied Karl’s application for the Special Conditions Animal Permit in July 2018, leading Mitchell to appeal that decision to the commission.

The sheriff’s office cited a series of reasons for denial, including a slew of allegations regarding exhibition of the tigers, which Karl is not authorized to do without first obtaining a USDA license for such activity.

In its denial letter, the sheriff’s office stated it had received complaints about the Mitchell’s exhibiting, both on their property and outside of it, providing photos of several people interacting with tigers.

The letter included details of an interview with a gentleman who stated he had paid Karl to bring a tiger cub to the Tropicana in Las Vegas, which the office deemed exhibiting.

The sheriff’s office also stated that Kayla’s Conditional Use Permit had expired so the couple was essentially in violation of the county’s code, another reason the office decided to deny the application.

Newvine argued fiercely against each of the sheriff’s points of reasoning, declaring that the sheriff’s office had failed to provide concrete evidence of exhibiting.

She backed up her statement by citing the fact that no charges had been filed against the Mitchells, either by Nye County, Clark County or the USDA.

She also asserted that the photographs the sheriff’s office had provided as evidence of exhibiting did not really constitute exhibiting, as they were either quite old or otherwise featured close friends of the Mitchells.

After each side had had its say, the decision was in the hands of the commission, which was divided in its opinion and only narrowly reached a conclusion.

Commissioner Donna Cox made the first move toward resolution, motioning to overturn the denial and issue Karl his Special Conditions Animal Permit.

Commissioner Leo Blundo seconded the motion but when put to a vote, it resulted in a deadlock of 2-2, with Cox and Blundo for, commissioners John Koenig and Debra Strickland against, and commissioner Lorinda Wichman absent.

Strickland then made a motion to deny the appeal, which Koenig seconded. That vote, too, resulted in the same tie. Strickland explained that her main concern was with transportation of the tigers and Blundo took that information in consideration to form yet another motion.

Blundo proposed to overturn the denial of the permit contingent upon adding special conditions. These include the restrictions on exhibiting and transporting the exotic felines as well as the requirement of advance notice of transport. That motion passed 3-1 with Koenig the sole voice against.