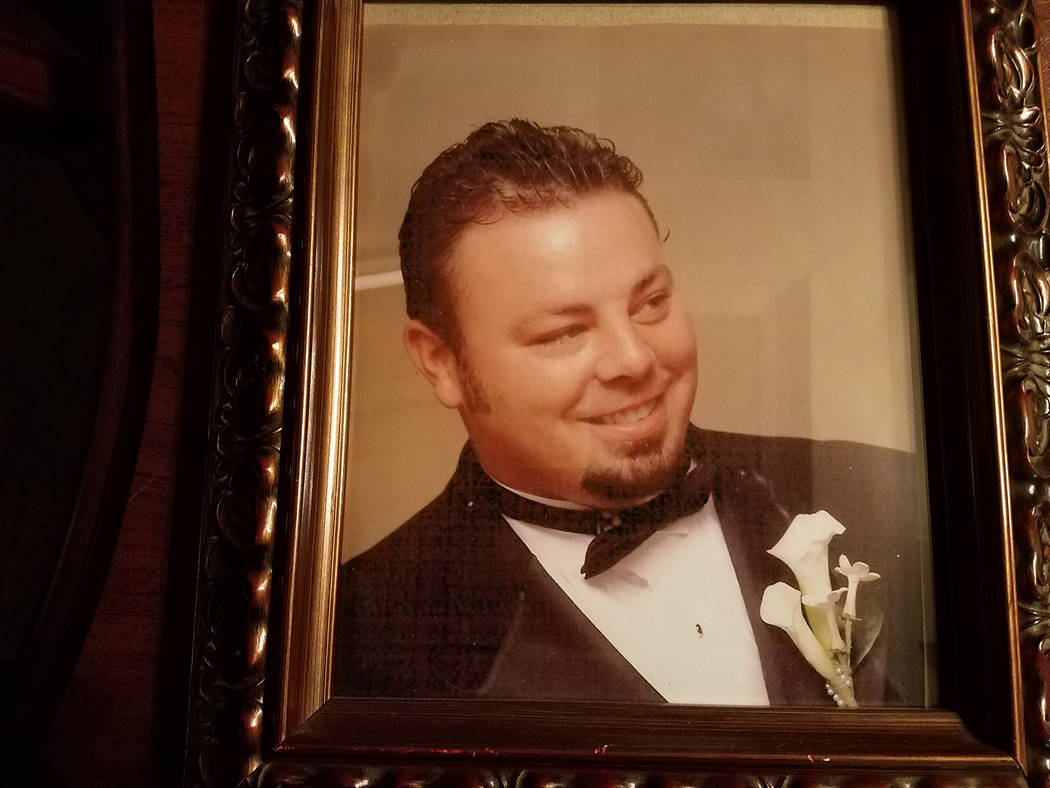 Special to the Pahrump Valley Times Jeremy Moon wanted to visit an ailing family member in Pahrump during the 2006 Thanksgiving holiday. He was killed on Thanksgiving morning in a head-on collision on Nov. 23, along Homestead Road. His wife and cousin were seriously injured in the crash. 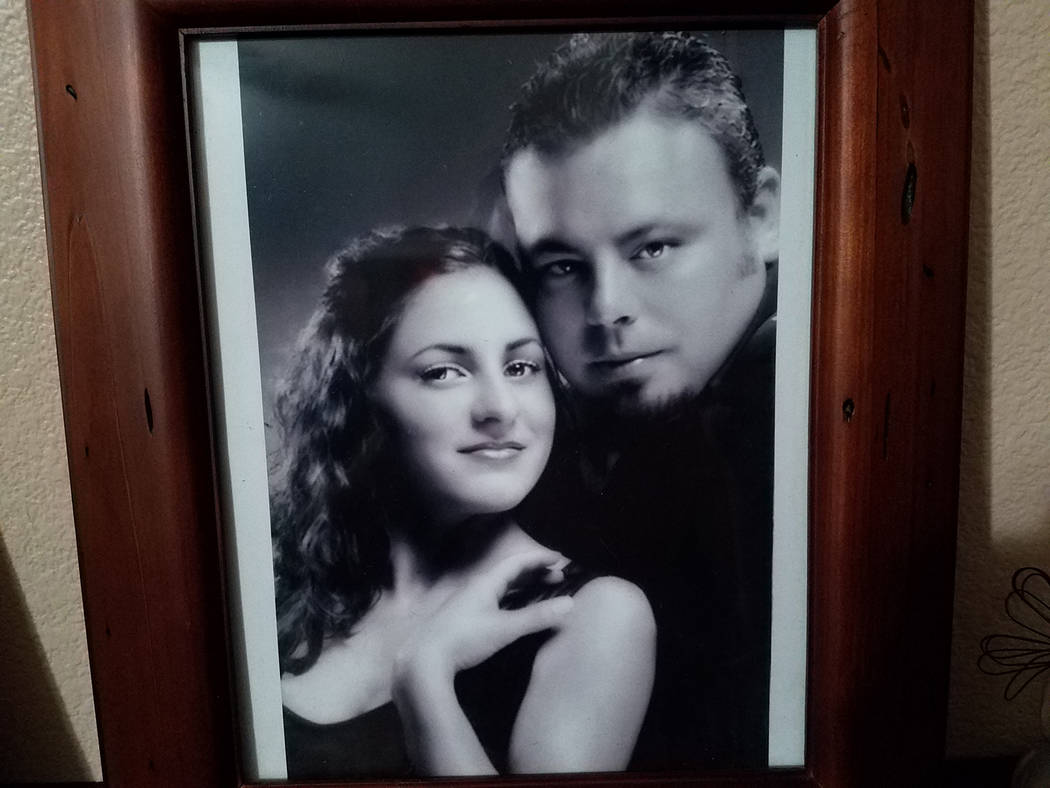 Special to the Pahrump Valley Times Anna Moon has never dated or remarried since her husband Jeremy's death 12 years ago. Both would have celebrated their 14th wedding anniversary on October 23, of this year. At the time, both were proud new parents of their 11 month-old son, Ian Michael Moon. 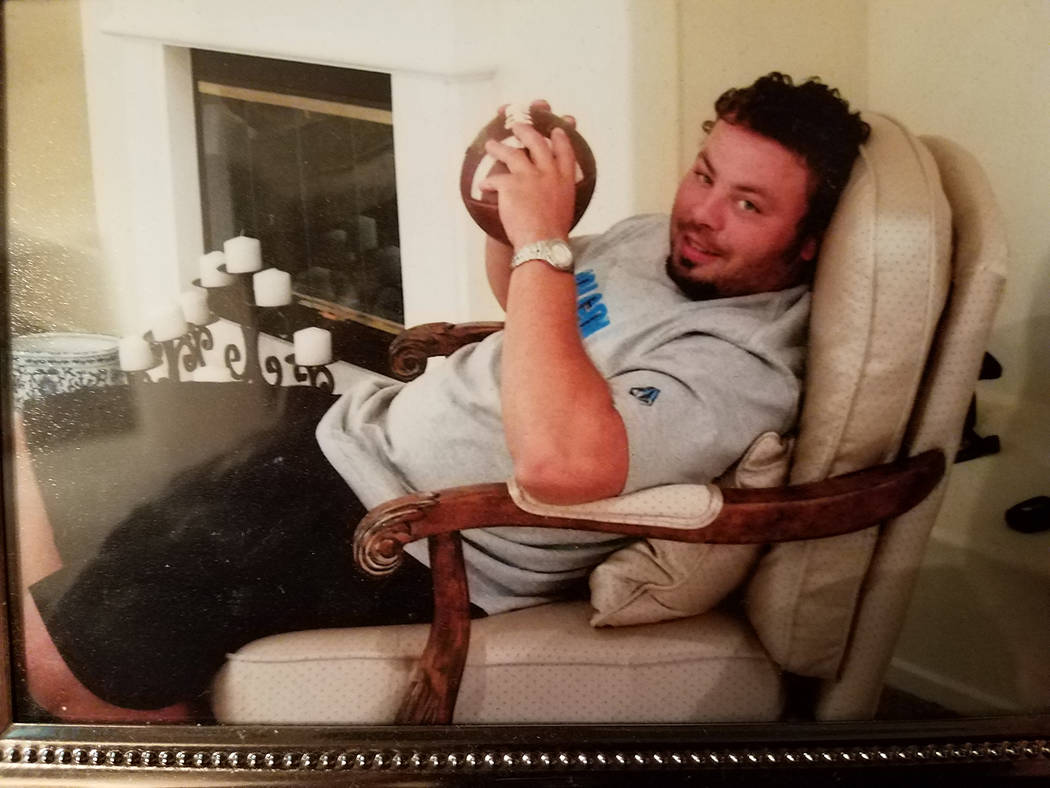 Special to the Pahrump Valley Times In the late 90's Jeremy Moon wrestled and played varsity football during his time at Etiwanda High School in southern California. At the time of his death, Moon worked at his family’s business where he was preparing to become the company’s Chief Operating Officer back in 2006. 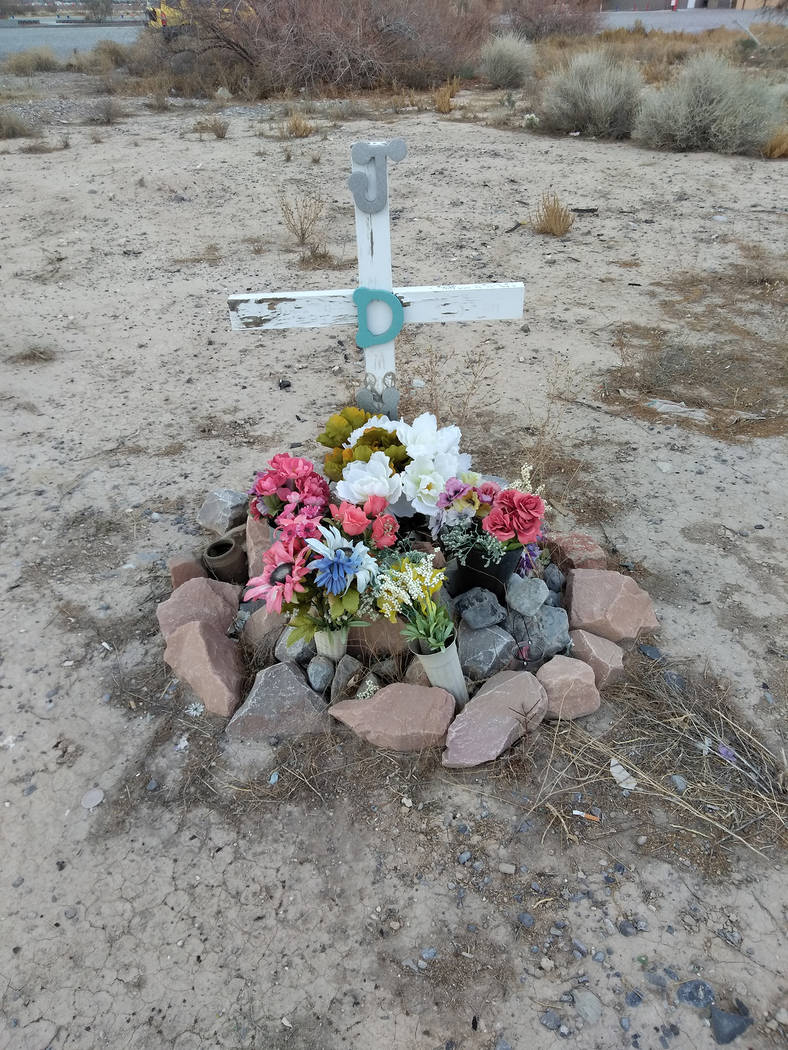 The man who caused a head-on collision, killing one person and altering the paths of numerous lives, 12 years ago is out of prison.

The tragic incident occurring on Nov. 23, 2006, began as a simple trip to the store.

It was Thanksgiving Day when Southern California resident Jeremy Moon, 27, his wife Anna, and cousin Crystal were en route to Walmart on Highway 160 in Pahrump to pick up some much-needed necessities after arriving in Pahrump from Corona, California.

Moon, who would now be 38, and his wife were in town to celebrate Thanksgiving with Pahrump family members, when tragedy struck.

While driving up Homestead Road toward Highway 160, Jeremy’s car was struck head-on by a vehicle traveling in the opposite direction.

Behind the wheel of that vehicle was Pahrump resident and manufactured home business owner David Cleveland, who was intoxicated.

The resulting high-impact collision killed Moon, while seriously injuring his wife and cousin.

The investigation by Nye County Sheriff’s deputies concluded that Cleveland was driving under the influence at the time.

Cleveland, who initially sought to fight the charges, ultimately entered a guilty plea on Jan 14, 2008.

Though prosecutors recommended eight to 20 years in prison, along with restitution amounting to $181,970, Moon’s family still grieves their loss, as Cleveland is now a free man.

Cleveland’s emancipation did not sit well with Moon’s family, as they were counting on him to serve the maximum term.

He was released from the Northern Nevada Correctional Center following a parole board hearing in Las Vegas on Feb. 8 of this year.

He was officially set free on Feb. 22.

It is unknown whether he is residing in the Pahrump area.

Jeremy’s father, Eldon Moon, also a California resident, spoke about his son’s decision to visit an ailing family member in Pahrump during the 2006 Thanksgiving holiday.

At the time, Jeremy and Anna were the proud new parents of their 11-month-old son, Ian Michael Moon.

The main purpose for the trip to Walmart was to purchase diapers for their infant son.

“Jeremy broke tradition by taking his family to Pahrump to see his grandmother, so that his son Ian could see his great-grandmother, who was diagnosed with Alzheimer’s disease,” he said. “He did that so she could have some good memories with her great-grandson. Jeremy just wanted to do the right thing by his family. On that morning, they were on their way to Walmart to get diapers for Ian.”

Even though it’s been more than a decade since the fatal crash, Moon said the injuries sustained by his daughter-in-law and niece still affect both women.

“Jeremy’s wife Anna still has to make regular visits to the doctor,” he said. “She also lost a kidney. She has trouble with her back as well as having internal and psychological problems. Crystal, who had her arm shattered, has 26 screws and a big steel plate in her arm. She can’t even lift her kids for any length of time or even hold groceries. This poor girl is going to struggle for the rest of her life with things that most of us take for granted, where we need to simply pick something up or perform a simple task. She can’t do the things that she used to do and she will always have this handicap for the rest of her life.”

When Moon spoke about his grandson Ian, who is approaching 13 years old, he could not hold back his tears when thinking about “what could have been.”

At the time of his death, his son worked at the family’s business in Corona, California, where he was preparing to become the company’s chief operating officer.

“Ian lives every day without having a daddy, but he talks about his daddy all the time.” his father said. “He’s now growing up without having someone to play catch with and without being able to show his dad his good grades on his report card. We try to give him all of the information that we can about his daddy. Ian is a great kid, and Anna has done a wonderful job raising him by herself. He just lacks having a daddy, and you can obviously tell.”

Additionally, Moon made certain to note how much his grandson favors Jeremy in terms of physical appearance.

“Ian physically looks just like his daddy, even his characteristics,” he said. “It’s amazing because my wife actually took pictures of Ian and compared them with Jeremy when he was a child. Not only are they almost physically identical, Ian truly does the same things that his daddy did at that age. He does it without his daddy even being there. It is very special to watch. I have a very strong personality and I think that Ian misses a strong personality in his life. Jeremy was a very big and very strong man personality-wise, as well as physically.”

Moon also talked about the sheer devotion his daughter-in-law Anna still has for her deceased husband.

They would have celebrated their 14th wedding anniversary in October of this year.

“Since Jeremy’s passing, Anna has never dated and never remarried,” Moon said. “Jeremy was her soulmate and she lost him. She just lives life by herself and she raises her son by herself. It’s a very difficult task, which she has been able to master so gracefully. It just makes you think how much easier life would be if she had Jeremy here. It’s a really tough deal for her. Ian, meanwhile, sees all of the other kids in school with their daddy, but he doesn’t get to have that.”

Regarding last month’s parole board hearing, Moon did not mince words about the outcome, as Cleveland was present via videoconference, alongside a retired priest.

Moon noted that an apology uttered by Cleveland lacked sincerity and responsibility for the crimes.

He noted that Cleveland tried to place blame on the vehicle he was driving at the time of the collision.

“David Cleveland spoke first and said that he wanted to apologize to my family that Chrysler was not there to take blame for an inferior product,” Moon recounted.

Additionally, Moon noted that Cleveland, technically is not out on parole.

“He was denied parole until February 2021,” he said. “It means that he is going to be under house confinement, where he still has some privileges but there are also some restrictions on him. The correctional facility has nothing to do with parole. So the corrections has released him and he is still under house arrest. He wears an ankle bracelet and the way I understand it, he is also able to go to work, go to the doctor’s office or even the grocery store.”

Moon also claimed that Cleveland has yet to pay any of the restitution levied by Nye County Fifth Judicial District Judge Robert Lane, who presided over the case.

That claim has not been verified.

The Pahrump Valley Times was continuing to seek information.

Though an old adage states that “time heals all wounds,” Moon wasn’t quite ready to totally concede to the axiom, 12 years after his son’s death.

“In some ways, yes it does, but it doesn’t ease the pain,” he said. “It teaches you to talk about it on a lighter level and try not to give it much depth, otherwise you are going to break down every time you talk about it. Personally, it’s like living life without an arm because my son was an extension of me. For me personally, I feel like I am living without a part of me. I don’t feel whole without my son.”

Additionally, Moon spoke about how the tragedy affects Thanksgiving Day celebrations for his family each year.

He said it was not the day itself, but the actual date each November, when the family observes Jeremy’s passing.

A roadside marker still stands where the collision occurred in front of Pahrump’s VFW Post on Homestead Road.

Though the marker is regularly maintained, it is not Moon who does it.

“We still have family there and we probably need to go there more often, but we choose to avoid traveling to Pahrump,” he said. “My niece Crystal keeps up the roadside marker religiously. It’s nothing against the people there but I just don’t like going to Pahrump because it’s just too difficult.

“When you go to Pahrump you just can’t help but think that’s where Jeremy died. Going to the site and thinking of seeing your son’s body laying there lifeless is just unbearable. It’s really tough. My nephew recently purchased the house in Pahrump and I was there just to see him about three months ago.”

This is a developing story. Check the Pahrump Valley Times and pvtimes.com for update.