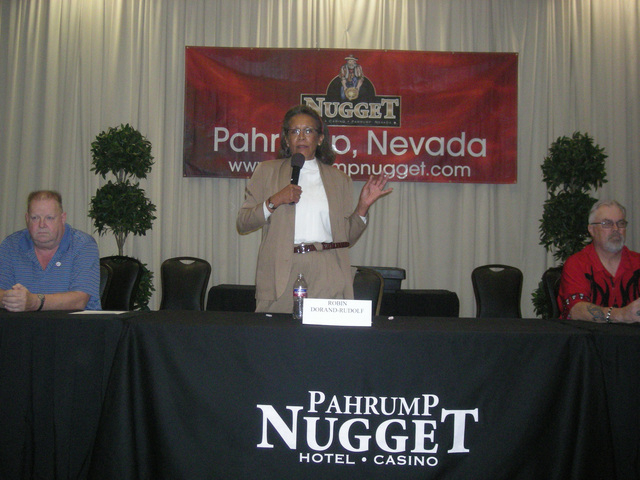 “The current public administrator is practically an absentee administrator. I don’t have another job. I have the resources, I have the time and I am willing to dedicate myself to full-time service in this position,” Dorand-Rudolf said.

She wants to make sure deputy public administrators have cameras and keep a receipt when they enter properties where there is an unattended death.

“I just had a very big wake-up call that let me know I don’t know enough about the judicial system,” Dorand-Rudolf said. “I will never go into court again without a document that’s not prepared by a lawyer.”

Her opponent, Bob Pilkington, owner of My Paralegal, said he prepared all the legal documents for the public administrator’s office from 2006 to 2010 when there was accountability.

“The probates were done correctly, there were no complaints. There was nothing bad that came out of that office. I was let go and basically terminated in mid-2010 and that’s when it all started. Next thing you know there’s no documentation of goods. The goods are in the public administrator’s office,” Pilkington said.

He said the public administrator shouldn’t go to the judge all of a sudden with $44,000 in expenses after four years in probate court with no documentation.

Pilkington said he’d prepare a handbook for deputy administrators to use and added probate cases are easy to do. He advocated using helmet cams, cameras and having two people at the site of an estate.

“That way there’s none of this hocus pocus of where’d all the money go, where’d the jewelry go, why don’t we have documentation? We don’t have nothing. At this point in time the Nye County public administrator and the deputies make a lot of money and I don’t understand how that amount of money can be made with the estates they’re supposed to be protecting,” Pilkington said.

Dorand-Rudolf said public administrators can be called 24 hours per day, seven days per week. They are paid 4 percent of the value of the estate for the first $15,000, then 3 percent of the next $85,000 and 2 percent for an estate over $100,000 but it can take six months to a year to liquidate an estate and get paid. County commissioners approved a price list where they can bill for phone calls, copies, travel expenses and mileage, she said.

“Our first job is to secure the property. If there are pharmaceuticals, prescription drugs in the house, those things are bagged. If there are weapons, an amount of cash or jewelry or something people could remove from that property we remove that as well. The next thing we do is we try to figure out the next of kin, who the deceased person belongs to. In a perfect world, everyone would die surrounded by their family members and their loved ones. But more often than not that is not the case.,” Dorand-Rudolf said. “We also do an inventory of the assets. Once the next of kin has been notified, mostly they choose to come here, we show them the items that have been secured, we try to explain the probate process to the best our of our ability.”

Pilkington said he would, to quote a Hercules saga, “go in there and clean the horse stables with a fire hose.”

The third candidate, slot technician Butch Dole, said he had planned to run for assessor but there were more qualified people running for that office.

“We need to have an honest office here and the other thing we need to do is maybe look at making this a paid position, so there’s not so much temptation as there has been in the past,” Dole said. “Not a lot of people can go out and do this job without getting a paycheck so they need to get something sold or done in quite a hurry and maybe that’s not good for the people who are actually the heirs.”

Dorand-Rudolf said public administrators in counties over 100,000 population receive salaries. County commissioners recently talked about a bill draft request in the 2015 state Legislature to extend that to Nye County. Pilkington didn’t think it would make the office more honest.

“Nobody in the office will use any relatives, first cousins, second cousins, people with even the last name,” Pilkington said.

Dorand-Rudolf said, “this is the first time Bob and I totally agreed on something. The rotation of the attorneys, the rotation of the legal experts, is exactly what needs to happen and for me it does happen, it’s happening now and those things will be continued.”

Dole said in his former business when he dealt with the Internal Revenue Service he had to make sure he had receipts to prove what he claimed. He formerly ran a package delivery service in San Jose, Calif., shipping silicon wafers to semiconductor companies.

“A great deal of honesty is involved and if you can’t be honest, maybe you shouldn’t even be in this office,” he said.