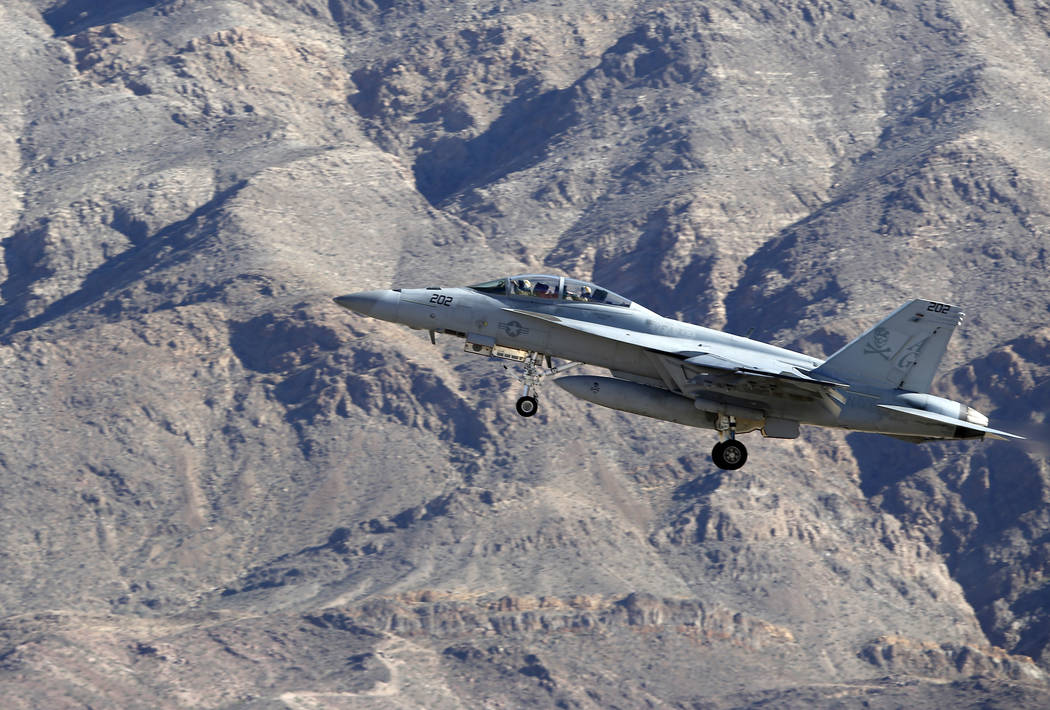 Christian K. Lee/Las Vegas Review-Journal An example of an F/A-18 Super Hornet. This file photo shows it preparing to land at Nellis Air Force Base during the 2017 second Red Flag air combat exercise in Las Vegas.

A Navy fighter jet crashed Wednesday at Death Valley National Park during training, killing the pilot and causing minor injuries to seven people on the ground.

The aircraft was on a routine training flight when the crash occurred north of Naval Air Weapons Station China Lake about 10 a.m. Wednesday, the Navy said. “The Navy has confirmed that the pilot of the FA-18E died in the crash. In accordance with DoD (Department of Defense) policy, the identity of the pilot will be withheld 24 hours,” the Navy said Thursday on Twitter. “The Navy mourns the loss of one of our own and our thoughts go out to the family and friends affected by this tragedy.”

An investigation is underway. The fighter jet was identified as an F/A-18E Super Hornet, a single-seat aircraft. It was from strike fighter squadron VFA-151, known as the Vigilantes, and based at Naval Air Station Lemoore in California. It was flying with a second Navy fighter when the crash occurred. The second fighter jet returned safely.

Patrick Taylor, a spokesman for Death Valley National Park, told ABC News that the park received a report from the Panamint Springs Resort that a military plane had crashed on the west side of Death Valley near Father Crowley Overlook in an area known as Star Wars Canyon, ABC reported.

The canyon — more than 5 miles long and up to 5,000 feet wide — is about a three-hour drive northeast of Los Angeles, off California Highway 190, the Los Angeles Times reported in a May 2019 feature story. Taylor told the LA Times for the story that the Air Force and Navy have used “Star Wars Canyon” as a training area since World War II, long before it became part of the national park in 1994.

“Most of the aircraft that pass through come from nearby bases such as Naval Air Weapons Station China Lake, Naval Air Station Lemoore, Edwards Air Force Base, Fresno Air National Guard Base and Nellis Air Force Base in Nevada. Foreign allied forces are also known to make flybys,” the newspaper stated.

KABC-TV reported that the seven who were injured were tourists from France and all part of the same family. “They were at an overlook checking out the view of the canyon, and say they didn’t even know the military used the area,” KABC said. “Most of them suffered nicks, cuts and burns when they were hit with shrapnel from the crash. One member of the group was more seriously injured with burn injuries on her back and was being taken to a Los Angeles-area hospital for treatment.”