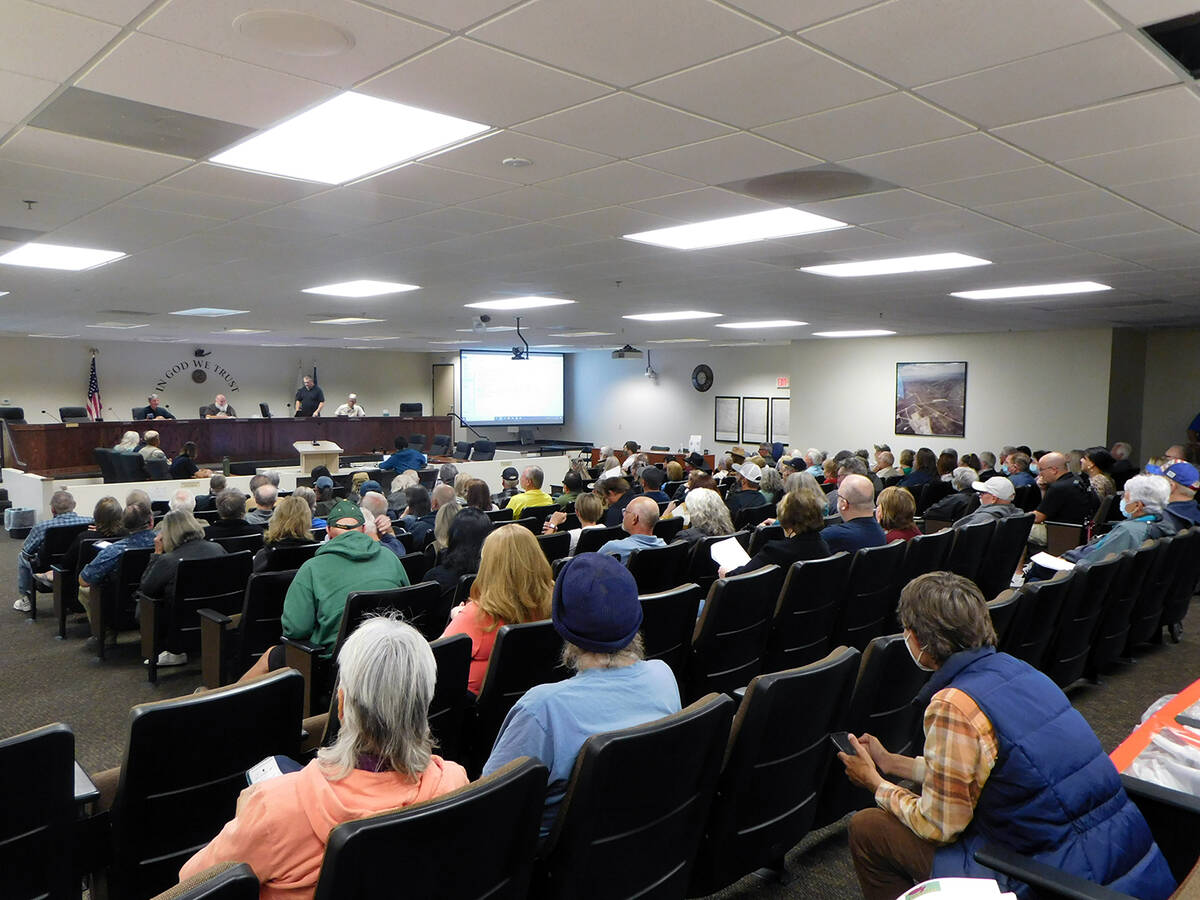 Robin Hebrock/Pahrump Valley Times This photo, taken at the Pahrump Public Lands Advisory Committee's Nov. 9 meeting, shows the hundred-plus community members who showed up to voice their opposition to the proposed Rough Hat Nye County Solar Project. The PLAC will be deciding on its recommendations to the Nye County Commission during a meeting on Nov. 30.

That all changed in October, however, when local residents and even those in other communities got wind of several solar farms proposed for Bureau of Land Management lands located in the southeastern portion of the Pahrump Valley and began to prepare for a fierce fight against the potentiality.

The Rough Hat Nye County solar project is just one of these proposed solar fields but as the company that is proposing it, Candela Renewables, is actively conducting community outreach and presenting its plans publicly, it is now bearing the brunt of the angst generated by the concept of thousands of acres of public lands being cordoned off for the purpose of creating massive solar farms.

The Rough Hat Nye project targets about 3,000 acres of BLM land that border the far southern and eastern parts of town and would be located within just 0.15 miles of Hafen Elementary School and approximately 1,000 feet from many homes in the area.

The Pahrump Public Lands Advisory Committee, more commonly referred to as PLAC, first took up the topic of the Rough Hat Nye County solar project at its Oct. 12 meeting, which saw the largest crowd the committee had ever witnessed up to that point.

Dozens of people turned out for that meeting, many of whom made their opposition to the project a matter of public record, with a wide array of worries voiced by those speaking during public comment.

There were those who aired their disquiet about the effect that a large-scale solar field could have on the environment and public health, others who spoke about the impact that such a project would have on recreation in an area that is well-known as one of the best places for off-highway and equestrian riding and still others who expressed fear that their housing values would plummet as a result of being located so near to a solar field.

Not to be outdone by the Oct. 12 meeting, the PLAC’s Nov. 9 meeting saw an even larger throng, with the Nye County Commission Chambers packed with people eager to let officials know that they will not stand for what is being proposed. Once again, meeting attendees voiced their concerns en masse, giving PLAC members plenty to consider when it comes to the recommendations that the committee will make to the Nye County Commission.

Just what those recommendations will be is unknown but it won’t be long before the public knows precisely what stance the PLAC has assumed when it comes to the Rough Hat Nye County solar project in particular. The committee has a special meeting set for Tuesday, Nov. 30 at which the members will discuss their ideas and suggestions and collate them into a formal recommendation, which is expected to be presented to the Nye County Commission during its Thursday, Dec. 16 meeting.

The Nov. 30 PLAC meeting will take place at 5 p.m. at the Nye County Commission Chambers, 2100 E. Walt Williams Drive, in Pahrump. An agenda for that meeting can be found online by visiting www.pahrumpnv.org and clicking on “Advisory Committees” in the “Government” drop-down menu.

Previous coverage of the discussion at the prior two meetings can be found online at www.pvtimes.com