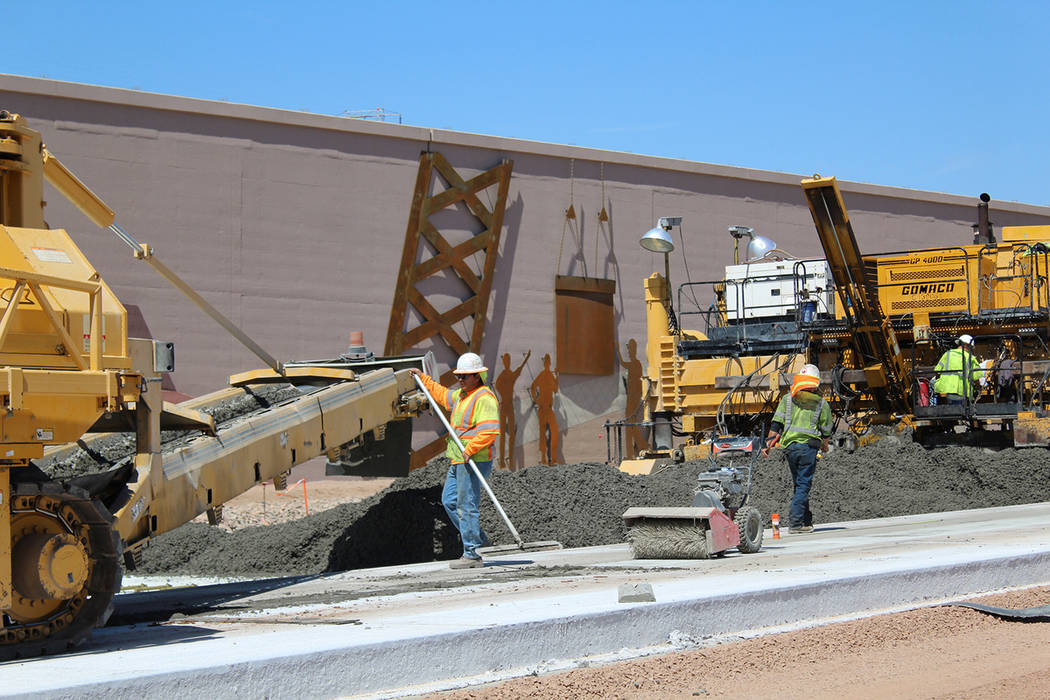 Nevada Department of Transportation This 2017 photo shows construction continuing on Interstate 11 near Boulder City as another segment was being prepared to open to the public. Efforts are underway to plan for expansion of the interstate to help link southern and northern Nevada. 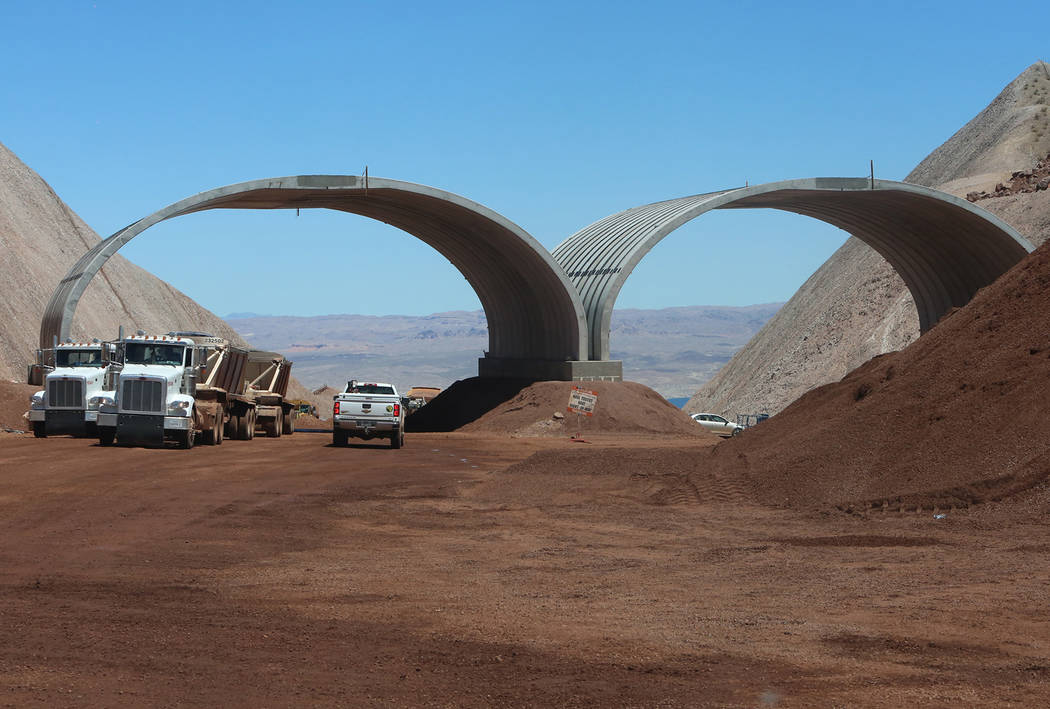 Bizuayehu Tesfaye/Las Vegas Review-Journal The new dedicated desert bighorn sheep overpass on the construction site of I-11, near Lake Mead on Friday, May 19, 2017, in Boulder City. Construction of the first 15 miles of I-11, which will help link Las Vegas to Phoenix, is making progress. 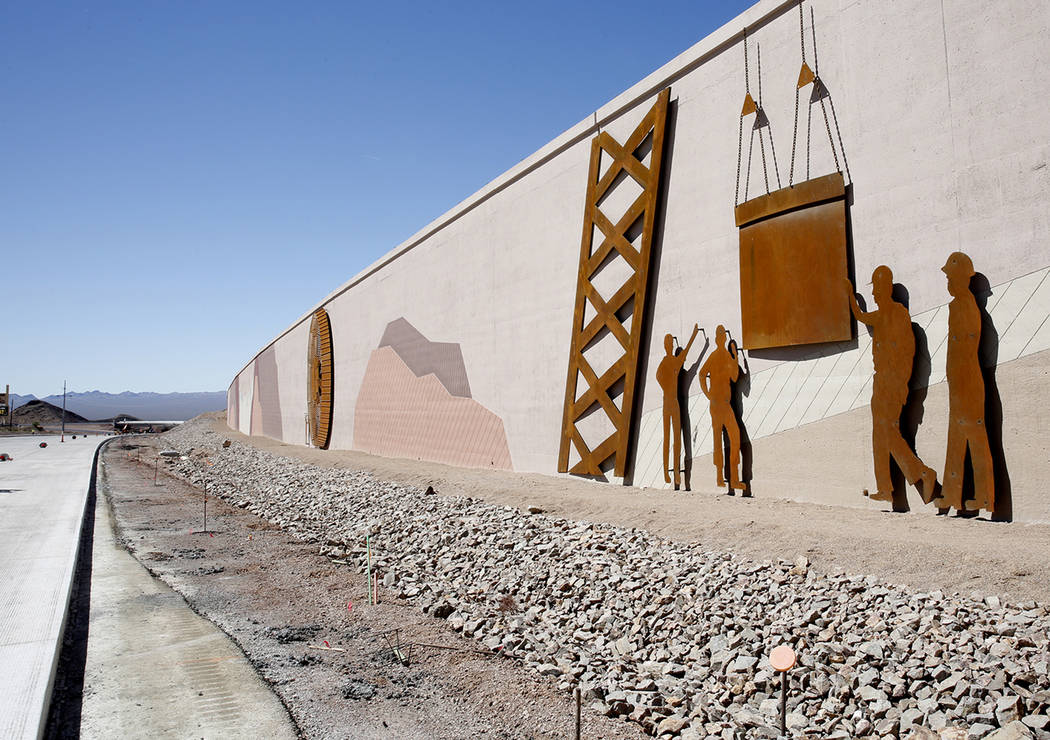 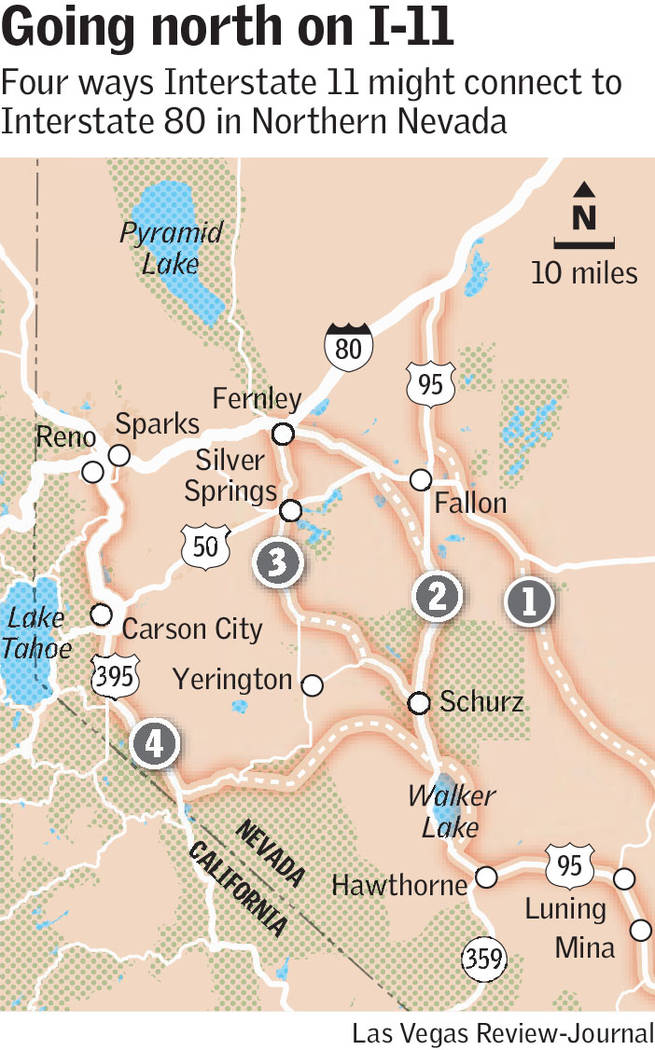 Jeffrey Meehan/Times-Bonanza & Goldfield News City and county officials from Clark, Nye and other rural counties in Nevada, along with members of the public, learn about four alternative routes in Northern Nevada for Interstate 11 at Santa Fe Station in Las Vegas on March 20, 2018. More than 40 people attended the informational event that included time for citizens to engage Nevada Department of Transportation officials with questions and concerns. 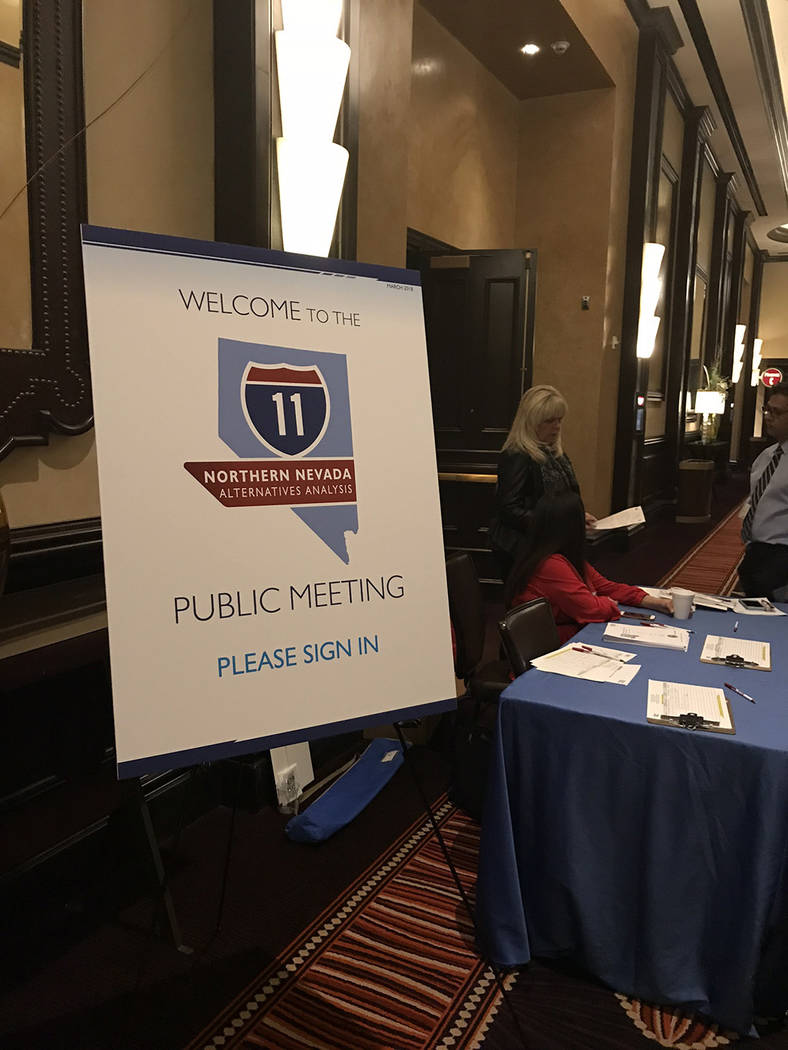 Jeffrey Meehan/Times-Bonanza & Goldfield News Nevada Department of Transportation officials hold a meeting on March 20, 2018 on the northern portion of Interstate 11, which includes Tonopah, Beatty and Indian Springs, along with other portions of the state. NDOT officials traveled traveled to six cities and towns in Southern and Northern Nevada at the end of March. 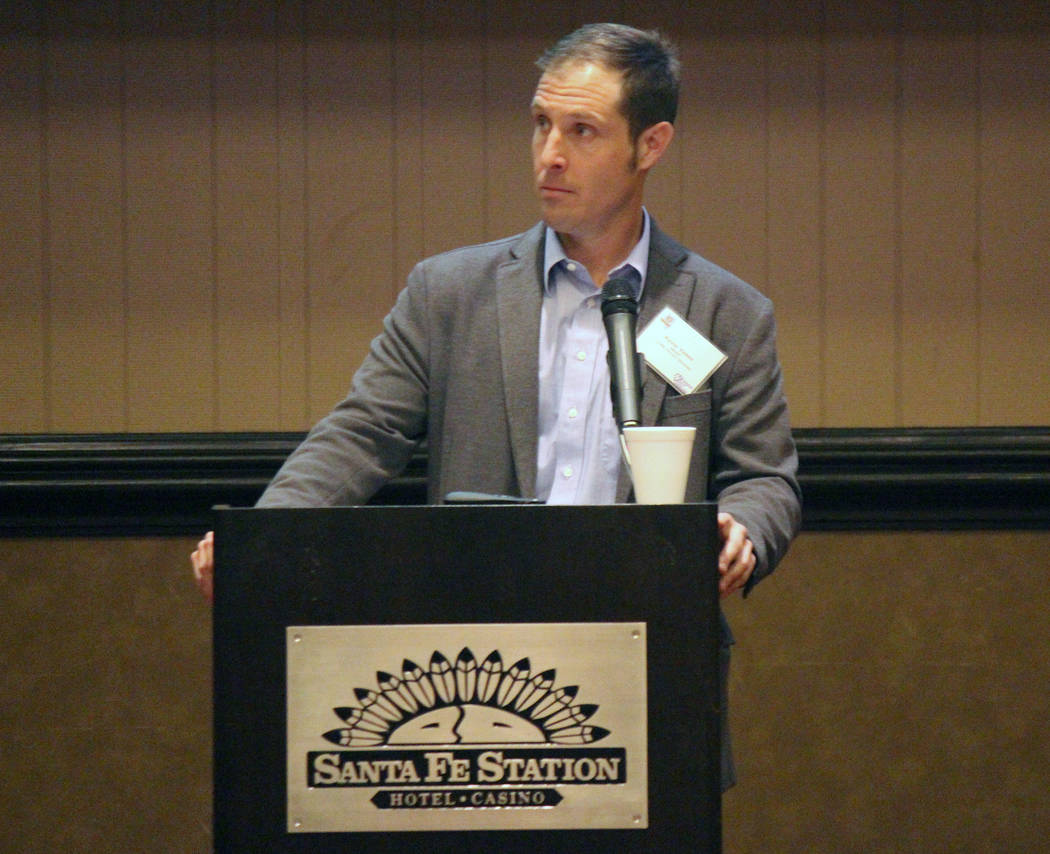 Jeffrey Meehan/Times-Bonanza & Goldfield News Transportation planning analyst Kevin Verre from the Nevada Department of Transportation speaks about the future of Interstate 11 and its path from Las Vegas to Interstate 80 at the Santa Fe Station in Las Vegas on March 20, 2018. I-11 is set to trace some parts of U.S. Highway 95 as it makes its way through several parts of Nye County: Beatty, Indian Springs and Tonopah are just a few.

An analysis of potential routes that will run through the northern half of Nevada, between Las Vegas and Interstate 80, for the long-discussed Interstate 11 project is underway.

Though most of Nevada will be affected by the future four-lane divided highway system, towns from Indian Springs to Beatty and Tonopah, and beyond, could see changes in how motorists and truckers find their way to local attractions and amenities.

Transportation planning analyst Kevin Verre from the Nevada Department of Transportation spoke to a room of about 50 people at the Santa Fe Station at the end of March about four potential routes being considered in the western half of the state that the I-11 could run through one day.

Verre said the analysis, the I-11 Northern Nevada Alternatives Analysis, is the early stages of what could be a long road to laying asphalt between Las Vegas and Interstate 80 in Northern Nevada.

Verre explained the routes in two segments: Segment A, which runs from Las Vegas to Tonopah; and Segment B, where there are four alternatives to be considered in the process.

Those alternatives are set to use existing portions and the creation of new portions of highway, up to Interstate 80. The alternatives include a route from Tonopah and heading through Salt Wells, one that could head through Fallon from Tonopah, a route that runs through Silver Springs and Fernley, or a road that connects to Reno and heads north to I-80. NDOT officials traveled the state to six spots, gaining public comment and introducing the alternatives to citizens around Nevada.

Presentations started in Las Vegas on March 20, heading to Tonopah the next day. Other towns and cities visited between March 20-28 included Hawthorne, Fallon, Reno/Sparks and Carson City.

Public comment is open until April 13. For information, contact the Nevada Department of Transportation project manager at 775-888-7712 or KVerre@dot.nv.gov 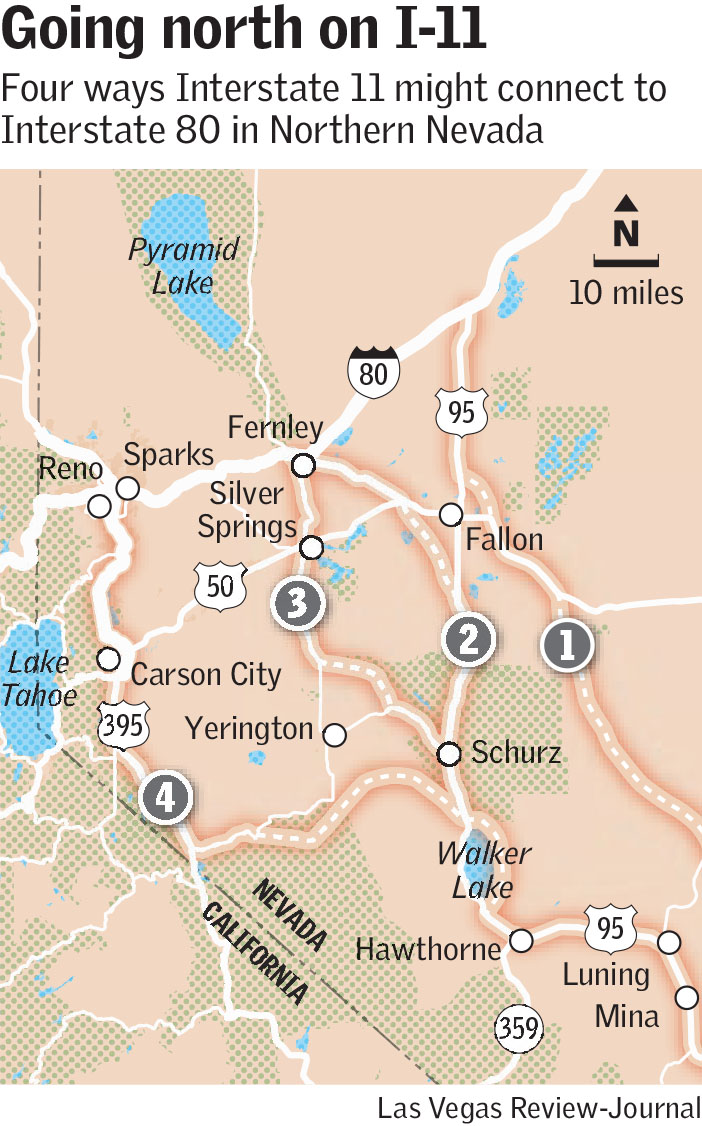 I-11 has roots in the U.S. wanting to increase trade between Canada, Mexico and the U.S.

In 1995, Congress defined the Canamex Corridor in its National Highway Systems Designation Act, a joint effort between Nevada, Arizona, Idaho, Utah and Montana.

The National Highway bill was signed into law and prompted the development of a continuous four-lane highway between the three countries, to increase trade, according to information on NDOT’s website.

Congress had worked to outline the Canamex route in legislation in the early 90s; and a year before the National Highway Systems bill came into law, the North American Free Trade Agreement came to be.

In 2012, federal legislation created by Congress designated the planned freeway between Las Vegas and Phoenix as the Future I-11. Work on NDOT’s 2.5-mile section of freeway, which stretches from Railroad Pass to U.S. Highway 95, is wrapping up and is expected to be completed in April.

Another 12.5-mile stretch that goes from the intersection of U.S. 95 to U.S. Highway 93 to near the Hoover Dam Bypass Bridge, is expected to come to completion in October. That segment of road is being developed by the Regional Transportation Commission of Southern Nevada.

A study put together by NDOT and the Arizona Department of Transportation in 2014, the Intermountain West Corridor Study, found that the route that runs from the southern part of Arizona to Las Vegas and up through the northwestern portion of the state up to I-80 was the best alternative for its expansion.

The Intermountain West study provided a broad connection between Las Vegas and I-80, according to Verre.

“What we’re doing with this study (Northern Alternatives Analysis) is looking within that: Where are the alternatives to make those connections?” Verre said.

Still, the intricacies of some of the decisions on how the road would actually go through a city or town is somewhat beyond the scope of the process now in motion, he said.

NDOT is working to document “issues, constraints and opportunities in a Planning and Environmental Linkages (PEL) document, to lay the groundwork for future National Environmental Policy Act (NEPA) studies,” according to NDOT’s website.

Next, the process moves into an environmental review, required under NEPA.

Under the current stage, another round of public meetings will likely be announced for June 2018.

The study being put together at this juncture is planned to be completed by the end of summer or early fall, Verre said.

In addition to citizens living in the affected areas, NDOT will be engaging economic development groups, the U.S. Bureau of Land Management, the U.S. Forest Service, tribal communities and other groups.

In the next stage, a more detailed look at specific alignments within the proposed alternatives will be considered. In that stage, a single alignment will be recommended, information on NDOT’s website stated.

“What we’re doing is trying to build a planning study that gives and informs that NEPA process the best we can, so that what we’re doing, to be proactive in the planning process bridges into NEPA fairly seamlessly,” Verre said.

Potential future phases following that include the design roadway improvements, acquiring rights of way and construction.

The process of actually getting the road built could be decades away, according to officials.

But citizens and officials are still getting their comments in early in the process.

“They’re not going to build it for a while, but a lot of the decisions for the routing will be made very quickly,” said Darrell Lacy, director of natural resources and federal facilities for Nye County, who was attending an informational session on I-11 in Las Vegas.

Lacy said it’s important to get comments in early on things such as placement of exits and other vital elements.

“We want to make sure that Tonopah and Beatty aren’t left high and dry,” Lacy said.

Beatty officials were also in attendance at the meeting in Las Vegas on I-11.

Erika Gerling, treasurer for the Beatty Town Advisory Board, voiced concerns that tourism wasn’t one of the nine evaluation criteria for the NDOT study in deciding what route I-11 should take.

Gerling said Ecotourism is a big part of Beatty’s overall tourism plans for the future.

She also engaged Verre during a question-and-answer session at the Las Vegas event in March on where funding was coming from for the study and the planned I-11 project, along with other concerns.

Verre said the money for research comes through NDOT from federal monies. The future of funding for I-11’s construction is unknown at this point, according to Verre.

Finding a funding mechanism has been, and is, in the works by federal regulators.

“As a member of the U.S. Senate Commerce, Science, and Transportation Committee, I’ve have championed bills to advance and fund Interstate-11, which would connect Phoenix and Las Vegas, the only two cities in the nation with populations over 1 million that are not already linked by an interstate,” said Sen. Dean Heller, R-Nevada, in an email.

At the end of 2015, Congress passed the Fixing America’s Surface Transportation Act (FAST), which designated the I-11 as a high-priority corridor. The FAST act was the first long-term highway bill that had passed through Congress in almost a decade at the time.

“With Congress beginning talks on an infrastructure package, I’m going to continue to push for I-11 as well as other federal projects that will help Nevada,” Heller said. “I look forward to working with my colleagues and Department of Transportation Secretary Elaine Chao to fight for federal resources that will support this critical interstate.”