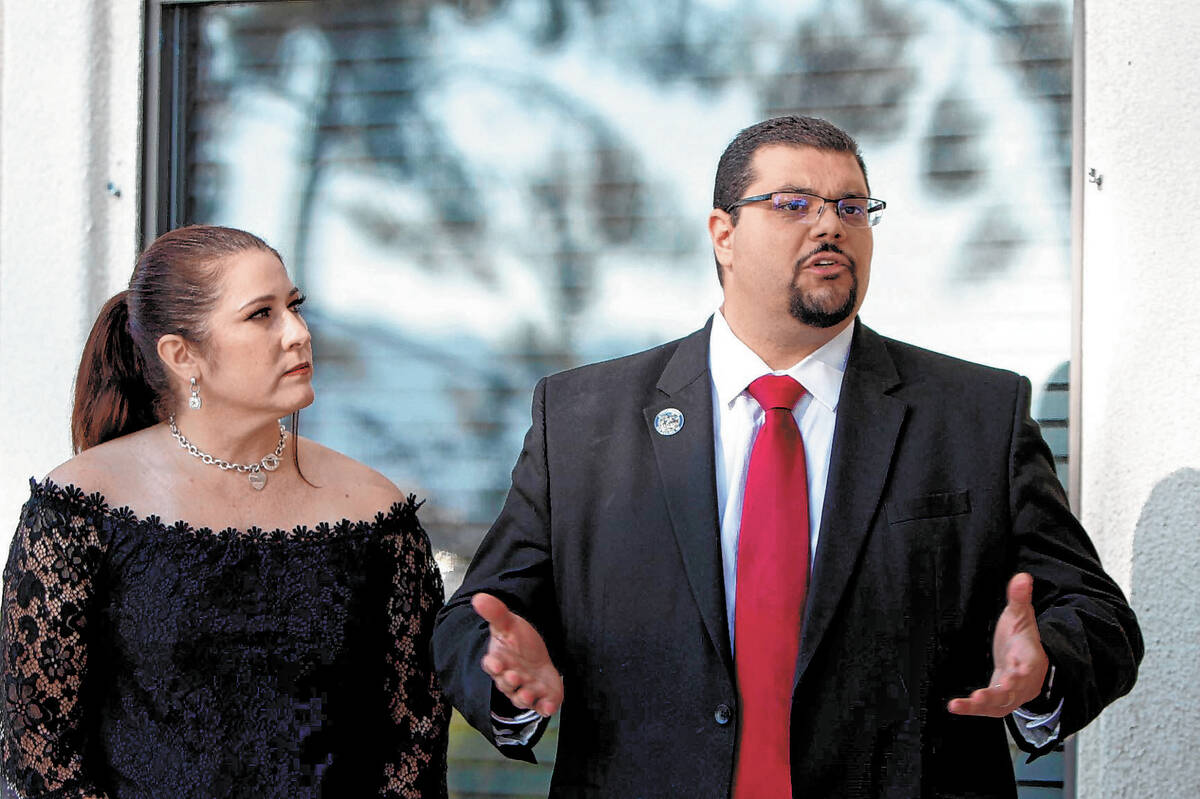 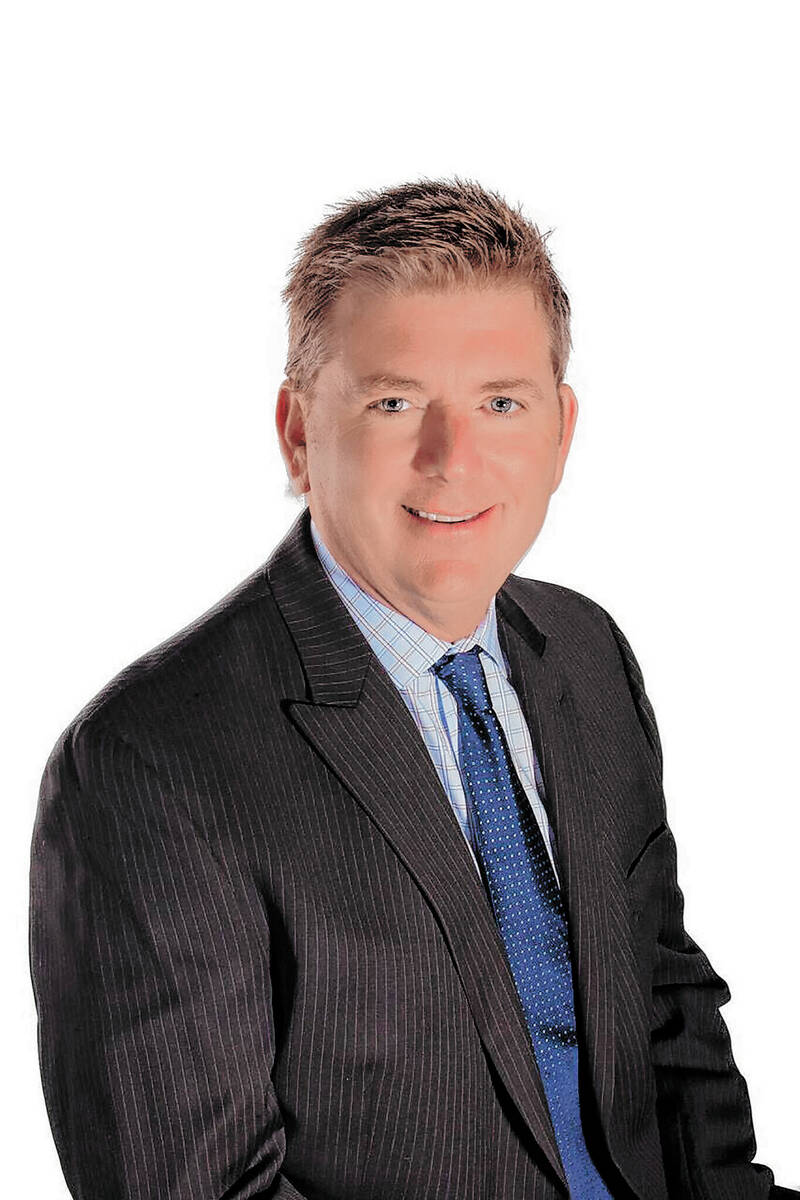 In Republican-dominated Nye County, the political mudslinging came to a fever pitch ahead of Tuesday’s June 14 primary election, where there was fierce competition in the GOP race for District 4 county commissioner between incumbent Leo Blundo and one of his two challengers, businessman Ron Boskovich.

The feud has played out with heavy spending from both on political billboards, attack ads in newspapers and negative messages on online streaming platforms.

At times, the political campaigns have been nasty and personal.

The votes are still being tallied, but on Wednesday morning Boskovich was leading the incumbent with more than 54% of the total vote count. Blundo had 33.8% and Patino Quintero Nurmara had 11.64%. If no candidate receives 51% of the votes in Tuesday’s primary, the top two vote-getters will face off in November’s general election.

In May, Boskovich’s campaign uploaded footage on his YouTube channel called NyeCorruption from deputy body cameras that show the hostile interaction between Leo Blundo and officers who responded to his home at least two times in the past three months to investigate allegations of abuse against his wife.

Blundo can be heard in that footage calling his wife expletives.

Additional body camera footage uploaded to Boskovich’s YouTube channel earlier this month shows a Nye County deputy interviewing Blundo’s wife after he was dispatched to their home again in May. During the recording, Blundo’s wife claimed that the commissioner had hidden secret cameras in their house that captured her naked. She told deputies that the commissioner shared naked images of her on the Internet without her consent, and also used them to entice others to join their “swinger lifestyle.”

Blundo pushed back last week in a full-page ad in the Pahrump Valley Times, singling out Boskovich’s past marriage to Brett Waggoner, the county’s planning director, and referencing shady business deals in which Blundo claims the couple were involved. Blundo took jabs at his opponent’s daughter in the advertisement, before defending himself against Boskovich’s online smear videos.

“My opponent is using these deceptive videos to distract you from the fact that he is a dishonest, Left coast liberal,” Blundo’s advertisment states in part. “We do not take kindly to that woke attitude in Pahrump. My opponent claims that he is running to ‘rid Nye County of corruption.’ Well, I’ll tell you, if he had his way, he would run the county through his pay-for-play family business.”

Boskovich’s campaign erected a billboard near the main polling station in Pahrump that features a headline taken from a critical Las Vegas Review-Journal article that reads: “Leo Blundo accused of choking woman over stolen cash.”

A photo of the commissioner appears prominently on the billboard.

On Tuesday afternoon outside the Bob Ruud Community Center polling station in Pahrump, Blundo had no further comment about the political attacks from his opponent.

Negative campaigning is not unique to rural politics, according to University of Nevada Las Vegas assistant professor Kenneth Miller, who says it represents a dynamic of what’s occurring within each party at a given time.

“There seems to be more [infighting] with Republicans in Nevada, but that’s only because they’re the ones that are having the competitive primaries,” Miller said.“They need to select their nominees to run against these incumbents. The Democratic Party has a bunch of incumbents and so they don’t have these competitive primaries.”

In Nye County’s primary this year, there were little to no Democratic incumbents in local races. Republicans outnumber Democrats here nearly 3-1. But there is a widening rift in the local GOP, as evidenced in the campaigns of local races.

“The divisions that we’re seeing in the Republican Party right now, a lot of that stuff is hinging on this axis of everyone’s trying to position themselves to the Republican base as more in-sync with Trump than their opponent,” Miller said. “This is because the candidates believe that’s the way of building the most effective way to appeal to Republican primary voters.”

That’s happened in the District 4 commission race, where Blundo erected billboards and placed newspaper ads painting Boskovich as a “Never Trumper” in attempts to distinguish his challenger’s brand of conservative politics from that of former President Donald Trump who remains popular among Nye County Republicans.

That’s also been the dynamic in the primary race for Nye County clerk between three Republicans. There was an opening for clerk — who oversees local elections — after longtime Republican incumbent Sandra Merlino announced that she would retire from the position she’s held for more than two decades.

Merlino has cited frustration over calls of widespread voter fraud in the 2020 presidential election. The claims, largely from Republicans, echo those from Trump after his loss to Democrat Joe Biden.

While those claims have no merit, and Merlino has insisted multiple times that widespread fraud is not a threat to democracy, each Republican candidate that aims to replace the clerk has doubled down on their claims of mass voter fraud in the 2020 election and say they plan to ditch electronic voting machines and mail-in ballots in favor of reverting back to hand-counted paper ballots.

“The reality is that campaigns are campaigns, and so we’re gonna have that stuff going on,” Miller said.

A history of mudslinging in America

Political mudslinging in America has been around almost as long as American politics itself.

In 1796, U.S. presidential candidate Alexander Hamilton accused Thomas Jefferson of sleeping with one of his slaves – and the dirty mudslinging set the tone for American politics.

Considered to be one of the dirtiest U.S. political campaigns, the 1828 U.S. presidential election saw incumbent President John Quincy Adams’ supporters calling Andrew Jackson’s mother a prostitute, his wife a whore and Jackson a murderer and a cannibal. Jackson, whose wife died of a heart attack suspected to have been caused by the stress of the mudslinging accusations, went on to become president.

These “smear campaigns” can intensify if a candidate is facing a better-financed opponent, or is trying to unseat an incumbent who already has some name recognition.

The Pahrump Valley Times has rejected a number of paid political advertisements this season that attempted to smear candidates running in this week’s primary.

“Some had to be altered before running on the pages of the PVT and Tonopah Times-Bonanza and Goldfield News,” said Editor Brent Schanding, who added that political advertisements are screened for potential libel and must include certain details and meet publication standards. For instance, he said, the words “paid political advertisement” must appear at the top of the ads and each ad must indicate who has paid for its publication.

Digital ads also must contain website links to the organization or candidate who placed the ad.

“The political season has been ruthless in Nye County,” said Schanding, who added that several letters from readers about the candidates also could not be printed because they were potentially libelous.

Still, it hasn’t tempered the political climate in Nye County.

But do smear campaigns actually work?

Nye County’s election results are expected to be finalized within 10 days.

This is a developing story. Check pvtimes.com for final results from the primary election.