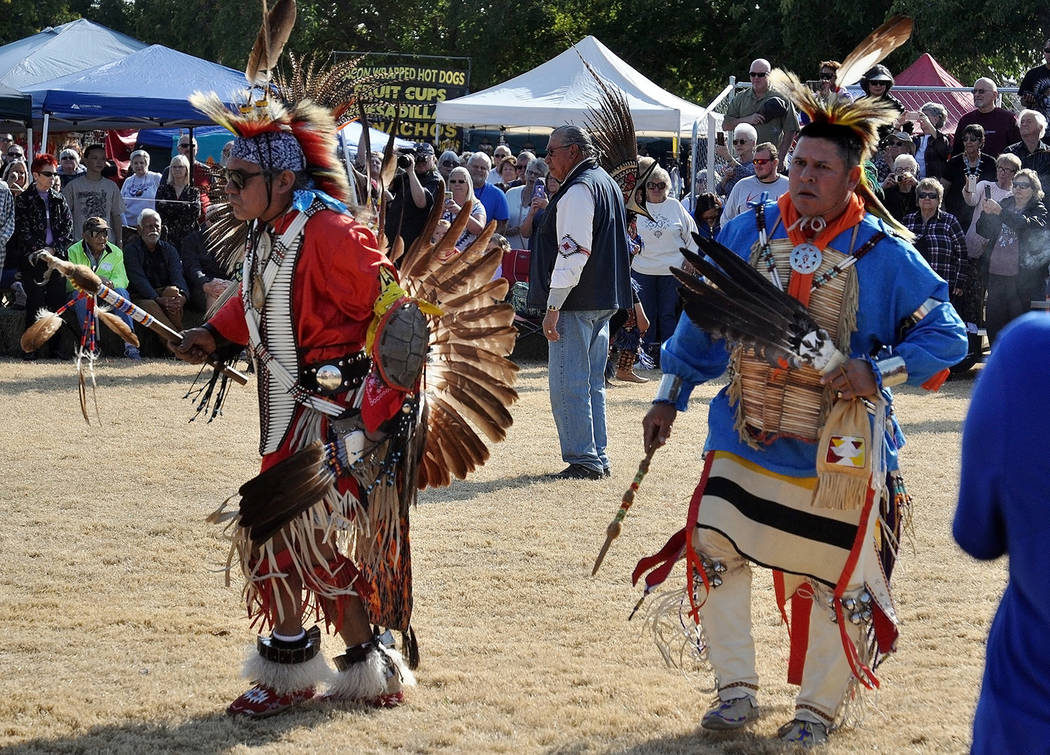 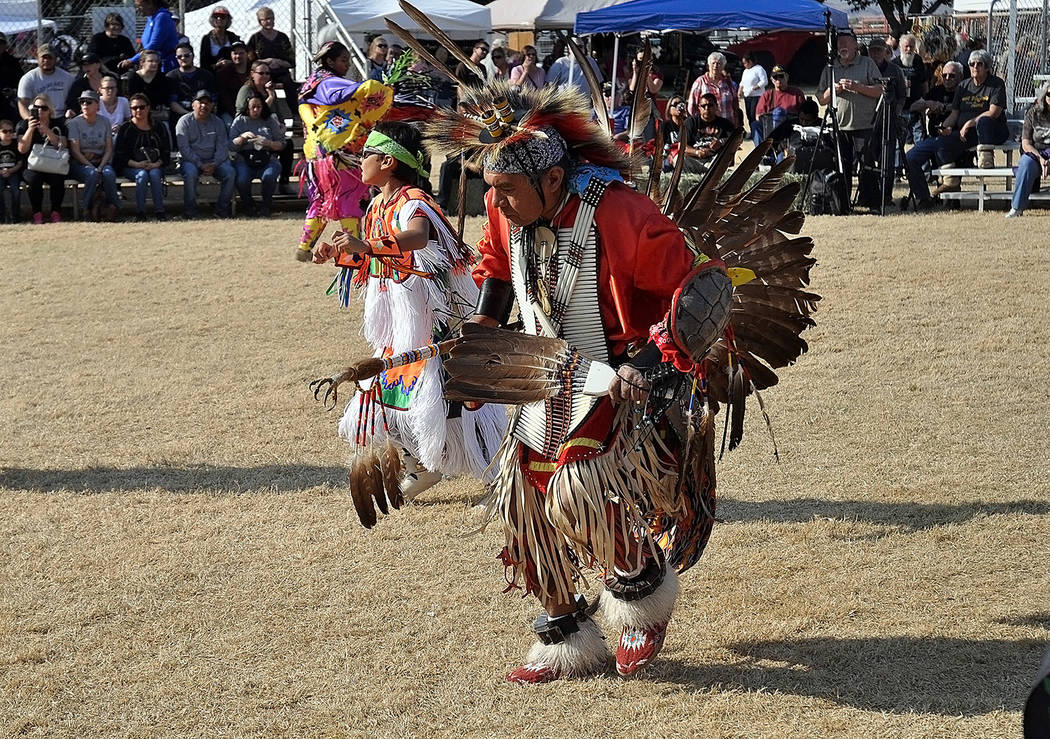 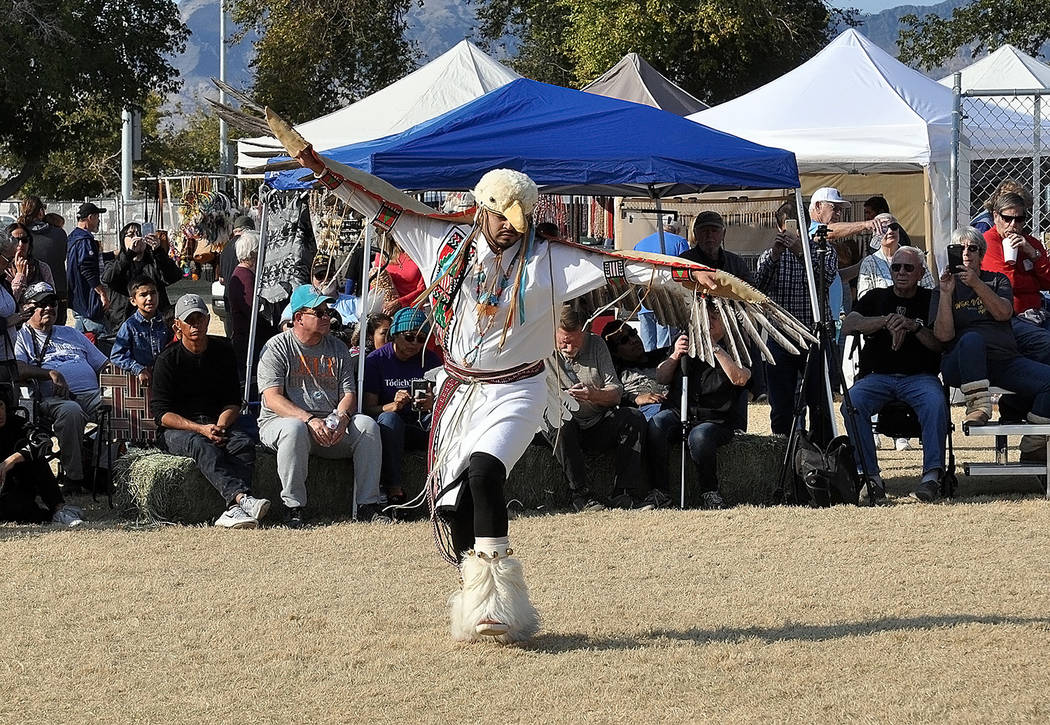 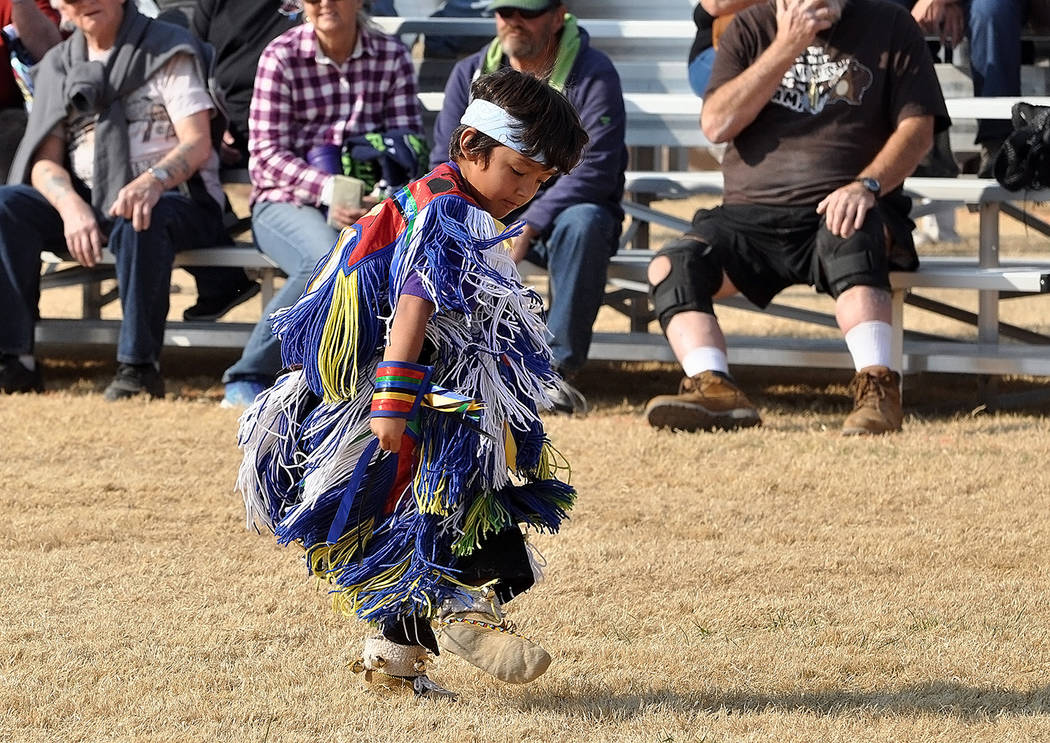 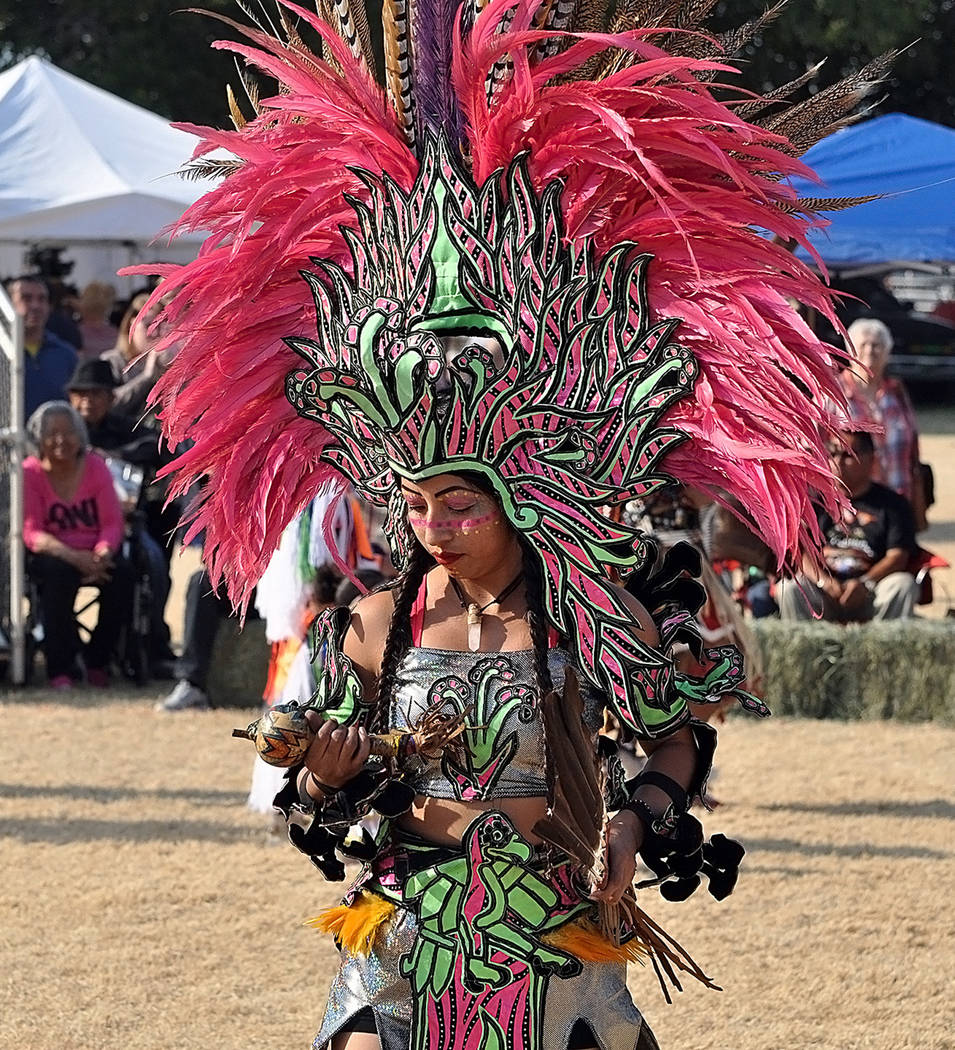 Horace Langford Jr./Pahrump Valley Times An Aztec dancer displays colorful plumes of feathers as she prepares to perform her dance.

The three-day event was founded to create a cultural and educational experience for all peoples through indigenous music, dance, crafts and storytelling.

Additionally, the powwow brought together multiple Native American tribes, featuring gourd and Aztec dancers, along with northern and southern drums, and what’s described as Hummingbird singers.

Hundreds of attendees descended upon the park the Nov. 16-18 special event, which also attracted 32 craft vendors along with multiple food vendors.

“It was amazing and just awesome,” said organizer Paula Elefante. “It was one of the best we’ve ever had. The grand entry was also amazing, and we were honored to have the Nye County Sheriff’s Office Color Guard as part of the grand entry. The people who weren’t in the bleachers or on the hay bales were standing eight deep to witness the grand entry. During the grand entry, the honor guard bears the flag, the tribal elders follow them, then the adults come in, followed by the youth and tiny tots.”

Unlike past powwows, Elefante spoke about a Native American, handmade quilt which was raffled off on Sunday.

“It was made by an Apache woman from Grand Junction, Colorado as part of our 50/50 drawing. We drew the tickets and I was really pleased that it was Sheriff Sharon Wehrly who won the quilt. She also happens to be Cherokee Indian. On Saturday we were really honored to have three senior centers from Las Vegas, who each sent a bus full of seniors. We had also two vans from another senior center from Las Vegas.”

Local resident Ada Foster said she has attended the powwow for more than 10 years.

“I have Native American in my family and I go to powwows wherever I have lived,” she said. “I think it’s very, very nice here. The weather is very pleasant because it’s not too hot and not too cold. I’ve lived here in Pahrump for 11 years, and I have been coming to the powwow for the past 11 years also.”

Another local resident, Jim Bierly, also strolled the grounds, taking in all of the sights and sounds.

“This is the fourth powwow that I’ve been to,” he said. “It’s really nice, and I really enjoy it here. There is so much to see and the food is delicious. People are very nice and it’s nice to witness Native American music and culture.”

Vendor Pete Whitehorse made the trip all the way from New Mexico.

“The name of my business is Whitehorse, and everything I make is cultural, educational, and traditional Native American,” he said. “I always like to educate people toward the culture because a lot of people are ignorant of Native American culture.”

Additionally, Whitehorse made certain to note that he’s been attending the Pahrump powwow for many years.

“This is our 16th year traveling into Nevada from New Mexico,” he said. “The Pahrump powwow is great because there is a lot of people who come and support the community. This is one of the traditions that is still left for the Native American people. They come and buy our products. They show us support and that’s one of the reasons why we are here every year. It’s worth traveling here because we also do a couple of other powwow events on the way here, and we are also going to another one after this. It really makes the trip worthwhile to travel this far.”

Elefante, meanwhile, said she has plans for next year’s event in terms of accommodations for out-of-town visitors.

“I had many people camping in the park with RVs and tents,” she said. “I’m hoping that next year we can come up with a powwow rate with our hotels here in town so that I can push that. I’m hoping to get a set rate for the weekend with the key word being, powwow.”