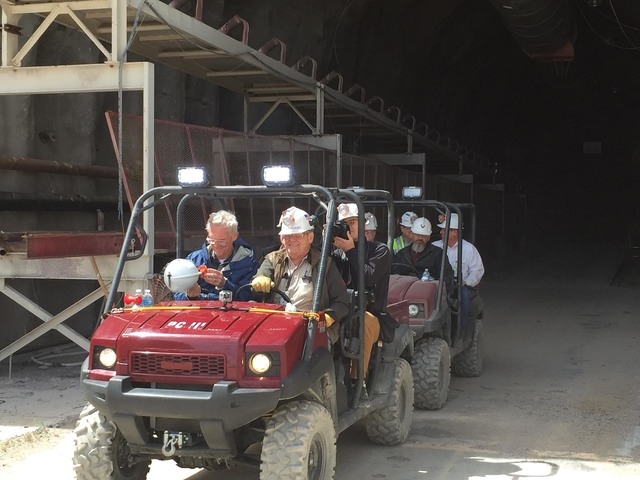 WASHINGTON – A proposal that surfaced in Congress this week aims to spur a revival of the Yucca Mountain project, providing necessary land and water rights to build out the site if federal officials find that nuclear waste can be buried safely inside.

No member of Congress yet has stepped forward to take authorship of the proposal. A one- page summary of key provisions was published Tuesday by Environment &Energy Publishing, and later confirmed.

Sources said limited copies of the legislation itself have been shared on Capitol Hill and at the Department of Energy. Plans for House hearings were tentatively eyed for next week but have been postponed until later this summer.

The provisions appear to track the goals of House Republicans who have insisted that Yucca Mountain be a part of the mix as Congress sets a new strategy to manage the growing inventory of highly radioactive spent nuclear fuel accumulating at commercial power plants.

The site 100 miles northwest of Las Vegas once was the centerpiece of the government’s nuclear waste strategy but it was mothballed in 2010 by President Barack Obama.

Before it was shelved, the Yucca project envisioned storing thousands of canisters of waste in tunnels drilled throughout the mountain, as well as construction of an extensive industrial complex above ground where nuclear waste could be received, repackaged and set on storage pads to await burial.

One key goal is to relocate thousands of tons of waste that the government is paying utilities millions of dollars to keep onsite in pools and in hardened above ground containers.

The legislation would allow the Department of Energy to contract with companies willing to gather the waste and place it in centralized interim storage – but only after the Nuclear Regulatory Commission completes a review of Yucca Mountain and decides whether the controversial Nevada site 100 miles northwest of Las Vegas can safely hold the material for periods up to a million years.

It also would authorize “benefits to host communities,” including payments and authority for federal agencies to prioritize prized activities for states that house the repository or interim storage facilities.

The most controversial provisions would grant a formal land withdrawal for construction to commence at the Yucca site, and the water rights necessary for the repository to be built.

The state of Nevada that has battled the Yucca Mountain Project as unsafe and unwanted has fought federal lawsuits after refusing to grant water rights for the endeavor. A bid in Congress to overrule a state’s control over water could prove highly controversial.

“This is a guarantee of lengthy litigation,” said Bob Halstead, executive director of the Nevada Agency for Nuclear Projects.

In another likely hot-button issue, the proposal would allow for a license amendment so that the capacity of a Yucca Mountain repository could be expanded beyond its current 70,000-ton limit set by law.

Rep. John Shimkus, R-Ill., has been the most outspoken proponent in Congress of reviving the Yucca project. He has said he was forming a nuclear waste bill but said he was not behind the specific provisions that surfaced this week.

Other sources said it appears the new plan was being put together by more senior members of the House Energy and Commerce Committee.

Nye County Commissioner Dan Schinhofen, a supporter of the Yucca project, said Wednesday he had been invited back to Washington to testify at a House committee hearing next Wednesday on the matter. But he said the session was postponed.

“I’m happy to do whatever we can to move this forward” to a resolution on Yucca, Schinhofen said. “I think this would help us do that.”