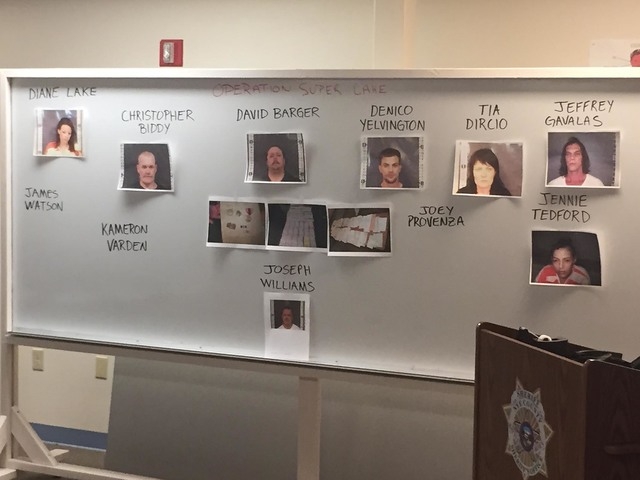 Pahrump businessman Joseph Provenza is no longer wanted by police after showing that he is not a “convicted person” under the law, the Nye County Sheriff’s Office announced Wednesday night.

Provenza was identified as a suspect for a gun charge during the Operation Super Lake forgery and identity theft investigation when a gun was found in a bedroom in a house he owned. Police said March 16 that Provenza was wanted for questioning as an ex-felon with a gun, however it is unclear if a warrant was ever issued.

“He was able to produce documentation that his previous conviction was dismissed after successful completion of sentencing obligations,” the Sheriff’s Office said in a statement. “As such he is not considered a convicted person by statute and thus probable cause for his arrest is no longer there.”

On March 19, Leavitt sent the Pahrump Valley Times a letter he stated he also sent to the Sheriff’s Office, that claimed Provenza was innocent, and was not a felon in possession of a firearm.

“Despite the fact that Mr. Provenza has never been convicted of a felony, the Nye County Sheriff’s Office has defamed and slandered Mr. Provenza by indicating that a warrant has been issued for his arrest for being an ex-felon in possession of a firearm,” Leavitt said in the statement.

Leavitt also claimed that sheriff’s deputies, “ran some kind of tank/armored vehicle through Mr. Provenza’s front yard, breaking down his gate and damaging his fence.” Leavitt said that in doing so, the sheriff’s office was in violation of the knock and announce rule.

When reached for comment on March 19, Nye County Sheriff’s office said in a statement the vehicle in question was not an armored vehicle, but in fact a Ford F-150 pickup truck.

Additionally, Leavitt mentioned that various items of Provenza’s were damaged in the police search, including a flat screen television, clothing, among other property of his client.

The sheriff’s office explained that the only damage that they were aware of was the damage to the fence.

In addition to the damaged property claims of Leavitt, he also claimed that police shot Provenza’s dog with rubber bullets, even though it wasn’t aggressive, and took various property of Provenza’s including two guns, a debit card and a safe.

Police said they were unaware of any items being seized, other than what was listed in the warrant inventory.

Police are still looking for Kameron Varden, who was staying at Provenza’s house at the time of the raid.

Joseph Williams, who was at the house during the police raid, was arrested on drug charges.