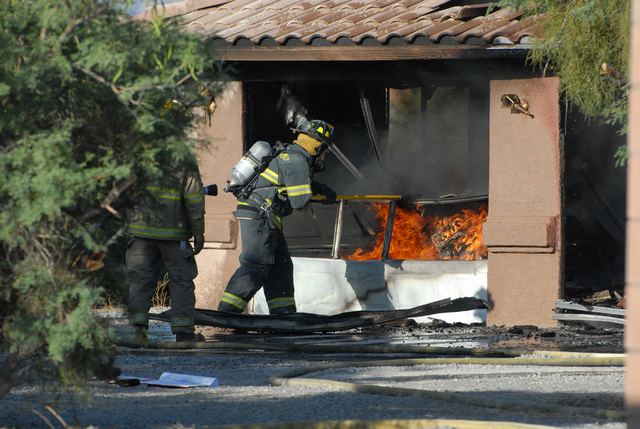 They average more than 600 responses each month, ranging from house fires and motor vehicle accidents to EMS calls for strokes or heart attacks.

The day-to-day activities of crews with Pahrump Valley Fire and Rescue Services are not routine, nor are they predictable, which is why both Pahrump Town Board members and staff believe one of their greatest fears is about to be realized.

This week, board members learned that one-third of the town’s fire department is seeking employment in Las Vegas.

Those who support the privatization of medical services say it’s a money saving measure for municipalities faced with budget problems.

Town Board Chairman Harley Kulkin said on Wednesday eight firefighters have been offered employment by other agencies, which may leave PVFRS short-handed.

“We just want to put out a public alert for Pahrump residents to know what the county has planned for our town. They have not put out an official notice to town personnel about what their future is. These eight highly trained and certified individuals in Pahrump have been accepted to work for agencies in Las Vegas. It’s a terrible loss for the residents in this community,” he said.

The exodus, according to Kulkin, could happen in as little as two weeks.

As a result, the chairman said public safety in Pahrump will be compromised as the fire department’s resources and personnel are already stretched to the breaking point.

Additionally, he said, the fire department’s crews are cross-trained as EMTs (Emergency Medical Technicians), as well as full-time firefighters, unlike many other communities where they are either firefighters or EMTs.

“The public needs to be aware and naturally we’ll have to prioritize. These professionals are highly skilled as firefighters and medics. They drive the ambulances, which have to take priority. A local family may have a fire and not be assured of the firefighters getting there when they should. Someone may have a medical situation, but if there was another of more importance, they will have to wait,” he warned.

Snow said allowing a for-profit ambulance service to assume the town’s fire department medical responses is not a good idea.

“Bringing in a for-profit service will not only harm the Town of Pahrump and the citizens, they would be much better served going with full-service firefighters. For-profit services do not provide the same level of service as fire departments do,” he said.

Kulkin, meanwhile, said the town has previously considered privatizing the ambulance service, but decided not to do it.

“You have to ask yourself how the town ended up with the ambulance service in the first place? Because the county was losing money on it, but the town has turned it around,” he said.

Board member Dr. Tom Waters said he has strong concerns about how Schinhofen handled the matter.

He said there is a proper “chain of command” that should have been followed.

“That way, you don’t undermine everything that the town is trying to accomplish,” he said.

Kulkin said if the firefighters are hired by Las Vegas agencies, the town will have a difficult time trying to fill the vacancies.

“How can we offer a job to somebody when I can’t tell them their future? Who would want a job for only three months? The public really needs to be aware of this,” he said.

A 10 a.m. meeting was scheduled on Wednesday between Town Manager Susan Holecheck and county officials regarding the subject.

Holecheck said that meeting was abruptly canceled with no notice.