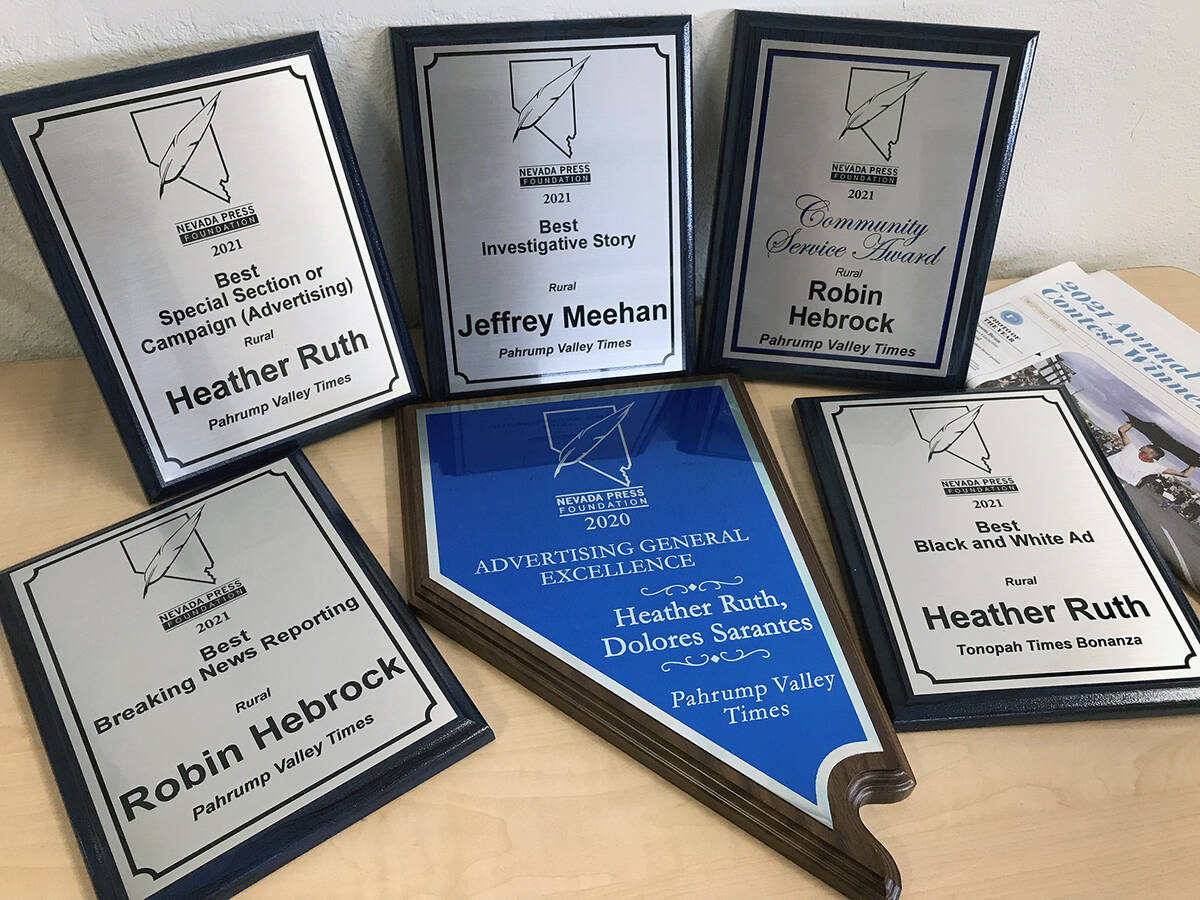 The team at the Pahrump Valley Times and its sister publication, the Tonopah Times-Bonanza &Goldfield News claimed top honors in several categories at the Nevada Press Association Awards this year, including first place for Investigative Story, Breaking News and Community Service. In addition, the Pahrump Valley Times won first place for General Online Excellence and both publications netted awards for advertising, as well as overall design.

The award for General Online Excellence in the rural division was credited to the entire editorial team at the Pahrump Valley Times, including editor Jeff Meehan, reporters Robin Hebrock and Selwyn Harris, and former sports editor Tom Rysinski, with the judge’s comments reading, “Great website. Easy to navigate with plenty of interactive features. Nice to see so many videos incorporated so well. Loved the weed control story. Well done!”

“The annual newspaper awards are a time of reflection on the excellent work by the Pahrump Valley Times team and the importance of local journalism,” Meehan stated following the awards banquet held in Reno this September. “Being able to bring forward the local stories that need to be told is vital for Pahrump and its surrounding communities. As editor of the Times, I’m proud of our team and the work produced each week, and I look forward to future projects for our communities here in Nye County.”

In addition to heading the team that took home General Online Excellence, Meehan scored an individual first-place win for rural Investigative Story for his work on “Taps close at Pahrump Valley Winery.” The judge was quite impressed with this piece, remarking, “Investigative storytelling at its best. Loved the writing style. It hooked me immediately and helped me come to know the players in this drama. Great job!”

“Investigations are never easy with so many parameters to deal with,” Meehan said. “Beyond just the data, knowledge and tools, a good investigation comes down to reading the cards well. I look forward to continuing this type of necessary and vital work for the Times.”

Pahrump Valley Times reporter Robin Hebrock took home two first place awards, with her piece titled “State Engineer prevails in Pahrump water case”, earning her the Breaking News Reporting award and her series of articles on the Remote Area Medical Clinic in Pahrump in 2020 garnering her the Community Service award, both in the rural division.

On her water order conclusion article, the judge commented, “This reporter did a masterful job of explaining an incredibly complex case. Good, clear, authoritative writing separates this entry,” while the judge for the Community Service category noted, “Thorough reporting on a truly valuable public service.”

“Winning the Community Service award for the coverage on Remote Area Medical was very special to me, because I’ve been covering RAM since its first year here in the valley, when I was still getting my bearings as a reporter for The Mirror,” Hebrock said. “It’s something that has a big impact on our community and that’s what reporting is really all about, providing readers with information they need. I can’t go without a shout-out to RAM Committee member Ryan Muccio, either; this award is partly his, in my opinion, because I couldn’t have gotten it without his hard work as well.”

As for earning first place for Breaking News Reporting, Hebrock noted that this particular award is one that stands out for her because of the years of tracking that went into the story. “Those familiar with the saga surrounding Nevada State Engineer Order #1293A will already know that it all began in late 2017 when the order was initially issued and I followed this topic, action for action, for a full three years before it finally came to a conclusion. Again, this was something with a huge impact on the community and whatever side of the fence readers found themselves on when it came to the water order, it was a subject of intense interest.”

On the advertising front, graphic artist Heather Ruth cleaned up in the Black and White Ad category of the rural division, taking home not just first place, but second and third as well. Her first- and third-place awards were both for her work on the Tonopah Times, while her second-place award was for the Pahrump Valley Times. Judges’ comments on her ads included, “Simple but elegantly done,” “The layout of photos is fun. Great placement and separation for the wording,” and “Cute artwork, clean layout.”

This is not the only category in which Ruth won first place, either, as she was deemed best in the Advertising Special Section or Campaign category of the rural division for the Pahrump Valley Times’ 2020 graduation issue. Another third-place award went to Ruth for rural In-House Advertising.

In the Overall Design category for the rural division, page designer Jessica Sterling won both second and third place, second for her work on the Pahrump Valley Times and third for her page layouts in the Tonopah Times-Bonanza. “Slightly busy front pages but they hang together and offer lots of entry points. Section fronts are consistently strong,” the judge remarked of her Pahrump Valley Times designs, while on the Tonopah Times, they noted, “Clean and attractive front pages with strong visual cues.”