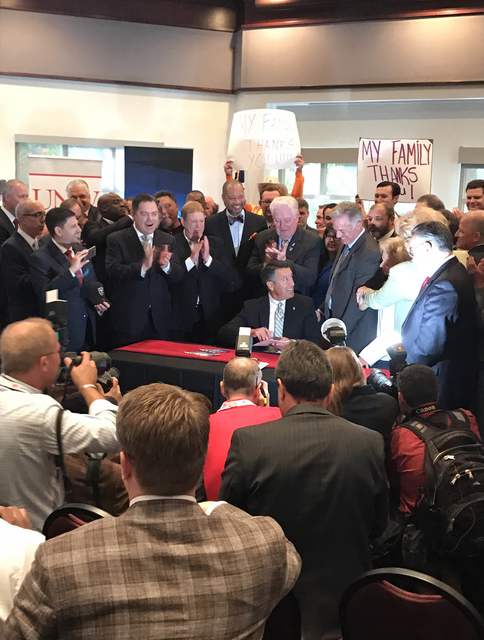 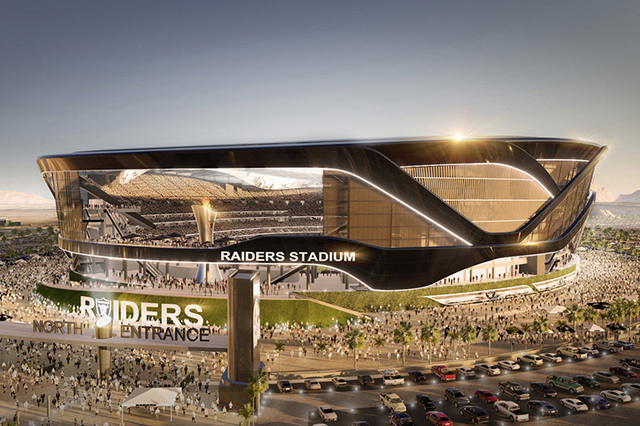 In a party-like atmosphere on the campus of the University of Nevada, Las Vegas, Gov. Brian Sandoval signed Senate Bill 1, which appropriates $750 million in a lodging tax toward a potential $1.9 billion, 65,000-seat domed NFL stadium in Las Vegas.

SB1 will generate that $750 million in tax money by establishing a 96 cents a room tax on hotel rooms in a 25-mile radius of the Clark County building where the commission holds its regular meetings in downtown Las Vegas. A separate hotel room tax increase to help fund a $1.4 billion upgrade to the Las Vegas Convention Center also was signed into law as part of the stadium bill.

The remaining funding for the stadium will come from a $650 million pledge from Las Vegas Sands Corp. CEO Sheldon Adelson, and a $500 million contribution from the Raiders.

Of those votes, all five representatives of Nye County voted against the bill, including Assemblyman James Oscarson and Senator Pete Goicoechea.

Oscarson explained that he isn’t entirely opposed to the stadium, just the dealings behind it.

“My vote today on SB1 was not a vote against jobs, a stadium, or economic development, it was about not allowing this legislation to be enabling, allowing the elected officials closest to the people to make these critical decisions,” he said.

Sandoval was pleased about the passing of SB1, which could draw the Raiders to Las Vegas. As he was about to sign the bill into law, Sandoval explained what the bill means for Las Vegas and the state of Nevada as a whole.

“This is an epic day for the future of Southern Nevada, in fact for the entire Silver State,” he said. “It’s a day we’re all going to remember, one that marked a new era in the history of one of the world’s greatest cities.”

With the collaborated effort between the SNTIC meetings and then the Nevada Legislature in its special session last week, Sandoval applauded the bipartisan nature of the dealings.

“The teamwork that was demonstrated by Republicans and Democrats, people from north, south and rural, have showed when opportunities come to us we work together to keep Nevada moving forward,” he said. “I can’t tell you how proud I am.”

Davis explained that the deal was no sure bet and that he was worried about its passing even as he was at the signing ceremony.

“I was nervous until about 20 minutes ago, when the bill was signed,” Davis said.

The jovial atmosphere included the UNLV band playing its fight song and Viva Las Vegas among other tunes, was a nice touch, according to Davis, as the signing of the bill was cause for a celebration in his mind.

“There was a reason for a band to be playing today, because the city and the state came through,” Davis said. “It’s amazing. It’s just absolutely amazing.”

The Raiders were involved in the entire process leading up to the signing of SB1, as Davis said he gives credit to two members of his organization as the ones who led the way for the team.

“Mark Badain, the president and Dan Bertorelli, our legal advisor, spent hundreds, maybe a thousand hours working on this project, day and night with the SNTIC and came up with a solution that everybody was happy with,” he said.

UNLV brass are happy about the deal, as its football team is slated to play in the proposed new stadium in addition to the Raiders, something that goes far beyond sports, according to UNLV President Jessup.

“This is transformational for the university, not only for athletics but for our entire university,” Jessup said. “It will be huge for the city building the stadium and brings the Raiders to town… but it also works into our plan to achieve a Tier 1 university.”

The stadium being built and the Raiders coming to town rests on the shoulders of the other 31 NFL owners, as 75 percent of NFL owners (24 of the 32 NFL team owners) need to vote in favor of the move, in order to get the shovels into the ground and get the stadium construction process rolling.

The vote among the NFL owners is expected to take place in January at the league’s annual coaches’ meeting.

If the NFL votes against the Raiders relocating to Sin City, UNLV can get a smaller share of the room tax and build a smaller, 40,000-seat collegiate stadium, if they come up with $200 million within a two-year timeframe after the NFL’s rejection.