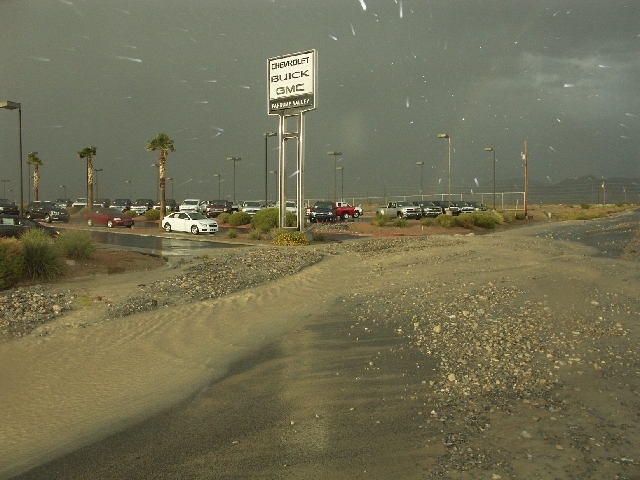 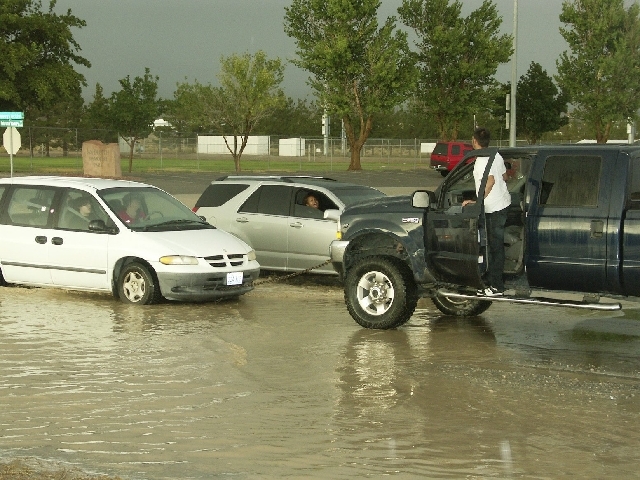 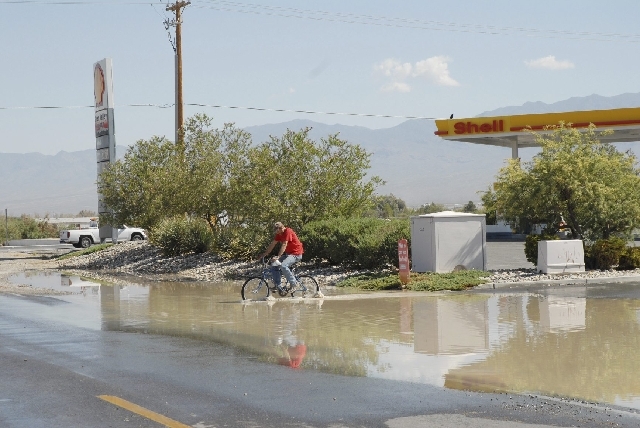 Severe weather struck Pahrump Valley for the second time in two weeks on Sunday when summer monsoon storms dumped a torrent of rain, turning streets into rivers and creating havoc in other ways.

Last week, the valley was pummeled by winds of up to 80 miles an hour, leaving trees snapped and significant property damage in its wake. The community had barely cleaned up from that before Sunday’s storm struck.

The deluge may also have broken a record for total rainfall in one day.

“The Weather Service reported to us that their observers picked up anywhere from one half to an inch and a half of rain, but I’m sure some parts of Pahrump got more. Anytime we get a significant rainfall event, it’s always a daily record but I would doubt it would qualify for an all-time record because I’m sure there have been days where there have been two to three inches easily,” Janison said.

Last weekend’s forecast did call for thunderstorms but Janison said that gauging an accurate amount of rain is not always an exact science, especially in the desert southwest.

“Anytime you have these summer thunderstorms, they can really open up and produce a lot of rain in a short period of time. If you had that kind of rain in Indiana or Alabama, it would just be a wet couple of hours but here you are guaranteed to have a flood especially because our ground is so hard and we are all in valleys, the Las Vegas Valley, the Pahrump Valley, the Amargosa Valley. We are going to flood if we get a quarter to a half inch of rain in a short period of time. It’s part of the price that we pay for living in the desert,” Janison said.

By Monday, that price was paid in full by several local businesses and homeowners in town.

Gibson and Kuehn, offices for two of the county’s public defenders on East Basin, took on several inches of water following the storm.

Employees spent the morning carrying drenched boxes of documents and court records from the building to a U-Haul truck for storage.

Just next door, ZZ’s Pet Boutique also had water that breached its front entrance. According to Manager Diane Jackson, a muddy floor was all the damage the store received.

“It was not as bad as I thought it would be but my main concern was the pet food. I was so glad that the food was not affected. A few dog and cat trinkets were affected. Unfortunately the law office next door got the brunt of it. The other business next to us is an animal hospital and they have a lot of sick animals but they were not hit so nothing was damaged,” she said.

Brian Strain, a local insurance agent, was outside his business with several employees sweeping up dirt and mud on Monday.

Strain’s office is located in the complex near Albertson’s grocery store.

“It was raining hard where my wife and I live and I began thinking about the office. It took me awhile to get here because all of the roads were flooded with water and mud. By the time I got to my office, water was already coming through the front door because it was higher than the sidewalk. I did what I could by blocking it off as much as possible. A couple of hours later the water subsided. I had a crew from Nye County Flood Response out here to suck up the water and they pulled out the baseboards in the office. They even had to pull all of the furniture away from the wall,” he said.

Strain was also concerned about any peripheral damage created by the water inside his business.

“The water damage is bad enough but if it sits more than a day or two, you start to get mold and mildew and that’s a whole different level that you really don’t want to deal with,” he said.

Road crews scrambled to keep mud and debris at bay throughout the area. The cleanup was ongoing Tuesday.

County Commissioner Dan Schinhofen said rains created widespread problems for motorists traveling around many parts of the community, especially on parts of the far south end of town.

“Homestead is a perfect example. From Highway 160 to Gamebird there was not a lot of stuff or wash-outs on the roads. When you go past Gamebird on Homestead, then you have the mud, gravel and everything else. I think it hit the center of town hardest. My end of town didn’t get the wash-out that it usually does,” he said.

“It was just a lot of mud and gravel but nothing real serious. We had a crew all day on Monday cleaning up, but no real damage at all,” he said.

The town’s Pahrump Valley Fire and Rescue Services were called out multiple times during the storm to rescue stranded motorists.

Fire Chief Scott Lewis said his department responded to more than a dozen calls for service.

“The majority of the calls were for motorists who had gone into rising waters and their vehicles became disabled, which left them in a precarious position where they could not get out or that the vehicle was starting to float within the waters. It necessitated our response where we utilized our four-wheel drive vehicles, tied off and move the people from their vehicles to our units where we got them to higher ground. We responded to about 20 incidents and approximately 23 individuals were removed from their vehicles in various parts of town from the area of Homestead and Gamebird, Honeysuckle Road, Mt. Charleston and Jackrabbit. There were also a number of vehicles in the area of the town office parking lot area,” he said.

Lewis noted that his crews were dispatched to other weather-related calls over the weekend.

“There were no serious accidents or fires but there were several electrical arcing incidents involving tree tops and a utility pole was struck by lightning, which resulted in a small fire that was easily extinguished with the rain,” he said.

The fire chief also said some of the water rescues involved people who just decided to drive around town viewing the damage from the storm or making unnecessary errands on that day.

“They indicated that they just ventured out in the weather. It wasn’t like they were returning from somewhere. They were running errands and going to the store. Once they became stranded in the water, it then became a secondary issue because their vehicles remained there so we had to navigate around that and posed somewhat of a challenge for us,” he said.

With the beginning of school roughly a month away, Nye County School District officials said all in all, local campuses and northern county schools fared pretty well.

Maintenance and Transportation Supervisor Cameron McRae said the district is assessing issues related to the rain.

“We have some facilities and school sites with no reported problems as of 2:10 p.m. Monday. We have had some reports of typical leaks and a modular that sustained some wind damage. It’s nothing real serious but we have to get out there and get it done. We also had some damage to one of the play structures at a school and we’ll be having the manufacturer look at that for hopefully a warranty because it’s not that old. We have had some issues but the site and support staff is dealing with them,” he said.

McRae also noted that schools in northern Nye County sustained little or no damage in the storm’s wake.

“No one from the north has called me with any issues. Tonopah wasn’t bad. Beatty barely looked like it had any rain at all. We do have summer school so we had a few diversions on Monday but the parents were mostly good about meeting us at a different location or bringing their students to school because their identified bus stop locations were like a swimming pool,” he said.