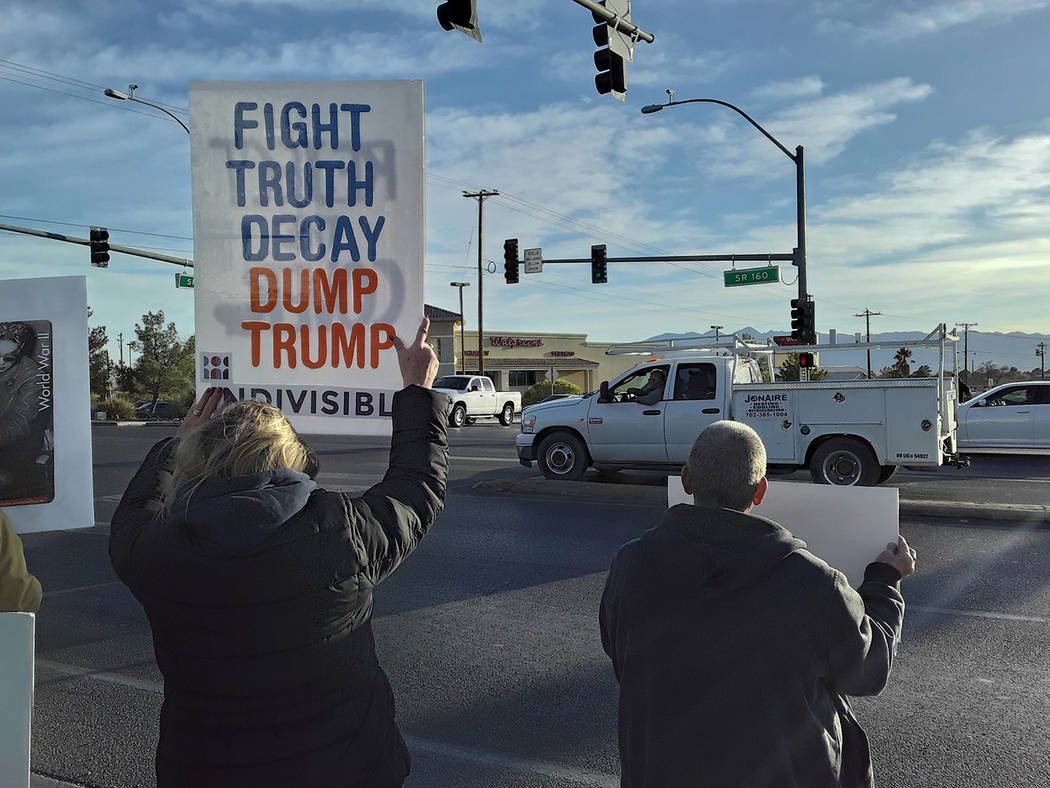 Selwyn Harris/Pahrump Valley Times A group of individuals opposed to President Donald Trump's impeachment acquittal, exchange words with a Trump supporter at the intersection of Highway 160 at Crawford Way on Wednesday afternoon Feb. 5. 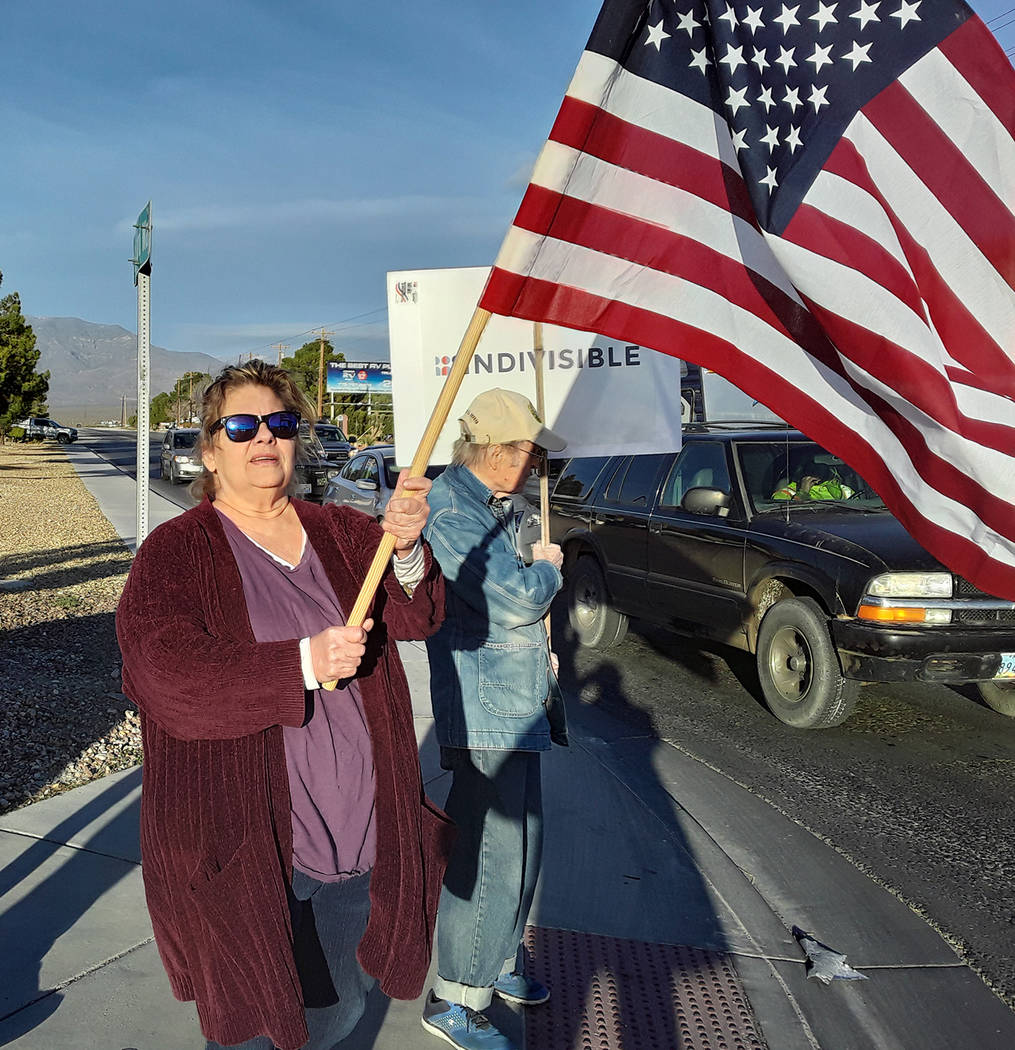 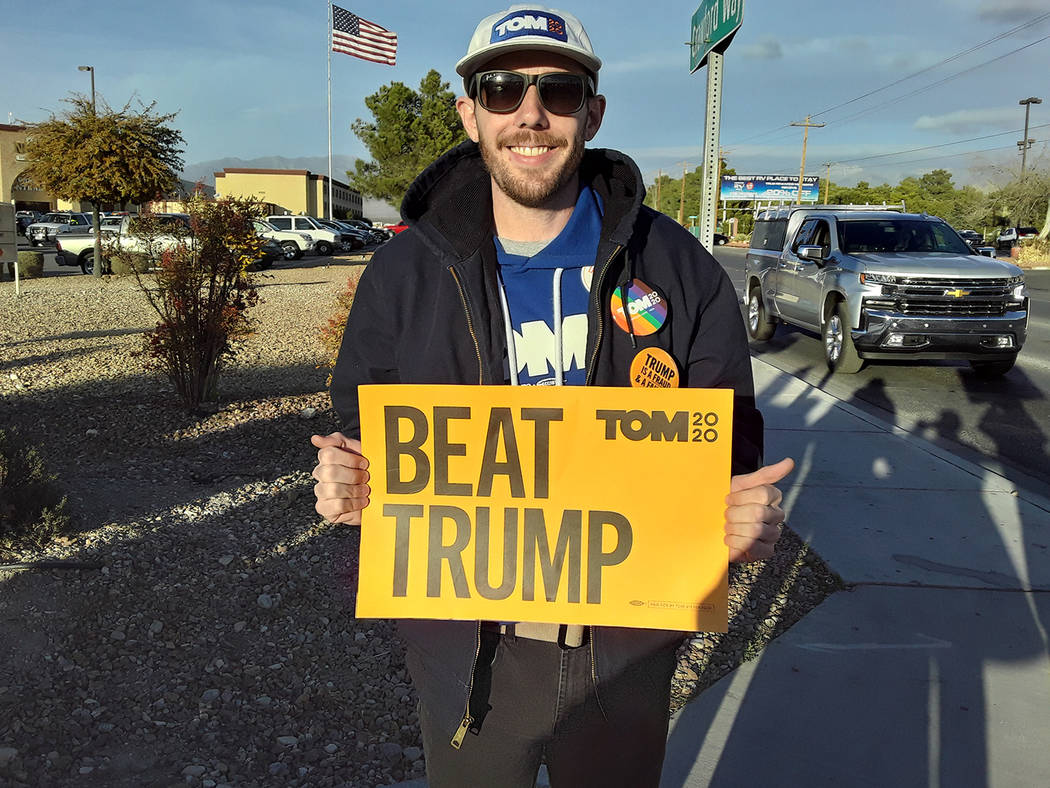 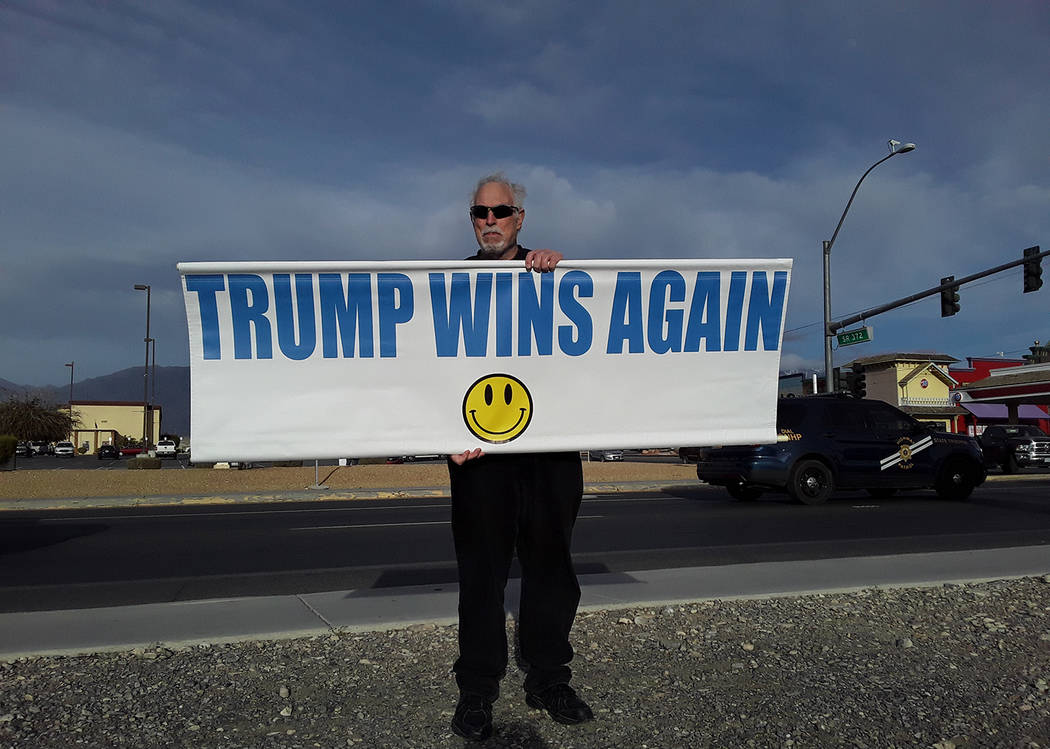 Selwyn Harris/Pahrump Valley Times Pahrump resident Gary Marchinke walked along the intersection of Highway 160 at 372, following President Donald Trump's impeachment acquittal on Tuesday afternoon. As a proud American, Marchinke said he kneels for the cross and stands for the flag.

Pahrump resident Gary Marchinke said he kneels for the cross and stands for the flag. But on Wednesday afternoon Feb. 5, Marchinke was pounding the pavement for roughly two hours at the corner of Highways 160 and 372, with a banner in hand in support of President Donald Trump’s impeachment acquittal, courtesy of Republicans in the U.S. Senate.

Displayed on his banner were the words “Trump Wins Again,” along with the image of a yellow smiley face, as he applauded the Republican Senate’s action.

Utah Senator Mitt Romney was the only Republican to vote to convict Trump on the first article of impeachment, that being abuse of power, as he sided with Senate Democrats in a 52-48 guilty vote.

Romney did however, side with Republicans against the obstruction of Congress charge, which fell along party lines with a 53-47 vote for acquittal.

Although Marchinke, who leans Republican, voted for the current president, he did not disparage Trump’s Democratic predecessors, unlike some Trump supporters and Republican lawmakers.

“I thought President Obama was an honorable person,” he said. “I didn’t always agree with him, but I think he is an honorable person, and I never had a problem with him. I don’t think Clinton was a bad president, but I don’t know how history is ultimately going to judge him. I also liked Jimmy Carter, and I actually met him when he was working for Habitat for Humanity in San Diego. He was a real neat guy. I loved President Kennedy too.”

As Marchinke was preparing to roll up his banner and leave the intersection, another group, also carrying signs and banners, assembled just across Highway 160 at Crawford Way.

While holding the American flag aloft, Pahrump resident DeDe Jones and roughly two dozen other individuals, had a much different take on the impeachment acquittal.

“We are members of ‘Indivisible of Nye County’ and we are called the Prickly P.E.A.R.S. of Nye County which stands for People Energetically Activating in Resistance,” Jones said. “We believe in country over party, and we are appalled by the cover-up the Republican senators allowed. If Trump wins in November, I hope that we take back the Senate, and keep the house majority. We need to rid our country of the corruption of this criminal. I watched all of the impeachment trial, and I think that people need to use their brains more.”

Additionally, though Jones said she also watched the State of the Union address, she was not pleased with what she heard from the president.

“I could not keep up with the lies that he told about the economy and about the jobs created,” she said. “Not once did he talk about the families still being ripped apart at the border. He said he wants to save pre-existing conditions in health care, but how come he is trying to take them away? We are a retirement community and we are going to be greatly affected with our medical care. I would say the Kool-Aid cult is definitely voting against their own interests.”

Regarding Wednesday’s rally, Jones said participants would previously drive into Las Vegas to express their respective feelings about the president and the Republican Party.

“This was an impromptu throw-together,” she said. “We founded and chartered our own branch of Indivisible of Nye County last year and we are going to take an active role. Right now, the next step we can take is toward the ballot box. We also have a Facebook page.”

Interestingly, it appeared that Marchinke came to the same conclusion as Jones, regarding President Trump’s tenure.

“So he made a few mistakes, but that doesn’t mean you throw him out,” he said. “The people voted for him and I think people should just wait for the next election where they will get a chance to express their thoughts and feelings. You will never see me out here putting somebody down because I always try to do something that is positive and uplifting. We have a large majority of Trump people here in Pahrump. If I came out here with an anti-Trump sign, I could get stoned, but this is safe and it’s not really putting anybody down.”