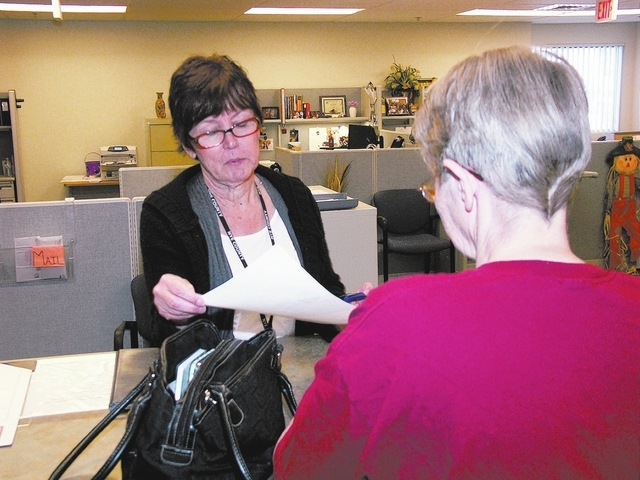 A recall effort is underway to unseat two elected officials, one town and one county.

A Notice of Intent was filed at the county clerk’s office naming both officials.

Recalls have made for local political theater the last few years in Nye County; this latest effort is unique by virtue of the petitioners.

Longtime local residents Richard and Dona Goldstein said they are fed up with the antics of Cox and Riches, who in their opinion have shown themselves to be ineffective leaders.

Beyond removing the two women from office, the couple wish to replace Cox and Riches by taking the positions themselves, with Richard Goldstein replacing Riches and his wife replacing Cox.

On Wednesday, Mrs. Goldstein filed the Notice of Intent on Cox at the Nye County Clerk’s office.

Dona Goldstein said she was considering filing the recall for some time.

“I have been thinking about this for the last four months. I have been following her activity on the county commission since she was first elected. I watched continual violations of open meeting laws and having to be called out by the commissioners. Her lack of appearance at the first county board meeting in Tonopah is a big concern. The position does draw a salary and they expect you to be at the meetings. I am sure her constituents expected her to be at those meetings. I didn’t expect her to resign all of her liaison offices, which all of the other commissioners do have and that’s a responsibility you take when you enter into the job,” she said.

Additionally, Dona Goldstein said she believes Cox arrives at commission meetings totally unprepared and is not familiar enough with many of the agenda items that go before the board.

“I just find that she is not attuned to the material on the agenda and does not perform proper research or even ask questions of staff. You have all of these things available to you and need to use them. The county budget is a big problem and I don’t see it getting better anytime soon. I am a numbers cruncher from way back and I have 45 years experience in the accounting field. Numbers matter and they are our tax dollars and somebody has to be accountable,” she said.

Cox responded to the recall news by saying she is not surprised by Goldstein’s actions, which she suggested is purely political.

“I don’t think this has anything to do with me or my job or Amy and her job. They are just nitpicking to find something that they can use,” she said.

He pointed to an image posted on Riches’ Facebook page that depicted what appeared to be a Muslim man on his knees while a goat mounts him.

A caption below the image read “It’s Payback Time.”

“The trash she put on Facebook was totally racist and bigoted. I realize she has freedom of speech, but she is a public official now and she cannot be posting stuff like that where everybody can see it,” he said.

Riches, however, is unapologetic.

At the same time, she questioned Richard Goldstein’s political and religious allegiance.

“I think Mr. Goldstein is pro Islam. Why else would he do this to me? I do not know. I just intend to sit back and see what the people do,” she said.

Riches also said that she’s not a technical whiz when it comes to understanding Facebook.

“I don’t know but I have no intentions of deleting it whatsoever,” she said.

Nye County Clerk Sandra “Sam” Merlino said this week that she was aware of the recall effort.

She noted that the Goldstein’s must abide by a deadline in order for the recall effort to be valid.

“They have 90 days to circulate the petition and turn it in. They need to gather signatures from 25 percent of the people who actually voted in that election. There is a difference between a regular petition. Some are just a certain number of signatures they need to get but in a recall it actually has to be those who voted,” she said.

According to state law, any citizen has the right to instigate a recall.

Merlino said Richard Goldstein must also include the reason for the action.

“They have to make sure that any person signing that petition is very aware of why they are signing the petition. If all of the signatures are valid, then we hold a recall election. We have a very short time frame from the time the petition is deemed sufficient, I have about 30 days to notice a call for the election and it’s usually held within a month. It’s a very fast process,” she said.

Both say they are confident about their chances.