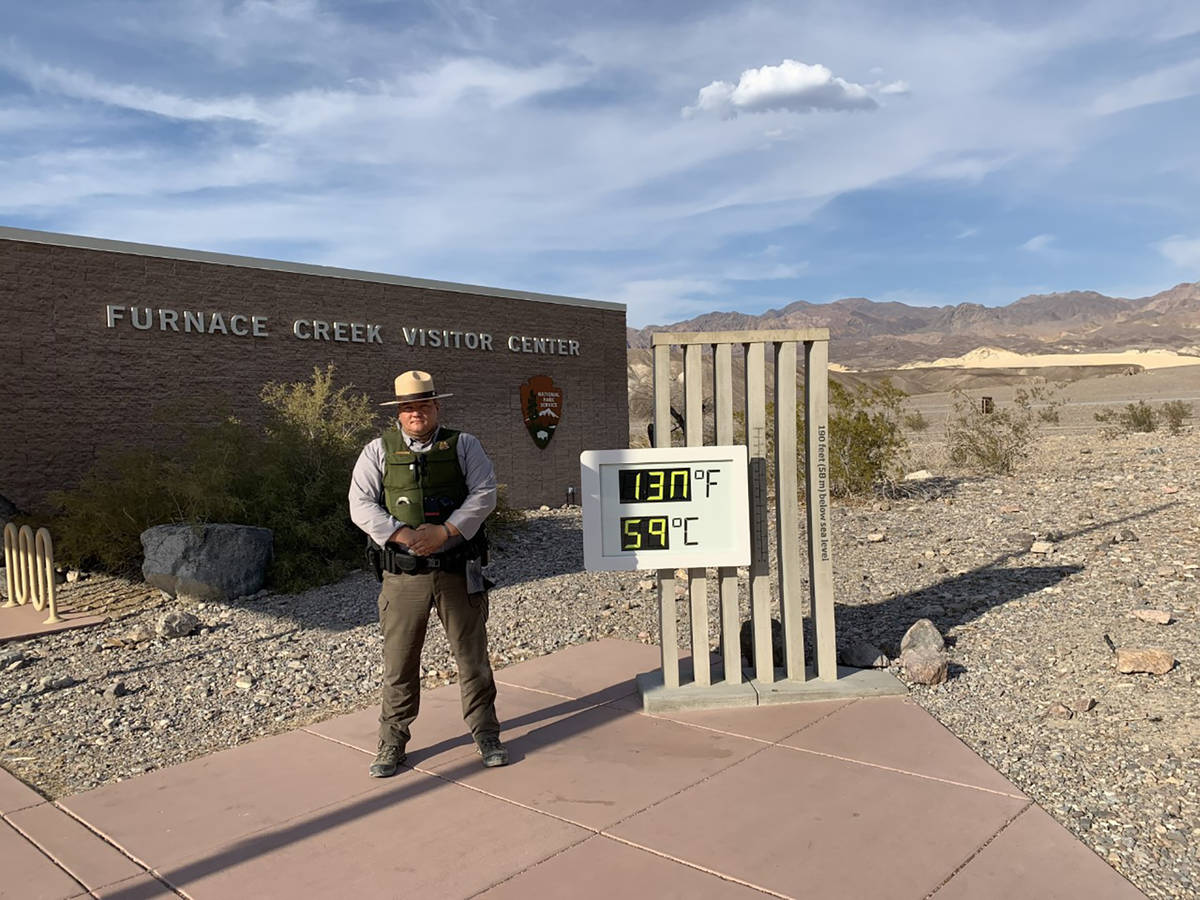 Special to the Pahrump Valley Times A Death Valley National Park Ranger stands beside a digital thermometer displaying a record 130 degrees on Sunday, August 16. Last month several vehicles broke down due to overheated engines. The recent heatwave has also attracted both national and international interest in media outlets.

It appears that Death Valley National Park is living up to its reputation as being the hottest, driest, and lowest place on earth.

On Sunday, Aug. 16, the park hit 130 degrees, according to Public Information Officer Brandi Stewart, who has lived in Death Valley for close to six years.

“If that temperature is verified, it is the hottest temperature ever recorded on earth since 1913,” Stewart said. “If you live in Death Valley, honestly, you get used to it. You spend a lot of time indoors, or traveling to the mountains to get to cooler weather.”

Pahrump also tied the highest monthly temperature on record for August, 112 degrees, twice, on both Sunday and Monday. The highest August temperature was recorded on Aug. 27, 1923, said Caleb Velebstele, meteorologist at the National Weather Service’s office in Las Vegas.

Velebstele said the heat is pretty abnormal for August.

The weather service’s excessive heat warning is set to expire on Thursday at 10 p.m.

To certify the 130 degree reading, the National Weather Service will test the sensor at the park’s Furnace Creek location to verify that it is working correctly, while a climate extremes committee will be also convened to verify the data.

Just last month, when temperatures rose to 128 degrees, at least three vehicles in the park broke down due to overheated engines.

Fortunately for the visitors, park rangers were available to respond and noted that no major medical incidents were reported.

Stewart, meanwhile, provided advice to those who plan on visiting the park during the summer season.

“They have to plan in advance and need to know that there isn’t cell phone service everywhere throughout the park,” she said. “They should also bring plenty of water with them. In order to have a safe visit during the summer, we really recommend that people stick with their cars, where they can do a photography tour of Zabriskie Point, Golden Canyon and other locations, but you shouldn’t walk a far distance from your vehicle because the heat can get to you pretty quickly. We want to remind them that it’s not as simple as hopping in their vehicle, driving through Pahrump and driving out here.”

The recent hot temperatures at the park have also drawn both national and international interest at the park, according to Stewart.

“The media attention on this record-breaking heat, brings out what we call ‘heatseekers,’ so folks want to come out specifically to feel these hot temperatures,” she noted. “Winter seems to be our busiest season with campers. In a typical year, if we had more international visitation, summer would be pretty busy for us, but because international visitation has declined, we are not seeing the same numbers as we have in the past.”

For those heatseekers, Stewart issued an important reminder regarding what to do if a vehicle breaks down due to overheated engines while in the park.

“It’s a pretty common occurrence,” she said. “With a lot of people, I think their first instinct would be, do you start hiking away from their vehicle, but the number one thing we say is stay with your vehicle, especially if you are on a paved road. It may be a while, but someone’s going to eventually drive by and they are going to see your vehicle, because it’s much easier to see a vehicle than it is to see a person. You should also make pre-planning arrangements if you plan on visiting the park, where you let someone know where you are going and to always check in with them. Therefore, if you don’t check in with them, then they can call 911. A law enforcement ranger or another ranger can see if they are in that location.”

Additionally, Stewart noted that there are services and provisions available at the Oasis at Furnace Creek Visitor’s Center as well as Panamint Springs in the park for travelers.

“Those are places that have general stores, but their hours are different,” she said. “If you check our website, it will tell you what those hours are for those businesses. We do have water fountains at the Furnace Creek Visitor Center, however the visitor center itself is closed, but the bookstore is open and they have bottled water at the bookstore.”

As stated in a park news release, temperatures this week are forecast to continue a heat trend, with an overnight low of 104 degrees.

Visitors can expect temperatures in the 120s for the rest of the week.

“Working at a park that is the hottest place on earth is really exciting,” said Park Superintendent Mike Reynolds. “We definitely come together as a community to celebrate these records and the uniqueness of living here but also quickly learn not to touch metal surfaces, like car doors, that have been out in the sun.”

More safety information can be found on the park’s website at, www.nps.gov/deva/planyourvisit/safety.htm