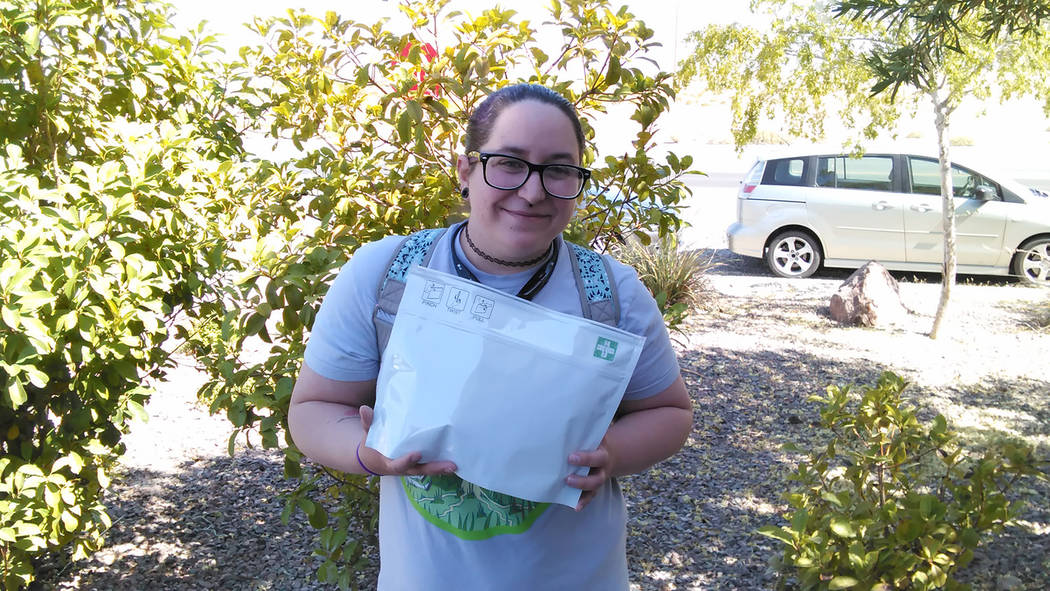 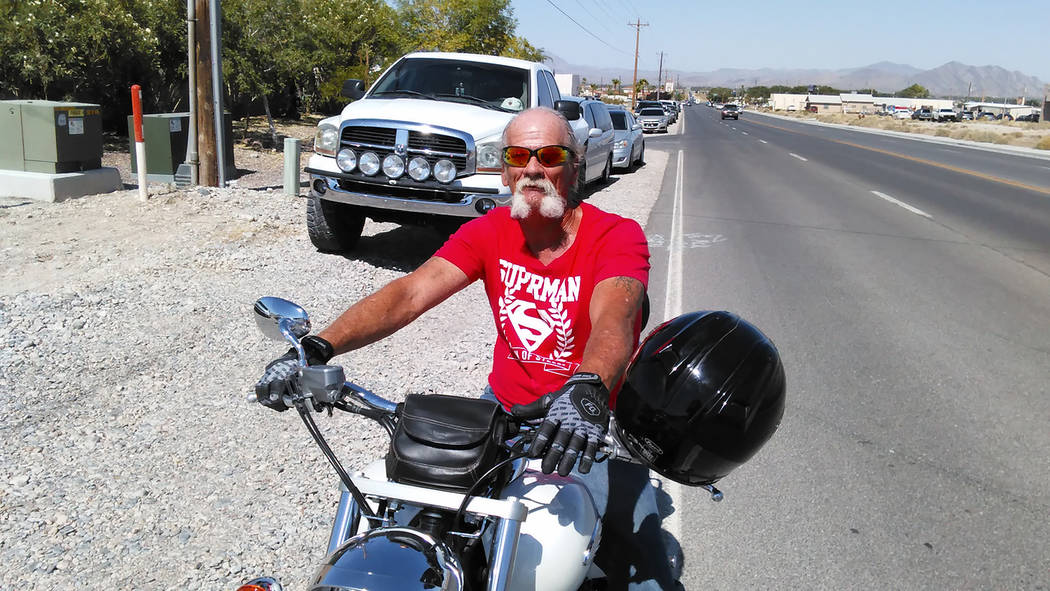 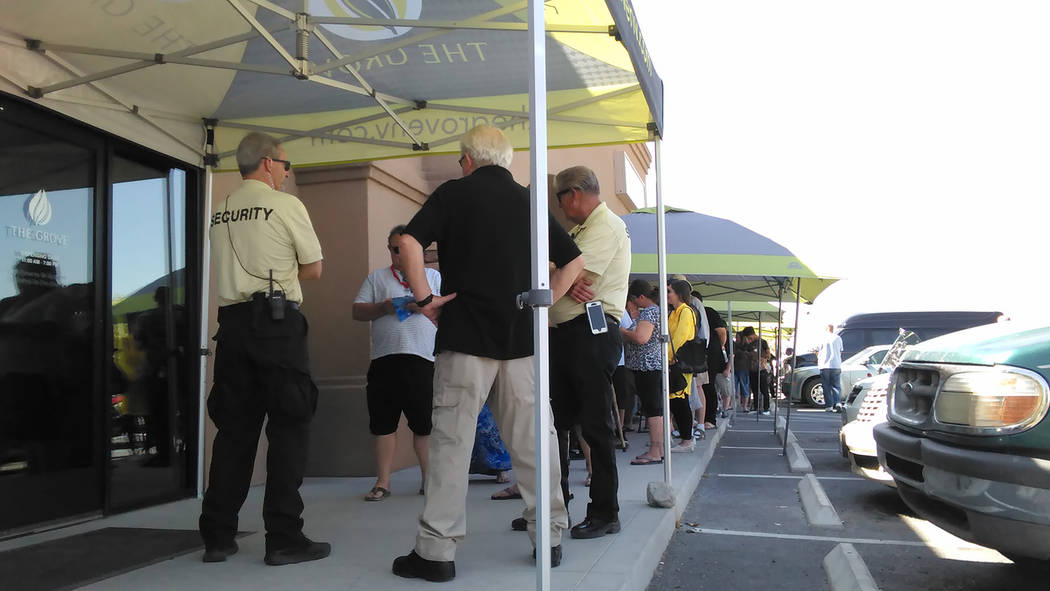 A Facebook post early Saturday from The Grove marijuana dispensary pretty much summed up what pot smokers and the marijuana industry have been waiting so long for.

“It’s finally here,” the post stated. “Today marks a historic moment for the legalization of recreational marijuana in Nevada. Someday we’ll all look back and wonder why it took this long in the first place.”

“Actually our sales were at a record high,” he said. “Right now, we are at 1,300 new medical marijuana patients and on Saturday, we had approximately 632 recreational marijuana customers come through our doors. Saturday really exceeded my expectations regarding the volume of people who came in. Everyone was very polite and the town is really embracing us in full force. We are very happy to be here.”

Additionally, Wright said the historic event was well organized despite the large turnout.

“My staff was all on duty and fully trained and everyone handled it very well,” he said. “We just had a real blast doing it. Some folks had to endure a little bit of a wait because we have a maximum occupancy in our lobby, in order to follow fire codes. On Sunday, we had everyone in and out very quickly. There were no headaches or anything like that.”

Wright also spoke about the overall mood of those who visited The Grove over the weekend.

“There was all kinds of laughter and we had no problems or issues at all,” he said. “Everyone was getting along and they were just happy to be here on this momentous historic day for Nye County as well as Nevada in general.”

First to legally make a purchase

The stay-at-home mom and licensed cosmetologist holds the claim of being the first person in Pahrump to make the first recreational marijuana purchase at the dispensary, located at 1541 East Basin Avenue, just a stone’s throw from the Nye County Courthouse and Detention Center. Business hours are 9 a.m. to 10 p.m. 7 days a week.

“I was actually the first in the door to purchase recreational marijuana,” she said, beaming. “The medical patients got to go in first and everyone cheered as soon as I walked in. It was very cool. The experience was really, really wonderful. Everyone was so nice and offering up valuable information and asking what I was looking for. They did not make you feel ignorant for not knowing anything.”

Among the items Clarity purchased were pre-rolled joints and a few edibles.

“I really love the edibles,” she said. “They have very delicious ones here. Peanut butter granola is my favorite. I have been medicating for about five years and it’s a beautiful day. How could you not be happy? I post a lot of information on Facebook. It seems like everyone is on Facebook these days so I post and share valuable information.”

Clarity also noted that she’s received pushback from family members regarding her use of marijuana.

That has since changed.

“I am also educating my stepmother because she was very, very anti-marijuana,” she said. “I showed her several videos about children who suffered from seizures and elderly people who have Parkinson’s disease. I told her it is a medicine, which it really is. It truly impacts the quality of life, and fortunately, she believes that now. There was a time that she didn’t and she used to look down upon me for smoking marijuana.”

Aaron Todd moved to the Pahrump Valley from the northeast roughly four years ago.

He too was in line waiting for the doors to open.

“I got here at about 7:15 a.m., and they already had the shade awnings out and there were about five to ten people ahead of me,” he said. “The first persons to get here arrived between 5:30 and 6 a.m. I am a construction worker, and I’ve been medicating since I was 21 years old. I don’t like other medicines. In New York it’s not legal, so I came down here where it was legal.”

“I also got a couple of pre-rolls and some hash,” he said. “I like to keep my money in town, so no doubt, I am going to be a regular customer here. This is a wonderful, wonderful day. It is historic. You can literally see the happiness in people’s faces. Nobody has a frown on their face even though they are standing in line.”

One person who was not in line was Pahrump resident Tim Mink.

Mink was out for a ride on his motorcycle and just happened upon The Grove after noticing all of the traffic along East Basin Avenue on a Saturday morning.

Mink lived in Pahrump back in 2002 before moving to Texas for roughly three years.

“I didn’t even know today was the first day for recreational marijuana sales in Nevada,” he said. “I heard something about it on the news but I didn’t really pay much attention to it. I think it’s about time and I figure why not? It’s better than alcohol as far as what it does to your body and brain functions. It’s been going on for a long time in society.”

Though Mink said that though he no longer smokes pot, he doesn’t fault any adult who chooses to do so.

“I used to smoke quite a bit of it each day but I haven’t smoked since 1986 or ‘87,” he said. “I just quit. I guess I just grew out of it. Just because it’s legal now, I don’t think I am going to start smoking or using marijuana again.”

“I’m 61 years old, so I think I’ve grown out of it pretty much. Even though I did enjoy it when I did smoke,” he said. “It wasn’t legal then, but thank God it is now for the people who rely on it. It also prevents a lot of people from going to jail for simple possession. I am now a heavy equipment operator. Right now I am unemployed, but I’m still looking.”

Despite being unemployed, on the issue of his last name being “Mink,” he maintains a great sense of humor.

“Every woman wants one,” he said before riding off.