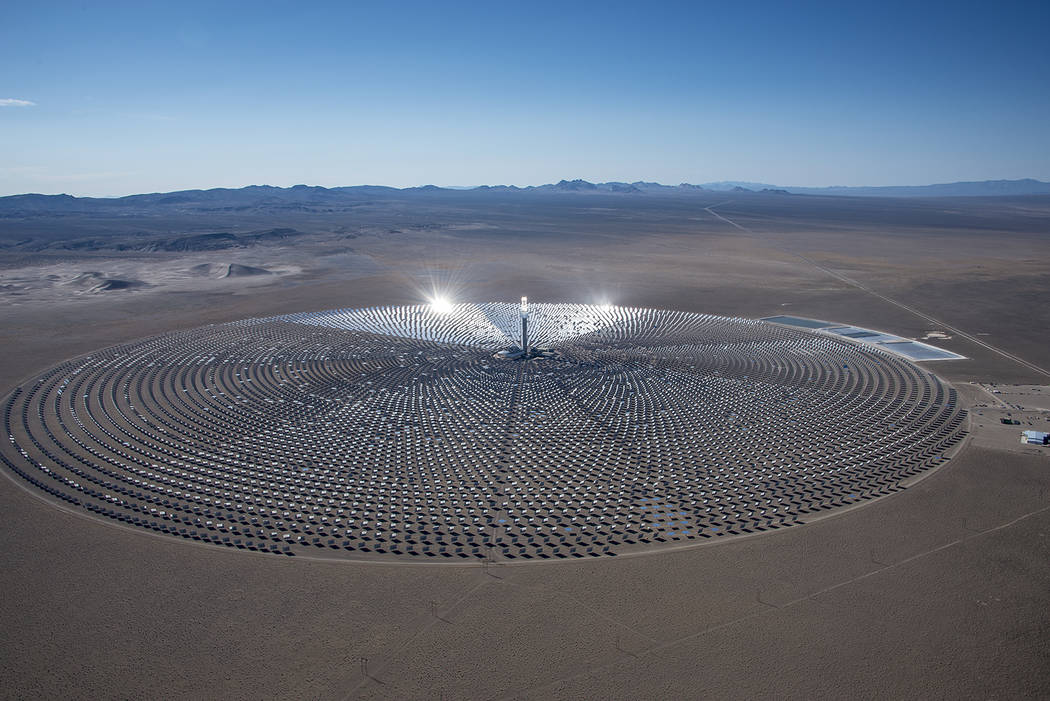 Special to the Pahrump Valley Times Crescent Dunes Solar Project located 15 miles northwest of Tonopah went online in July after more than 8-month outage that was caused by a leak from one of the molten salt tanks in October 2016, less than a year after the plant started generating power.

The Crescent Dunes Solar Energy Project near Tonopah had no energy sales during the second quarter of this year, following the first quarter’s similar path, a recently released federal report indicates.

Tonopah Solar Energy, a subsidiary company through which the plant is operated, didn’t have any sales from November 2016 through June 2017, according to the first and second quarter reports produced by the Federal Energy Regulatory Commission. That is the U.S. Department of Energy’s arm that oversees the wholesale of the power and transmission of power plants across the nation.

Officials with NV Energy, the sole customer of Crescent Dunes, confirmed that NV Energy began receiving energy from Crescent Dunes on July 12 for the first time since the facility was shut down for repairs and maintenance in late October 2016.

The third-quarter report, which should show the plant is producing energy, is not yet available.

The Crescent Dunes project received a $737 million federal loan guarantee from the U.S. Department of Energy in 2011, a step that was seen as critical for its operation.

Under the Federal Power Act, all public utilities must have rates and terms of service on file with the Federal Energy Regulatory Commission. The Electric Quarterly Report is the reporting mechanism for ensuring that.

“The commission requires public utilities to report the terms, conditions and transactional information for all jurisdictional services, including power sales and transmission service, that they provide each quarter,” Cano said.

Cano said he could not speculate or generalize about an entity’s report from quarter to quarter.

Santa Monica, California-based SolarReserve, the owner of Crescent Dunes, said the 100-megawatt project went offline because of a leak from one of the molten salt tanks.

Outage: ‘not a normal length’

In recent weeks, SolarReserve officials did not make themselves available for interviews, canceling a planned visit by the Pahrump Valley Times to the plant off Gabbs Pole Line Road.

“This was definitely not a normal length outage,” Grikas said. “Obviously, the hot salt tank leak is not expected to occur again, which created the lengthy outage.”

SolarReserve never acknowledged on its social media that the plant was down. Many of the company’s social media posts instead promoted Crescent Dunes and its technology, even posting links in April 2017 to a U.S. Department of Energy story touting the plant. That included a headline that partially reads, “Mirage to Reality: Energy Department Investment Brings Crescent Dunes to Life.”

The Las Vegas Review-Journal had previously reported that the plant was supposed to be back online in January.

“There really isn’t much of a story here,”Grikas said after the small leak was discovered days following a special solar celebration event last fall at Crescent Dunes where SolarReserve CEO Kevin Smith announced plans for 10 more solar arrays as part of a new project in Nye County.

The only way the Pahrump Valley Times was able to get information on the plant’s energy output was through public records.

On July 13, Severts said in an email that “the project lived up to one of its most important benefits to our customers – as it produced renewable energy from the sun all night long last night.”

The Crescent Dunes Solar Project, 15 miles northwest of Tonopah, is the largest molten salt power tower project in the world.