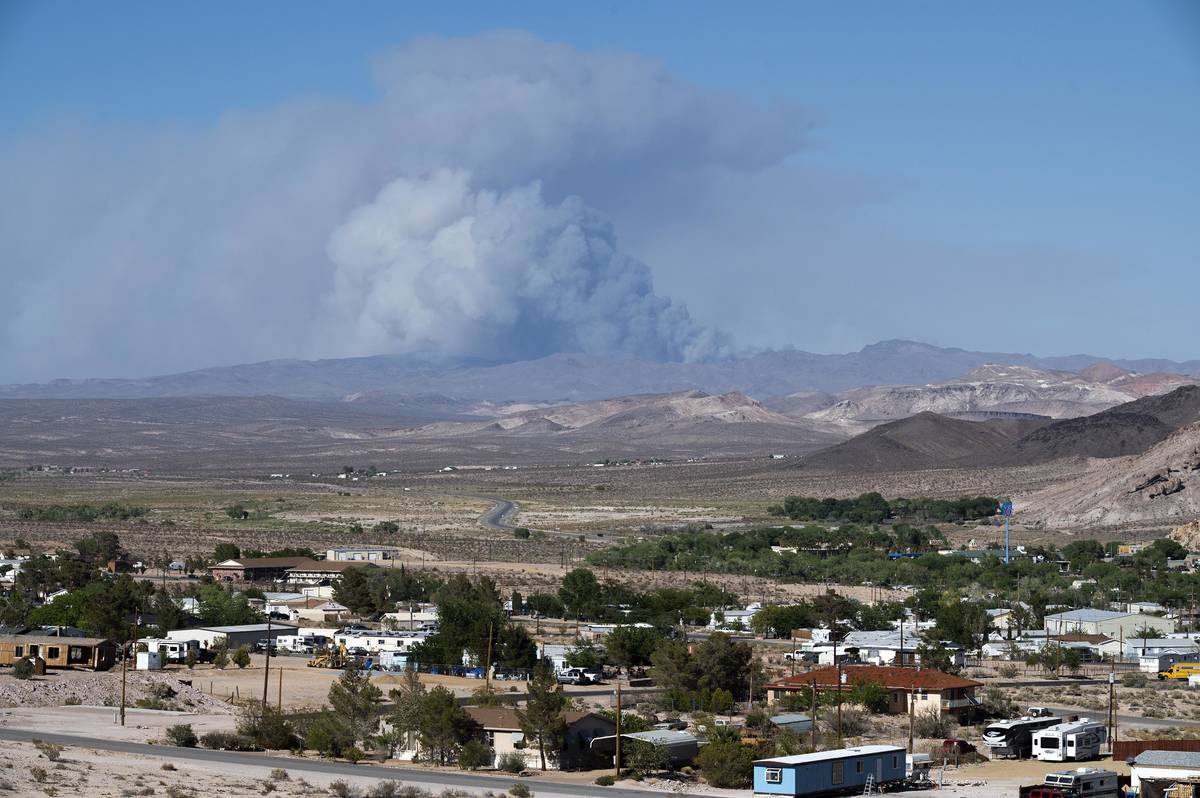 Richard Stephens/Special to the Pahrump Valley Times Smoke from a wildfire on the Nevada National Security Site as seen from Beatty Wednesday afternoon, May 20 around 5 p.m.

UPDATE: Cottonwood Valley Fire now 50% contrained, according to the Bureau of Land Management. For fire information, head to https://inciweb.nwcg.gov/incident/7539/

Three wildfires have sprung up around Southern Nevada in recent weeks with the most recent blaze spreading across parts of Red Rock National Conservation Area, along State Route 160. No structures have been destroyed and no injuries were reported during the wildfires.

The Cottonwood Valley Fire, burning near the Late Night parking lot in Red Rock, along State Route 160, grew to 400 acres as of Monday evening.

“Fire behavior is extreme and is burning in pinion juniper, grass and brush,” the BLM stated on social media.

Two other wildfires have struck in the region in the past several weeks: the Cherrywood Fire, now 100% contained, in the Nevada National Security Site, and the Sandy Valley Fire, 92% contained as of Tuesday at 2 p.m.

According to the Bureau of Land Management, the blaze started at 11:08 a.m. on Monday and was about 50 acres in size at that time. The blaze was about 20% contained as of Monday at 7 p.m.

More than 140 firefighters from the BLM, the U.S. Forest Service, National Park Service, Nevada Division of Forestry and Clark County were actively fighting the blaze on Monday.

As of Monday, possible travel restrictions between mile markers 17 and 21 were announced.

According to Tony Illia, public information officer for the Nevada Department of Transportation, he wasn’t aware of any possible closures going forward due to the wildfire.

“Not that I’m aware of,” Illia said. “They have it under control. Just hot spotting and keeping an eye on it. However, the Late Night trails are closed as well as the off-road areas on the northbound side only.”

The Cottonwood fire, as of Monday, was burning within the Rainbow Mountain Wilderness Area and was threatening wilderness, big horn sheep habitat, mountain bike trails and possible springs, the BLM stated.

The wildfire was human-caused and was still under investigation as of Monday, according to the BLM.

Full containment is expected to occur by midday on Thursday. The blaze’s spread was being affected by gusty winds, along with topographic influences, as of Tuesday’s update, which was making its spread “erratic,” according to information in the BLM’s overview of the fire.

The Cherrywood Fire in the Nevada National Security Site was reported as 100% contained as of Monday. The 26,410-acre wildfire began on May 17.

The BLM had transitioned operations back to NNSS Fire &Rescue on May 27 when the blaze was 75% contained, NNSS stated.

“At that time, the remaining 25 percent was of little risk of re-igniting, as the unburned fuel was within the containment line, and the areas that surrounded it had already burned,” NNSS said in a release. “There was no risk to health and human safety, and no offsite risk to the public.”

The 1,380-acre Sandy Valley Fire that started on June 10 is expected to be fully contained by midday Thursday. The fire was over 90% contained on Tuesday.

According to the BLM, the fire was started by target shooting causing a spark in dry vegetation in the Mount Potosi area, near Mountain Springs.