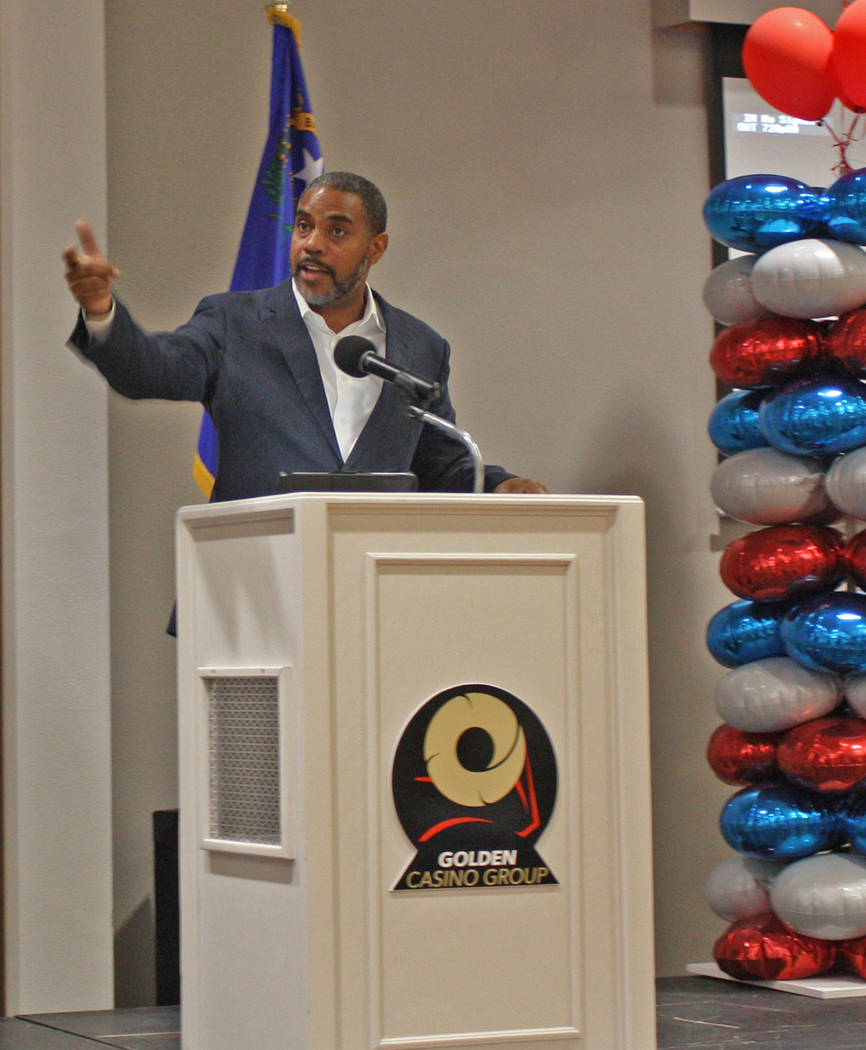 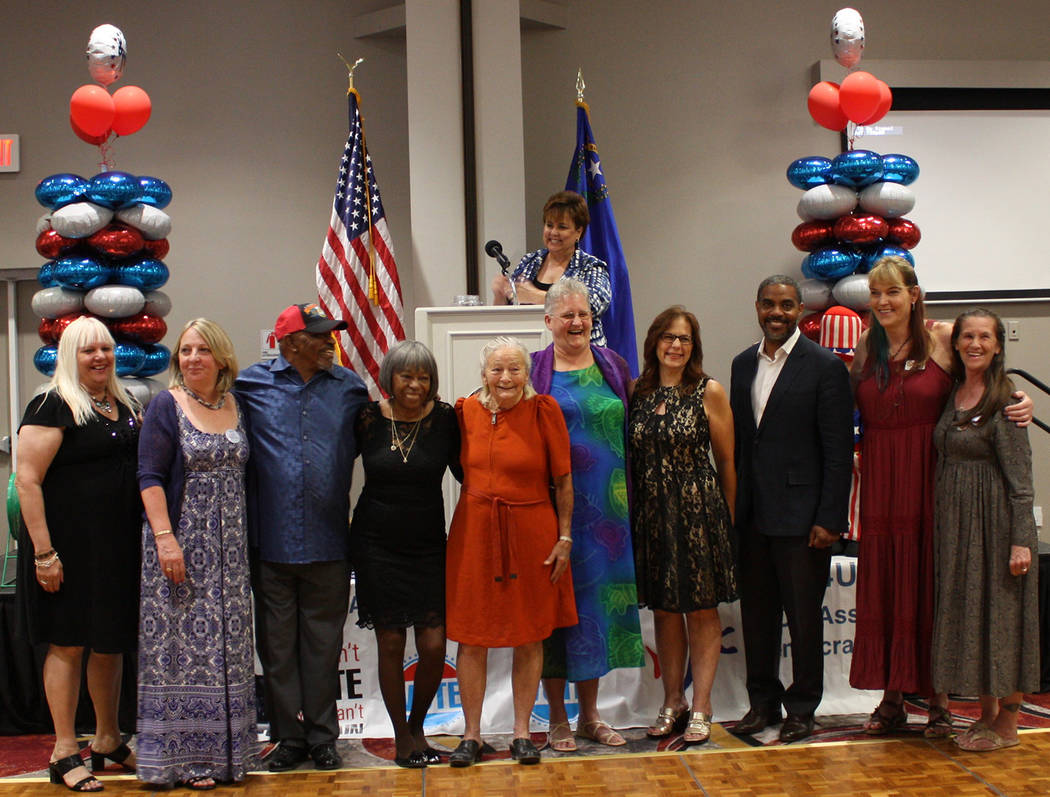 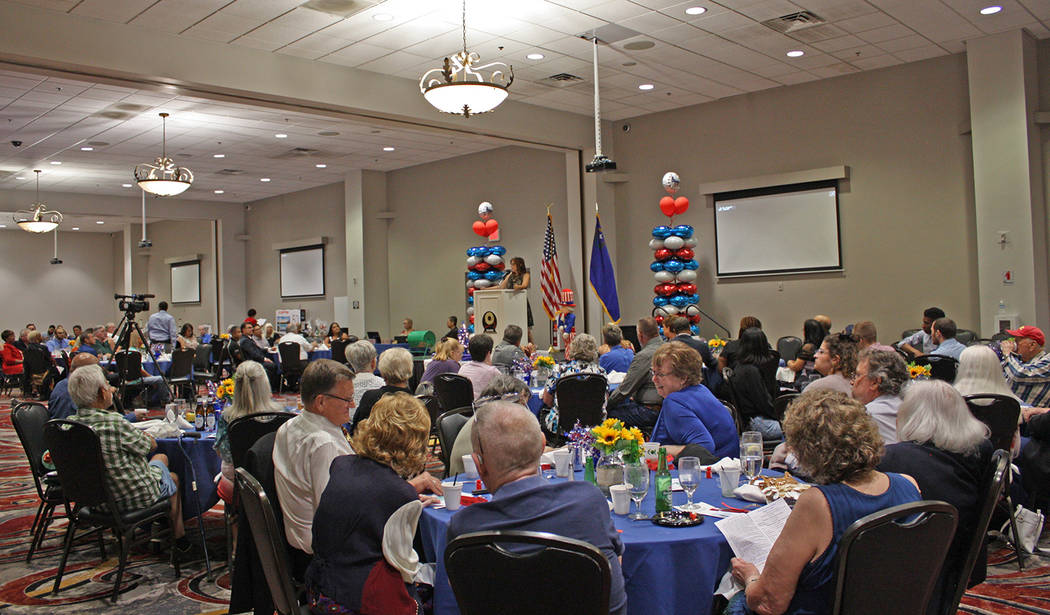 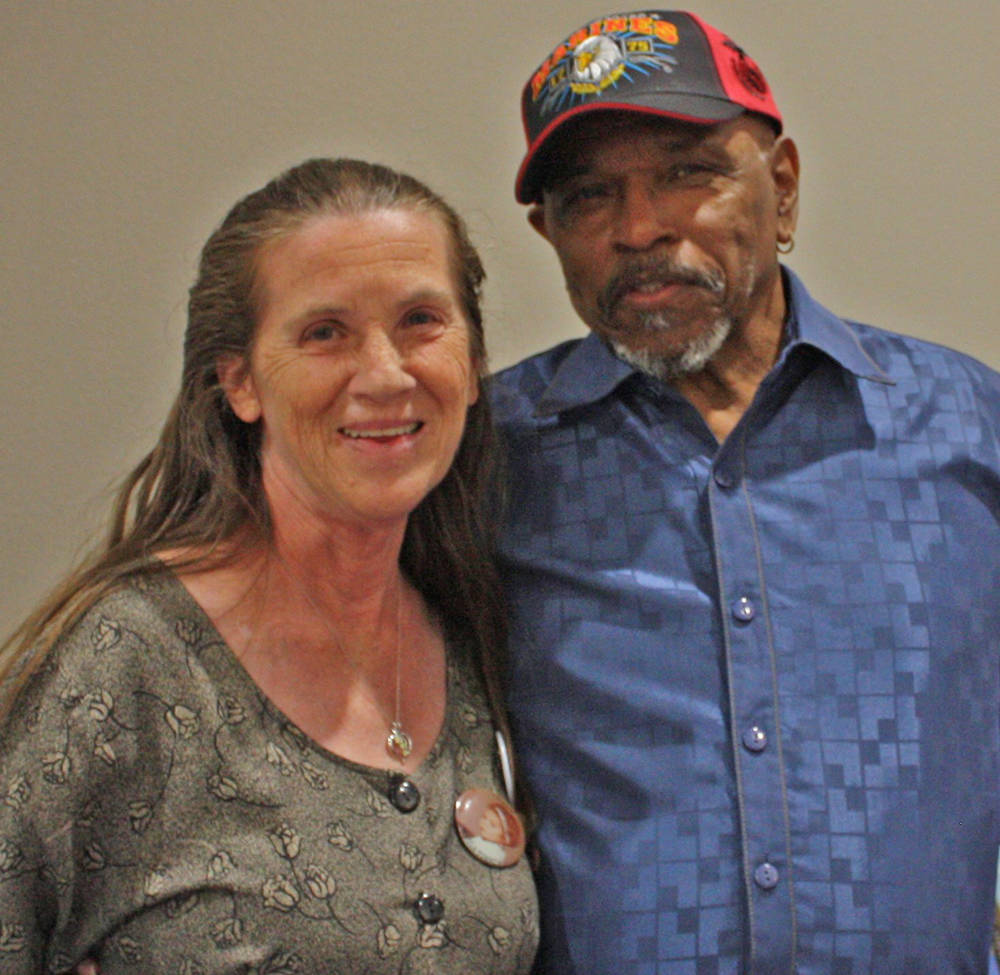 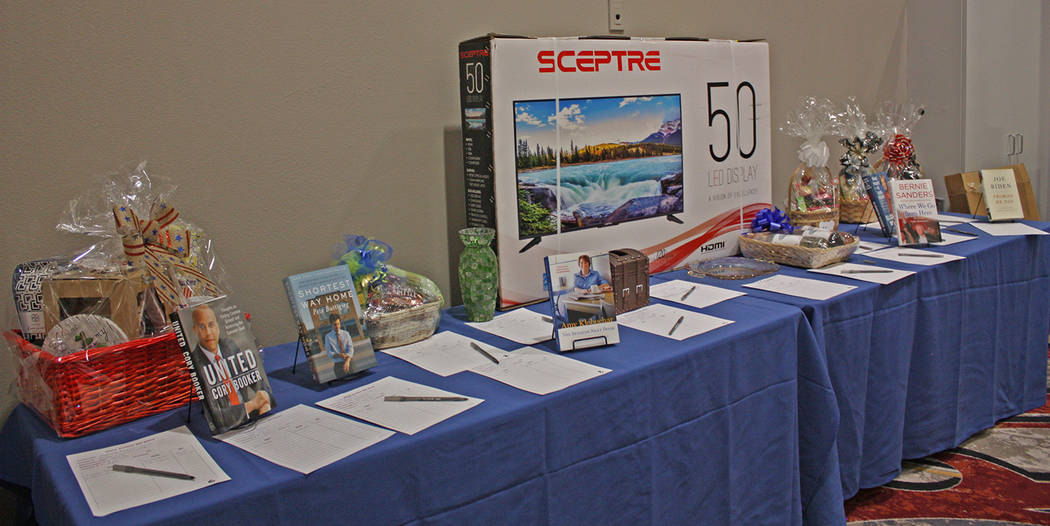 Robin Hebrock/Pahrump Valley Times There was a large variety of silent auction items up for grabs during the Roosevelt-Kennedy Dinner. 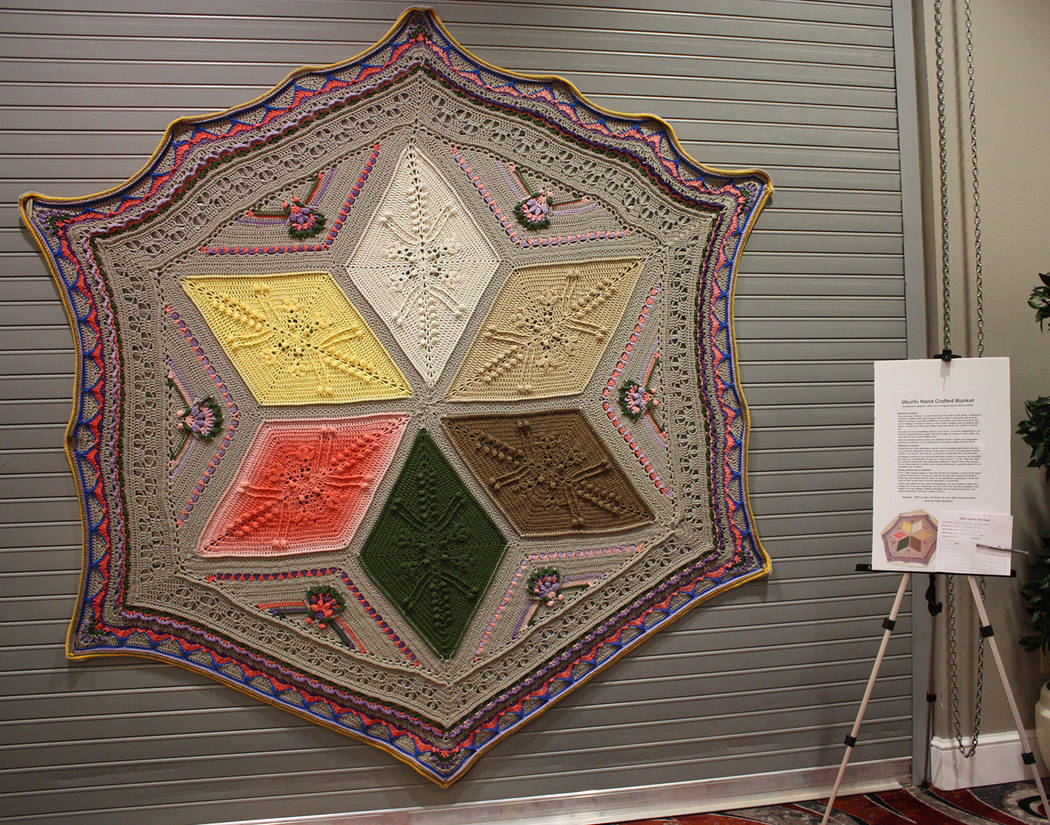 Robin Hebrock/Pahrump Valley Times This "Ubuntu" handcrafted blanket was made specially for the silent auction at the Roosevelt-Kennedy Dinner and is meant as a visual display of the overall concept, which refers to behaving well toward others and acting in ways that benefit the community. 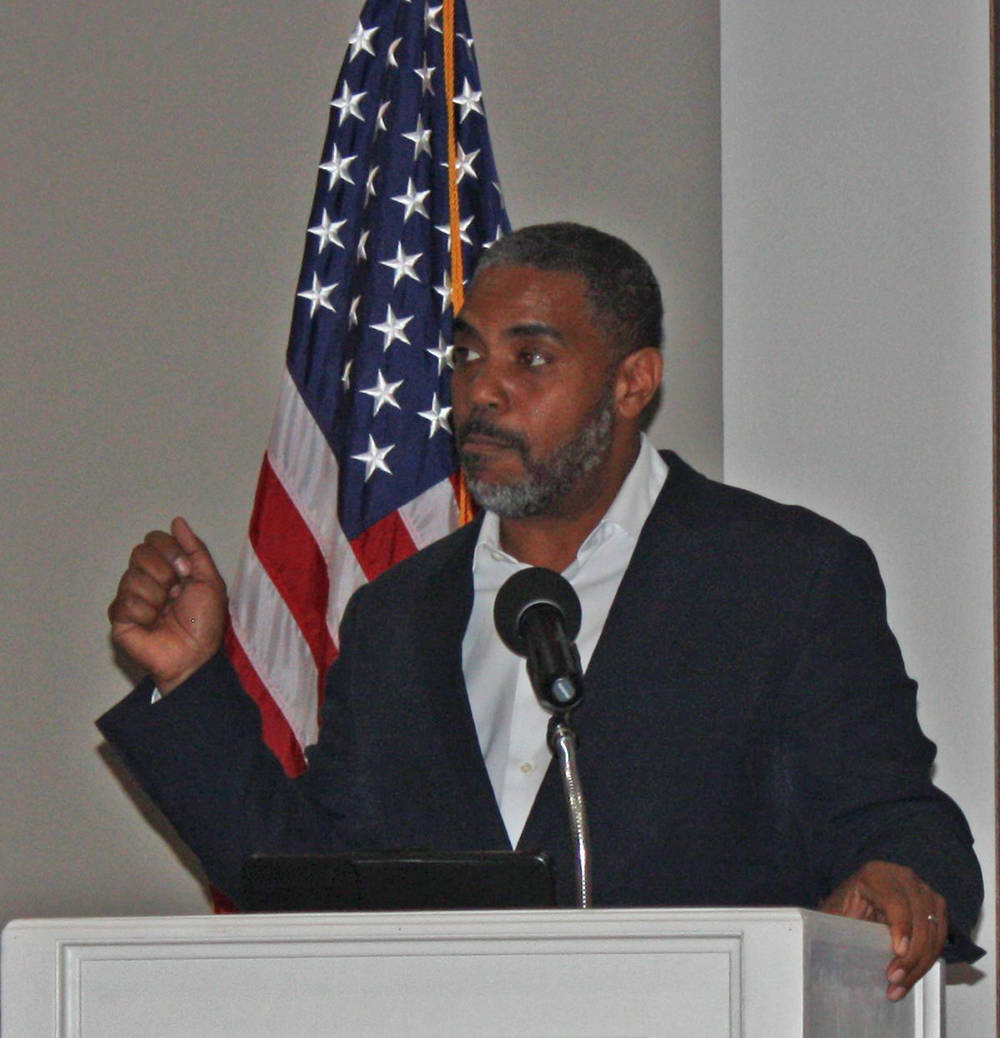 Robin Hebrock/Pahrump Valley Times U.S. Rep. Steven Horsford, D-Nevada, is shown during his visit to Pahrump. He was the featured speaker at the Roosevelt-Kennedy Dinner.

It was a night of celebrating Democratic principles and ideals, with Pahrump residents and notable Democratic Party members from across the state coming together for the Nye County Democratic Central Committee’s annual Roosevelt-Kennedy Dinner.

Held Saturday, Aug. 24 at the Pahrump Nugget Events Center, the Roosevelt-Kennedy Dinner included a prime rib feast along with door prizes and an array of silent auction items for attendees to bid on. The Nevada Silver Tappers even took part, performing one of their traditional patriotic dance routines, to the delight of the crowd.

“Good evening Nye Democrats!” Horsford said with enthusiasm as he took to the podium before an audience of over 100 equally enthusiastic attendees. He extended his thanks to all those who had worked to make the evening possible before starting his speech by highlighting what he felt were some major recent accomplishments of the Democratic Party.

“With the majority of women in the state Legislature, the first in the nation, and with a (Democratic) governor for the first time in nearly 20 years, which you made happen, those are types of achievements that have helped set us on a course to do all the great things that are being done for this state. I have said it once, I will say it again. I believe that this last legislative session was the most productive, the most progressive and the most historic legislative session in our state’s history and I want to commend all of our legislators for their leadership and service,” Horsford proclaimed, to a rousing round of applause.

He also remarked that he was very proud to be a part of the most diverse House of Representatives in the country’s history, which includes more than 100 women, many people of color, those from the LGBTQ community and the first two Muslim and first two Native American women to serve in the House.

Moving on to another topic of keen importance to Democrats, Horsford spoke about health care. He detailed that during a trip to Encompass Health in the valley, he had met a woman only named as Kelly, who had suffered a stroke and is undergoing physical therapy and treatment.

Horsford said he was invited to visit her during her physical therapy session, “And to see firsthand what it means to protect health care in this country. Kelly is relying on Medicare for the care she needs.” Horsford asserted that in the Trump administration’s budget, there is a desire for an 8 percent cut in funding for assisted living programs and in-home care, such as Kelly is utilizing.

“Kelly reminded me today that elections have consequences and who we elect to office matters,” Horsford declared, later stating, “We can debate the different plans that people have but one thing is central. We (Democrats) think health care is a universal right, not a privilege.”

Toward the end of his comments, Horsford also took a moment to urge everyone to take part in the upcoming 2020 census, remarking that he believed participation by all is extremely important.

“Every 10 years, since 1790, we have done a census in this country and we count every person who is in the United States at time of the count, regardless of background, regardless of status, regardless of whether they have a felony background or are homeless, it doesn’t matter. Every single person is to be counted in the census,” Horsford asserted.

He said he felt that the Trump administration’s attempt to have a citizenship question placed on the census had dampened participation. That was why he was asking all those in attendance to encourage their friends, family and neighbors to take part, because there is much at stake, including millions upon millions of dollars in federal funds.

After the evening came to a close, Nye County Democratic Central Committee Chair Kelly Fitzpatrick said she felt the Roosevelt-Kennedy Dinner had been a success.

To learn more about the Nye County Democratic Central Committee visit www.nyedems.org or the organization’s Facebook page. More information can also be obtained by calling 775-751-9966.