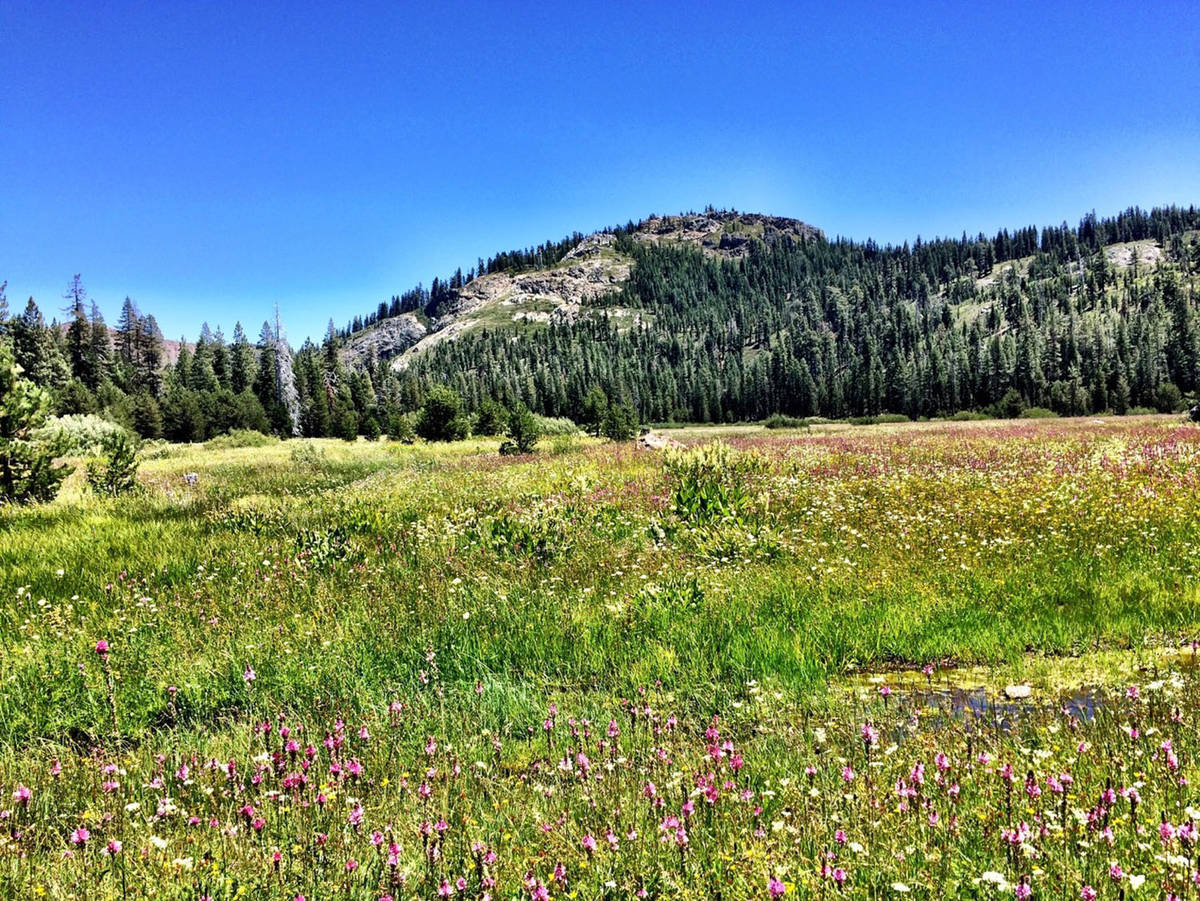 C.C. Reed/Special to the Pahrump Valley Times Researchers from the University of Nevada, Reno study this meadow that sequestered large amounts of soil carbon in the Sierra Nevada.

Meadows in the Sierra Nevada mountains are critical components of watersheds. In addition to supplying water to more than 25 million people in California and Nevada, meadows contain large quantities of carbon below ground. While it has been known for some time that meadows have large quantities of soil carbon, whether meadow soils are gaining or losing carbon has remained unclear.

A new study led by researchers in the College of Agriculture, Biotechnology & Natural Resources at the University of Nevada, Reno, has demonstrated for the first time that meadows throughout the region are both gaining and losing carbon at high rates. Capture and storage of carbon in soil is a natural way to reduce carbon dioxide levels in the atmosphere and combat climate change. Human activities, however, can disrupt natural processes and lead to the loss of soil carbon to the atmosphere.

These results suggest that meadow management might either contribute to climate change or mitigate the harmful effects of increasing atmospheric carbon dioxide.

“Meadows are known for their lush, diverse vegetation supported by soils that stay wet into the summer,” explained UNR doctoral candidate Cody Reed, who led the study. “However, a long history of human activity in many meadows throughout the Sierra Nevada has resulted in drier soils and the replacement of wetland vegetation with sparse grasses and shrubs.”

In research published this week in the scientific journal Ecosystems, Reed and her co-authors, including Associate Professors Benjamin Sullivan and Paul Verburg and Professor Emeritus Sherman Swanson from the university, revealed that meadows with wetland plant communities and dense root mats were large net carbon sinks during the year measured, meaning they removed carbon from the atmosphere. In fact, per acre, the amount of carbon captured in these meadows was similar to rates measured in tropical rain forests. On the other hand, meadows with more bare ground and plant communities associated with drier soil released large amounts of carbon from the soil to the atmosphere.

In the long-term, such changes to the large soil carbon stocks in meadows could add up. And unlike in forests, where most carbon is sequestered in wood above ground, the change in carbon in meadows is below ground. This means meadow soil carbon is less vulnerable to disturbances such as wildfire and may persist in the ecosystem for longer than above ground carbon. At the same time, soil carbon provides other important benefits besides taking carbon out of the atmosphere.

“Worldwide, soils may contain up to four times as much carbon as the atmosphere,” Reed explained. “Soil carbon in meadows also helps improve water quality and quantity, as well as soil fertility to support diverse plant communities important for wildlife and grazing.”

The research could help meadow restoration practitioners identify meadows in need of conservation to maintain soil carbon gains and meadows in need of restoration to prevent additional losses of soil carbon to the atmosphere. The researchers estimate that three acres of surrounding forest are required to offset the amount of carbon lost by one acre of degraded meadow. On the other hand, one acre of meadow may sequester as much carbon as six acres of forest.

“Our research shows meadows may be some of the best bang for the buck in terms of carbon management in the region,” Sullivan said. “My hope is that soil carbon sequestration can be integrated with other objectives to achieve management strategies that improve ecosystem functions in meadows.”

Sullivan said he and his colleagues in the college’s Department of Natural Resources & Environmental Science and Experiment Station plan to conduct future research to quantify the impacts of meadow restoration on soil carbon.