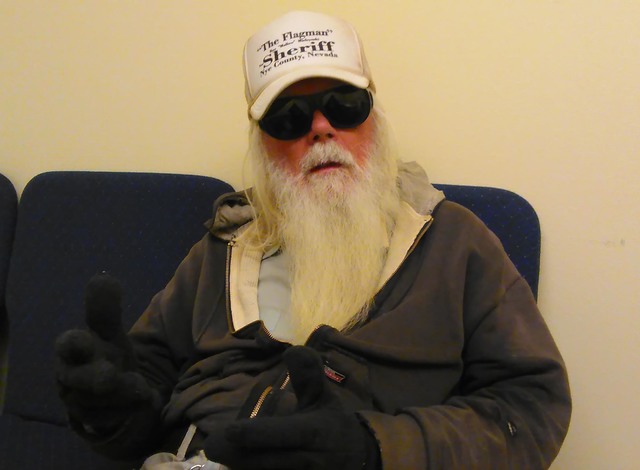 Though he sports a long white beard, Ray “The Flagman” Mielzynski insists he’s not Santa Claus even though he offered to pay a $6,000 fine for convicted felon Anthony Greco this week. Judge Robert Lane is considering Mielzynski’s proposal. Selwyn Harris / Pahrump Valley Times

Perhaps you’ve seen him standing along the roadway while holding the American flag and waving at passing motorists over the years.

Longtime Pahrump resident Ray “The Flagman” Mielzynski is also a mainstay at the courthouse, keenly observing the machinations of court proceedings.

Though Christmas Day is roughly a week from now, Mielzynski provided a gift to one man facing possible jail time.

Anthony Greco was convicted of insurance fraud from an arson case dating back to 2010. The conviction was one of three felony charges he was facing from that criminal case.

Though the jury found Greco guilty of insurance fraud, they spared him a conviction on charges of arson as well as aiding and abetting.

This week, Greco appeared back in Judge Robert Lane’s courtroom to explain why he was not paying the fines as part of his conviction, as failure to pay would result in a probation violation and jail time.

During Monday’s hearing, Mielzynski offered to pay Greco’s fine, which he noted was $6,000.

Both have known each other for close to 10 years.

“About two weeks ago, Judge Lane said that he wasn’t doing what he was supposed to do, and gave Greco eight consecutive weekends in jail,” Mielzynski said. “Lane told him if he did not find a job at the end of those eight weekends, he was going to send him up for the original sentence which was 19-to-48 months at the High Desert Detention Facility.”

“He has diabetes problems, which is on record and he also had major surgery,” he said. “He has not been paying on the fine and that’s why he violated his probation. Judge Lane said that Greco insulted the court by not paying anything on the fine so he sentenced him to the eight consecutive weekends.”

After years of sitting in on hearings in Lane’s courtroom, Mielzynski said he could tell that Lane was ready to send Greco to the detention facility.

“I knew Lane was about to drop the hammer on him but I waited ‘til the last minute before I said anything,” he said. “I finally stood up and said that I’m a friend of the court. I asked Lane to let me be responsible for his fine and not to lock him up.”

Mielzynski said he felt he may have unintentionally put Lane on the spot after speaking up, while noting Lane did agree to take the offer under consideration.

“I think it’s silly to go to prison because you can’t pay a fine,” he said. “It was nothing magnanimous on my part. I just realized that he’s up against the wall. Greco has no money and he’s taking care of his mother, who is in hospice. It’s not like I have money to toss away, but it’s the right thing to do and that’s why I did it. Even though I’m able to come up with the full $6,000, by selling some real estate, I would just make the minimum payments.”

Additionally, Mielzynski said he did not tell Greco of his intentions.

“He didn’t know I was going to do it, so we never discussed paying me back,” he said. “I’m not going to ask for any money from him because it’s not my way. I’ve known Greco for about seven or eight years. At least he has some peace of mind right now.”

It’s not the first time Mielzynski has gone to bat for someone facing jail time.

“Years ago I used to do the same thing in court, but after a while, I realized that most of the people I was doing it for really didn’t deserve it, but I just felt sorry for them.”