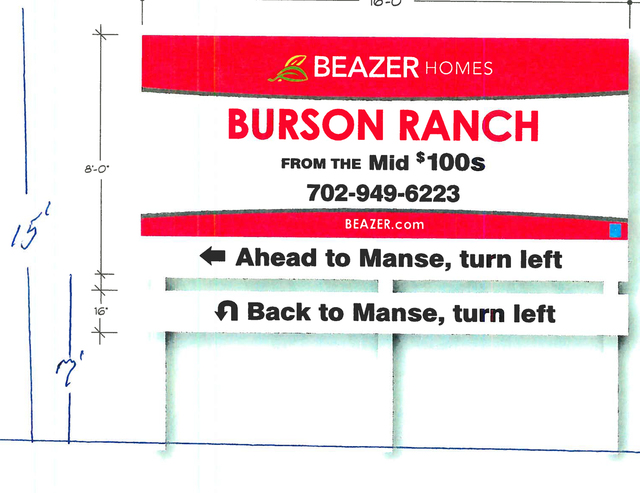 A rendering of a proposed 15-foot off-premise sign for the Beazer Homes Holding Corp. Burson Ranch subdivision that will have to wait after a group of local residents said they haven’t been given voice in the process. Special to the Pahrump Valley Times

An off-premise advertising sign for the Beazer Homes Holding Corp. Burson Ranch subdivision will have to wait after a group of local residents said they haven’t been given voice in the process.

The Pahrump Regional Planning Commission on Wednesday postponed the Conditional Use Permit for the proposed sign that would be located on a 20-acre parcel at 5601 S. Highway 160.

Resident Floyd Hohl, who lives in Rogers Estates, said residents received their notice on Jan. 6 and didn’t have the proper time to prepare a response. Hohl said he had signatures from “everybody in Rogers Estates that do want to reply in writing” to the proposal.

“So we are asking for a postponement of this, and for at least 30 days, so that we can respond in writing,” Hohl said.

He said the notice was postmarked Jan. 3 and arrived from Las Vegas.

“They were mailed on Dec. 30 from Pahrump and had to go to the post office in Las Vegas and they got mailed back out here. We have to postmark them no later than 10 days prior to the meeting, so we met our section by sending them on Dec. 30,” said Celeste Sandoval, administrative secretary at the Nye County Planning Department.

Hohl argued that the residents “have a right to respond in writing.”

“This is the only area where you want to put a sign that involves residents within 300 yards. So, I think this will be important for you at least to hear,” he said.

“A thirty-day postponement I don’t think would hurt anybody and it’s something that we should have,” Hohl added.

Some members of the commission objected to Hohl’s concerns.

“I see no valid reason to not move on this,” commissioner Bob Adams said.

Hohl didn’t specify whether the objection to the sign stemmed from the proximity of the community to the sign.

The proposed sign is approximately 16 feet in width and 8 feet in height, with 7 feet of ground clearance. The top edge of the sign would be approximately 15 feet above the ground, according to the documents.

Nye County commissioners approved a development agreement with Beazer Homes Holding Corp. for a residential subdivision in Burson Ranch at Tesora in November.

The community is located approximately 2.4 miles from Highway 160. There are currently no signs on Highway 160 or Manse Road to direct people to the project.

The RPC will discuss the item again at the Feb. 15 meeting.