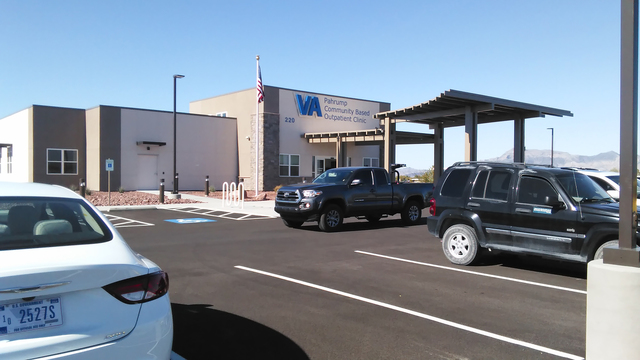 “Veterans can expect and receive the same level of professional care and services they were receiving at the old facility, but with an expanded space for telehealth and primary care services.”

One of the people providing the telehealth services is Pahrump veteran Bruce Cox, a telehealth clinical technician.

Cox said the opening of the facility was a long time coming, for the $12.1 million facility after the old VA clinic on Calvada Boulevard served veterans for close to 15 years.

Cox served in the U.S. Army from Jan., 1980, to Jan 1992, as a senior medic for a field artillery unit during Operation Desert Storm.

“The old facility just started out as just a couple of doublewides that were put together,” he said. “It was really tight and the waiting room was extremely small. But to move into this building last week, it’s amazing and it’s probably three times as big as the old facility. We definitely have room to grow into it.”

Cox also said that though veterans can and will receive valuable services locally, some may still have to visit veteran facilities in Las Vegas for particular specialized services.

“Many veterans from time to time were forced to drive into Las Vegas to seek their care,” he said. “It’s the same way with this new facility, but it’s a much larger facility. Even now, you may still have to go to Las Vegas for some types of services and specialty care.”

The clinic’s staff spent much of the past several weeks transitioning into the new facility, which included installing new furniture and equipment, ensuring compliances with health and safety procedures and training staff.

Ramey meanwhile, said staffing levels in Pahrump will not see a decline as a result of the location change.

“However, with the expansion of space for telehealth and use of other technologies, such as secure messaging and MyHealtheVet, the VA anticipates being able to provide veterans in Pahrump with additional access to primary care and mental health services from the medical center.”

The new facility, which broke ground back in January, was attended by federal, state and county leaders, along with elected officials.

“There were no delays and the VA is very pleased as the facility was completed early and turned over to the VA ahead of the original estimated completion date, which was January 2017.”

Ramey also noted that the old VA facility was a leased building, which will eventually be returned to the lessor.