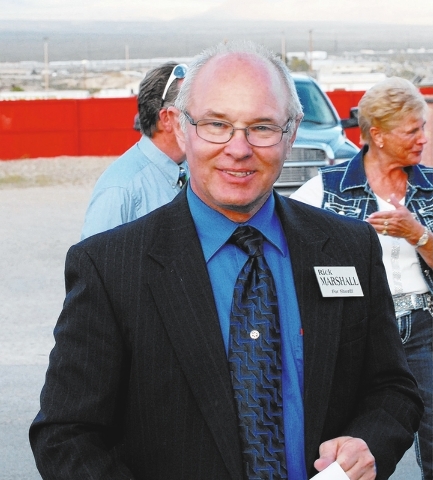 Assistant Sheriff Rick Marshall outspent his opponent Sharon Wehrly on the campaign trail so far according to reports filed with the Nevada Secretary of State’s office due Tuesday.

Marshall reported donating $8,582 to his own campaign in the latest reporting period from June 6 to Oct. 14, raising his contributions to his campaign to $24,751, almost half his campaign cash. Marshall picked up $1,000 contributions from Cash America; from Creekside Investments, a company owned by Pahrump Valley Disposal owner John Shea who owns property where a medical marijuana business is planned and another $1,000 from MM Development LLC, the company proposing the business; and D and T Imports, from Henderson, which lists Pahrump fireworks store president Tim McCoy as president. Sheriff Tony DeMeo gave $300.

A candidate who doesn’t even have an opponent, District 36 Assemblyman James Oscarson, continued to rack up donations of $21,283 during the latest reporting period, for a total of $49,394. Big donations came from Las Vegas casino companies like MGM Grand $4,000, South Point Hotel and Casino $2,500, Boyd Gaming $1,500, and smaller amounts from various political action committees.

Incumbent District Attorney Brian Kunzi outraised his opponent Angela Bello’s campaign contributions so far, with $41,492 in donations to Bello’s $23,392. Kunzi outspent his opponent $33,820 to only $14,198.

Bello received $5,000 from Former Nye County Republican Party Central Committee Chairman Paul Willis, $3,900 from Richard Bushart of Pahrump, a $1,000 donatiion from Bruce Wolfenzon, a law partner and $1,000 from the Pahrump Valley Women Political Action Committee, $750 from Republican Party Central Committee member Pat Kirby, $525 from Linn Jones of Pahrump and $500 dontions each from Earl and Camellia Serino of Henderson, Robert Whitney of Las Vegas, Dr. Jeffrey Gunther of Pahrump and Anthony Greco, who has led the “Dump Kunzi” campaign. Bello donated $630 to her own campaign this reporting period.

Donohue lists a $1,675 contribution from Oliver Gruter of Pahrump and $1,500 from herself. TLC Nevada Inc. gave $560 of in-kind contributions.

Nye County Commissioner Dan Schinhofen raised $18,364 in contributions so far during the campaign and spent $14,342.

County commission candidate Rick Osborne reported raising $4,902 for the campaign so far and spending $3,269. He lists a $1,000 donation from Walden Industrial Capital LLC of Encino, Calif., $750 from dermatologist Dr. Jeff Gunter and $500 apiece from Irene’s Casino, former Assemblyman Ed Goedhart and FTH Corporation Chapel of the Bells in Reno, which is George Flint with the Nevada Brothel Association.

Merlino’s donations this reporting period included $400 from the Pahrump Valley Republican Women, $250 from state treasurer candidate Dan Schwartz and $200 from Chuck and Michelle Thorn. Winn doesn’t list any donations above $100 which have to be itemized.

Nye County assessor candidate Sheree Stringer lists $6,967 in donations and $16,934 in expenses so far in her campaign. Stringer doesn’t list any contributions over $100, but there is an in-kind contribution of $750 from Wulfenstein Construction.