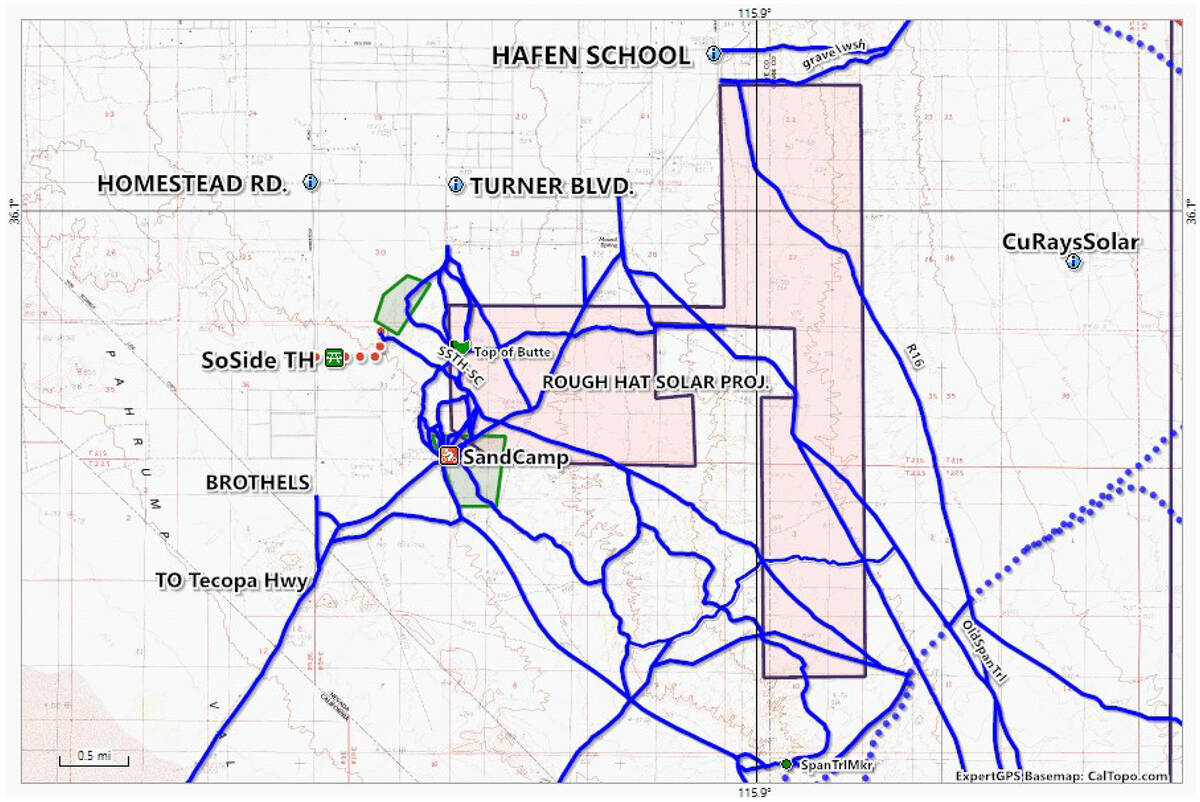 Special to the Pahrump Valley Times This map shows the proposed location for the Rough Hat Nye County Solar Project, which, if approved, would border parts of the southern end of the valley and interfere with existing recreation trails as well as environmental elements such as mesquite groves, Joshua trees and desert tortoise habitat.

The town of Pahrump is bordered by thousands of acres of land managed by the Bureau of Land Management and these lands have become the target of a variety of solar energy projects in recent years, with yet another slated for nearly 3,400 acres near the southern border of the town, dubbed the Rough Hat Nye County Solar Project.

While renewable energy is something that many support, the locations selected for these kinds of projects are often a source of intense debate and contention and the Rough Hat Nye project, proposed by Candela Renewables, is proving to be no exception. Members of the Pahrump community, including those who sit on the Pahrump Public Lands Advisory Committee, are already expressing their dismay over the acreage chosen for the Rough Hat Nye project and one member, Robert Adams, is urging the community to speak its piece as the approval process moves forward.

“A solar project developer wants to build a 3,000-acre solar generating plant right on Pahrump’s doorstep,” Adams, who sits as the secretary for the Pahrump Public Lands Advisory Committee, told Nye County commissioners and the public during the commission’s Tuesday, Oct. 5 meeting. “It’s the Rough Hat Solar Plant and the public comment is just beginning on this. The Pahrump Public Lands Advisory Committee is going to be taking that up the next meeting, which is next Tuesday at 5 p.m.”

Adams is far from the only one to harbor some concerns about the proposed solar field, which, as he noted, would impinge on the south side of the town of Pahrump and would disrupt an array of existing trails utilized by recreationists in the area.

In fact, the trails on the southern end of the valley are so popular that in 2019, the town and county worked to develop the South Side Trailhead, the town’s very first such destination, aimed at allowing equine enthusiasts a safe and secure place to park their vehicles and unload their horses before striking out into the desert. Many off-highway vehicles utilize the same trails.

These lands act as a migratory corridor for many kinds of birds, too, and are also likely to be home to endangered desert tortoise populations. Additionally, this land, which some label as nearly pristine desert, harbors mesquite woodlands and old Joshua trees, which would be affected by solar field development, a point with which the organization entitled Basin and Range Watch has already taken issue.

Those interested in getting involved are encouraged to head to the Pahrump Public Lands Advisory Committee meeting next week to learn more about the committee’s stance on the project and its potential impacts on public lands so dear to the residents and visitors of Pahrump.

The Pahrump Public Lands Advisory Committee meeting is set to begin at 5 p.m. on Tuesday, Oct. 12 at the Nye County commissioners’ chambers in Pahrump, 2100 E. Walt Williams Dr. An agenda for this meeting can be found online at www.pahrumpnv.org by clicking on the “Advisory Committees” link under the “Government” drop-down menu.