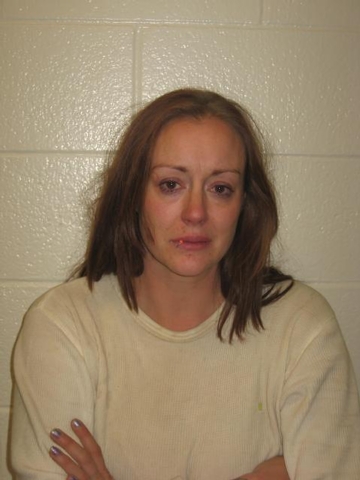 A Round Mountain resident kept Nye County law enforcement at bay for more than 90 minutes after shooting her husband Sept. 28 before surrendering.

Mandy Elizabeth Jean Kringlie surrendered to Nye County Sheriff’s deputies and SWAT and charged with felony counts of attempted murder, first degree child abuse or neglect, and battery with a deadly weapon. She was also charged with misdemeanor counts possession of less than one ounce of marijuana, possession of drug paraphernalia and resisting public officer.

Kringlie is currently being held in the Nye County Jail in Tonopah on $37,600 bail.

Deputies received a report of domestic violence at the R.O. Ranch at approximately 5:15 a.m. According to the police report, the victim’s mother allegedly told deputies that Kringlie shot her husband, Scott, with a .357 handgun, sending him to the hospital for treatment of his injuries.

The victim’s sister told police that Kringlie allegedly had a propensity for violence and that deputies should take caution. The victim’s sister reportedly told deputies that the victim had been injured and was at a local medical facility seeking treatment for the gunshot.

A neighbor reportedly told deputies that the victim woke her at approximately 5 a.m., stating that his wife, Kringlie, had attempted to shoot him. The neighbor explained that she saw a number of injuries to the victim’s face, neck and torso.

The neighbor told deputies that he took the gun from Kringlie and subsequently called police. When deputies arrived, they secured the gun. Deputies, working in conjunction with the Nevada Highway Patrol, determined that a neighbor had given Kringlie a ride back to the residence and attempted to make contact with her.

Deputies were informed that Kringlie had access to a number of weapons, including a .410 shotgun. When deputies approached the residence, they saw Kringlie standing in the doorway with her 12-year-old minor child. Law enforcement told the minor child to move away from the residence, at which time Kringlie slammed the door and locked it.

After multiple attempts to make contact with Kringlie to no avail, deputies made forced entry into the residence and were unable to locate Kringlie. While deputies and troopers were outside the residence, they learned through dispatch that the residence had a hidden passage in the house that led underneath the house.

It was determined that Kringlie had barricaded herself in the residence and deputies and highway patrol troopers vacated the surrounding residences for officer and citizen safety. The SWAT team was called to respond and attempt to negotiate with Kringlie.

After making contact with Kringlie, she was taken into custody without incident.

Deputies discovered that Kringlie had marijuana and other drug paraphernalia in her purse that she gave to the 12-year-old child to hold.