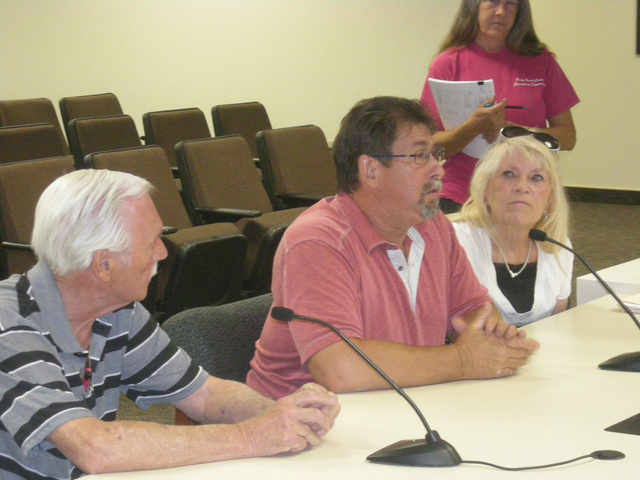 Many times in community planning battles it comes down to residential versus commercial.

But last Wednesday’s Pahrump Regional Planning District meeting featured a new twist: a request to convert property from commercial to residential that doesn’t conform to the existing master plan adopted in 2003, but conforms to the new master plan update.

The RPC approved the revised 2014 master plan update but the county commission has yet to schedule it for a public hearing, after which it will be official.

The RPC ended up rezoning only four lots surrounding the property owner at 6111 Tequila Way instead of the original 22 parcels that were a mixture of general commercial, neighborhood commercial and mixed-use zoning. Principal Planner Steve Osborne said a property owner wants to place a manufactured home on a lot zoned general commercial. Osborne said 14 properties had vacant lots, five had single family residences, two had multiple residences and there was one parcel with an active, commercial business.

Osborne said the updated master plan designates all 22 parcels as rural density residential, intended for homes with parcels one acre or larger. Planning staff had recommended the zone change not become effective until the 2014 master plan revision is adopted.

Anthony Greco, a property owner at 5980 Pahrump Valley Blvd. at Thousandaire Boulevard, spoke on behalf of leaving the area commercial.

“I was mixed-use commercial then somebody decided to come up with a master plan and knock it down. I was never reimbursed for what the land is worth. I don’t have a problem if he wants to drop his zoning down,” Greco said. “You’re going to take all this commercial property away so you can’t build any jobs. I can’t understand why he would want to build a house in the middle of a commercial area.”

Jean Woods and John Stanton Jr., who formerly operated Valley Homes, a manufactured home business in Pahrump, said they purchased 6.25 acres on Thousandaire Boulevard as commercial property for future development and paid commercial prices. Woods purchased another 2.5 acres with a partial commercial structure that she said would connect to parcels to be used for a future commercial development, like a nursery, strip mall or manufacturing facility.

“We gave the easements to Valley Electric under duress. They said they were going to take it if we didn’t give it,” Woods said. “They took it (the transmission line) right through the middle of the property so we didn’t have a choice.”

But Kat Deegan was for residential development. Deegan said when she found out she abutted commercial property she built a wall and a hedge. She said there’s a lot of vacant commercial properties in the valley.

Ricky Kalinowski said he owned his property for 43 years, where he raised chickens that provide eggs to a food bank. He talked about plans to open up a small recreational vehicle park for veterans in the future.

In other business, the RPC voted 5-1 to deny a conditional use permit for a commercial kennel at 2251 W. Blosser Ranch Rd. that was tabled from Feb. 12. Board members said applicants Adan Salcido and Carl Grubb didn’t resolve concerns by animal control officer Susan Ryhal. RPC member Joe Goode Sr. voted against.

The RPC approved a parcel map carving off 2.9 acres from a 20-acre lot at 661 N. Ben St. where VEA plans to install transmission line. The property owner, the George Brizendine Trust, granted VEA a temporary easement during construction of the line but felt uncomfortable owning the small parcel, planner Beth Lee said.