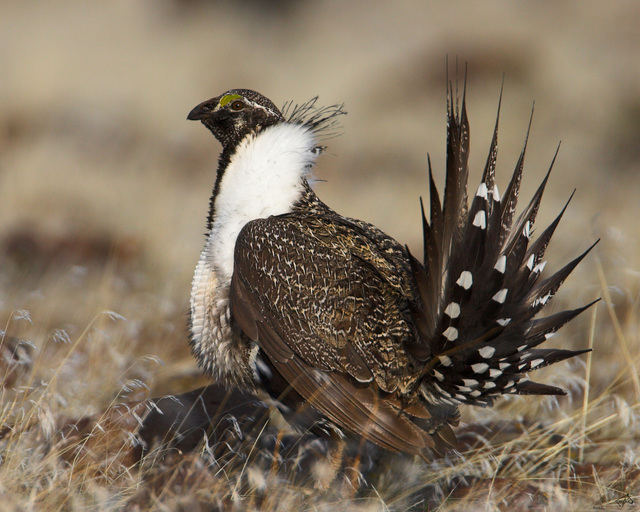 WASHINGTON — After their first draft drew mixed reviews, Nevada’s senators are circulating a new plan that aims to avert or at least mitigate harm across the state if the sage grouse is listed by the government as an endangered or threatened species next year.

Democrat Harry Reid and Republican Dean Heller are asking Nevada state and county officials, industry groups and land advocates for feedback on a reworked bill to boost habitat for the chicken-sized range bird. Officials and land use industries across the West are scrambling on strategies to avoid a listing that would lock off millions of acres from miners, ranchers, energy developers and others in states whose economies are tied to the land.

The second draft went out in late June, with an Aug. 15 deadline for comment. “That doesn’t mean there won’t be a third draft,” Heller said.

The Washoe County Commission passed a resolution favoring the plan. But it has been a harder sell in other rural counties, where leaders expressed particular wariness over amounts of proposed new wilderness. They questioned the bill’s balance between protecting habitat while locking off land from recreation and productive uses.

Heller said the new draft has “much less” wilderness, “but it’s still a large chunk.”

A Reid spokeswoman said the bill seeks to create wilderness beyond the current identified sage grouse habitat “so that we don’t continue to have this problem so it’s not just a Band-aid.”

The bill contains other strategies as well. It would require the BLM to offer for sale a minimum 105,000 acres across seven counties in central and northern Nevada, with anticipated millions in profits earmarked for state conservation and for federal agencies to spend on restoring grouse habitat.

It also gives federal land managers the authority to collect user conservation fees of $500-$750 an acre on land identified as sage grouse habitat. But it emphasizes the fees as “one of many other options” to mitigate use of the land, according to a bill summary.

The U.S. Fish and Wildlife Service is under court order to decide by September 2015 whether the sage grouse should be put on the endangered species list, or designated as threatened as its habitat is consumed by wildfires and human intrusion.

Heller said the senators will introduce their bill “when everybody agrees to it. I don’t know if that’s going to be within the next couple of months but I will say we are getting closer. My goal is always to get full consensus, especially on lands bills because they have such an impact on those counties.”

Nye County Commissioner Lorinda Wichman, president-elect of the Nevada Association of Counties, called it a wilderness bill, not a bill to conserve sage grouse. Wichman said representatives of Heller and Reid briefed county officials, environmental groups and the Nevada Mining Association on preliminary drafts of the bill. The congressmen have maps showing sage grouse habitat overlaid by maps of the proposed wilderness areas and they aren’t the same, she said.

“All these new wilderness areas in Nye County, very little of that is considered sage grouse habitat. At this point I do not see how that bill is going to help with the listing of the sage grouse or to keep it from being listed in Nevada,” Wichman said. “This is a wilderness bill. There is nothing in it that will stop the sage grouse from being listed and that only confirms my original belief that this is not about the sage grouse; it is about controlling the land, period. Unfortunately, it is extremely rare that I disagree with Senator Heller, but in this case I do.”

The BLM is proposing to release some wilderness study areas but Wichman said that’s only about one-tenth of the acreage in Nye County.

“They don’t qualify as wilderness anyway; the BLM already determined they don’t have characteristics for wilderness but that was years and years ago. But that was never released. Apparently it takes congressional action,” she said.

A letter to Heller dated May 6 from Commission Chairman Dan Schinhofen said a listing of the greater sage grouse would be made on an 11-state basis, not state-by-state unless the bill directs the U.S. Fish and Wildlife Service to do otherwise.

“Congress has the power to say this bill will prevent listing or to mitigate some of the effects of a listing, but this bill in its current form does neither. As a practical matter, this bill helps to perpetuate the myth that humans and activity on public lands is the cause of the decline in GSG populations. The agencies of the federal government have ignored the scientific evidence and comments from local and state governments that show the GSG populations thrived under the settlement and grazing in the West. The declines in recent years are mostly due to over- regulation and mismanagement by the federal agencies,” the letter states.

Nye County states the proposal to designate the wilderness study areas as wilderness is contrary to their policies on public lands. The county criticized the restrictions on land use and additional costs of $500 per acre in general habitat or $750 per acre in priority habitat, which will act as a future deterrent to development. Property owners in southern Nye County pay a mitigation fee for disturbing desert tortoise habitat.

The county doubts that livestock grazing will be allowed to continue to wilderness areas, as stated in the bill. Schinhofen said the best way to manage the species is at the local level, citing the success in preventing the Amargosa Toad from being listed.