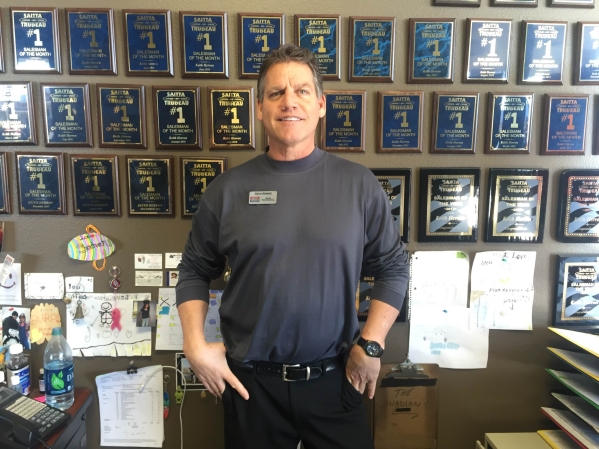 One local car salesman has enjoyed the title of salesperson of the year for the past several years and last year wasn’t any different.

Keith Herron was named Saitta Trudeau Chrysler, Jeep and Dodge’s salesman of the year for 2015, winning the award for the past six years. For his big win Herron received a bonus, and an award for his wall.

Trudeau credits his customer relations with why he has been so successful selling so many automobiles over the years.

“What it comes down to over the years is that I have so much repeat and referral business,” Herron said. “I tend to have more opportunities than somebody who just started working.”

Herron is a strong believer in satisfying the customers’ buying needs and looks to show that to the potential buyer almost instantly.

“There is never a second chance for a first impression, so I really try to come off very positive and very friendly,” he said. “Then over time it’s just about follow-up and customer service.”

Herron said he likes to reach out to his customers occasionally, to let them know that just because they’ve already purchased a vehicle from him, that their needs are still important to him.

“It’s really about the service after the sale,” he said. “Over time that really adds up. It is really about referral business. It is an ongoing process. I chose this as my career, so I try to be as professional as I can.”

Trying to keep tabs on his customers, Herron said he tries to make contact with each of his customers about every three to six months.

Herron explained that a family he’s been dealing with for several of the 13 years he’s been with Saitta Trudeau, which has netted him the most buys from a customer, is a perfect example of the referral business model.

“The record is maybe 20 to 25 vehicles to one person,” he said. “That’s combined with a family who works dedicated with me, so around 25 to just one family.

“It started with Don Trudeau. He gave me one of his first customers from when he was a salesman in Las Vegas. He gave me that solid customer and I’ve had that customer for 10 or 11 years. I’ve sold to his kids and now his grandkids are involved. It’s just getting bigger and bigger.”

Although making money is the key point in any business, Herron explained that he often looks out for the consumer more than the company he’s working for.

“The deal has to be made on the customer’s terms. You have to find the right vehicle and the right monthly payment.”

Herron has been involved in the customer service realm for much of his working life, and although he seems to have a natural knack to sell, he said it comes down to personality.

“I think it’s more about getting along with people. I think you have to be pleasant and people have to like you and trust you.”